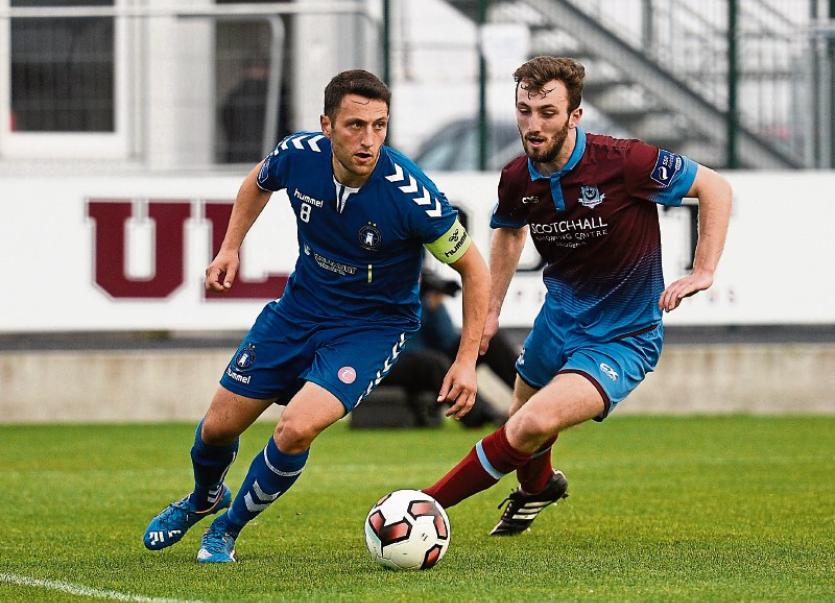 LIMERICK FC have confirmed that captain Shane Duggan has signed a new deal which will see him remain at his hometown club for a fourth season.

Duggan skipped the Blues to the First Division title in 2016 and the midfielder is looking forward to leading the club in their return to the Premier Division of the SSE Airtricity League next season.

Twenty seven-year-old Duggan joined the Shannonsiders in October 2013 and in the campaign just gone played 20 times as he led them to the SSE Airtricity League First Division title in, losing just one game along the way.

Duggan – who contributed six goals to that league success – was rewarded for his performances by picking up the PFAI First Division Player of the Year as Limerick returned to the top flight at the first time of asking.

The Norwood Park native wants to make it another year to remember in 2017.

“Last season I had the option of signing back again so there was never going to be an issue; I’m happy now to get it done,” Duggan said.

“The time has gone around quickly. I can’t believe it will be my fourth year already. When I first signed I was welcomed straight away.

“Being from Limerick it was easy to settle in. We had a great season just gone and I’m delighted to be back up in the Premier Division.

“The only disappointment for us was not winning the EA Sports Cup final, especially at home in the Markets Field, but to win the league in the way we did and to get to the final, we can’t complain really with that. Hopefully, we can go one step further next season and win a Cup.”