Famous 27-14 win over touring side at Thomond Park 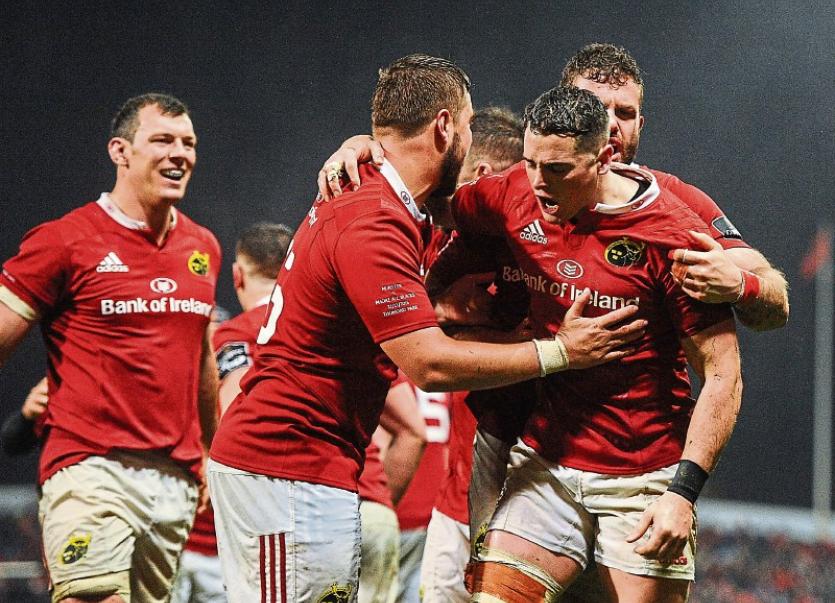 Ronan O'Mahony celebrates after scoring against the Maori All Blacks Picture: Sportsfile

MUNSTER scored another famous win over a touring side at Thomond Park when thumping a fancied Moari All-Black outfit 27-14 in wet conditions on Friday night.

The sell-out attendance of 25,600 lapped it up as Munster scored four tries in becoming the second Irish side to stun New Zealand opposition in the space of just six days following the national side’s historic first ever win over the All-Blacks in Chicago last weekend.

Among the highlights on a memorable night was a touching presentation of a New Zealand jersey with the initials ‘AF’ on the back by Maori All-Blacks captain Ash Dixon to Anthony Foley’s sons Tony and Dan before kick-off.

What a tribute from The Maori @AllBlacks as they remember Anthony Foley before the Haka #HistoryInTheMaking #MUNvMAB https://t.co/qFvvQdboY1

Munster played the wet and windy conditions much better than their opponents, winning the collisions, bossing the breakdown and benefitting from an accurate kicking game.

First half tries from Niall Scannell, Darren Sweetnam and a penalty try helped Munster into a 17-14 half-time lead, a strong position given the strength of the breeze the home side played into during the opening period. James Lowe and Ambrose Curtis had touched down for the Maoris.

A 43rd minute penalty goal from Ian Keatley helped Munster into a 20-14 lead. Despite dominating long periods of the second half both in terms of possession and territory, it wasn’t until winger Ronan O’Mahony touched down in the 68th minute that the home side sealed a deserved victory.