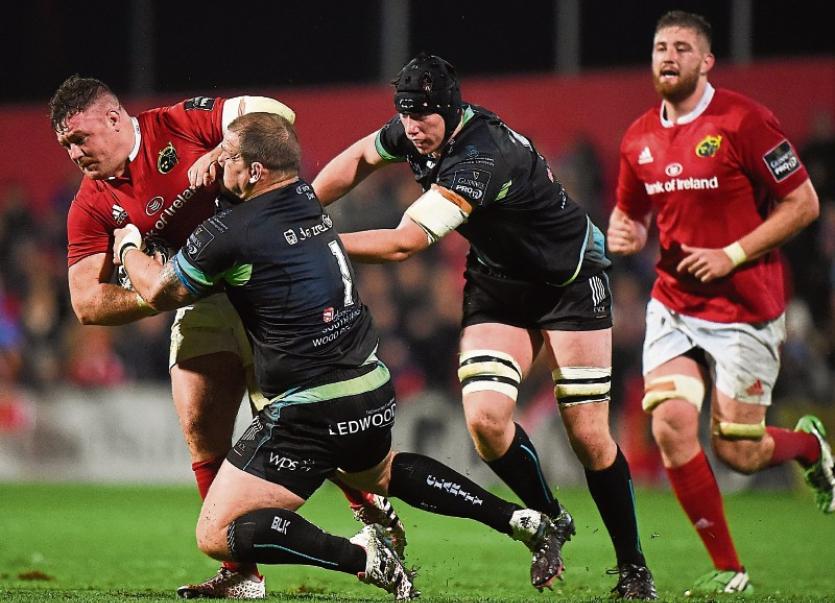 Kilcoyne bagged a try in either half as Munster scored a facile 33-0 Guinness Pro12 bonus point win over the Welsh region at a sold-out Musgrave Park.

It was the first time in eight years that the Ospreys were held scoreless in a game.

Erasmus said: “He (Dave Kilcoyne) has always been super for us. I think ‘Killer’ is a special player and a special personality on the field. He always has energy around him.

“But there is so many guys doing well, Peter O’Mahony is playing well. If I start singling out guys, Duncan Williams for me an unsung hero for the last three or four games, when he came off the bench and when he played.”

Munster’s return to action this Friday night when the Maori All-Blacks visit Thomond Park for a glamour fixture, 7.30pm.

The game looks set to be Munster’s third ‘sold-out’ home fixture in succession.

Erasmus said: “There is a lot of positives but Monday we go into the next battle again (against the Maori All-Blacks), so we can’t get overjoyed about tonight, although we will enjoy it.

“It is such a festival game we are playing next week against a quality side. I think a little bit of a mental break for us for the next two weeks which I think is the right time.”