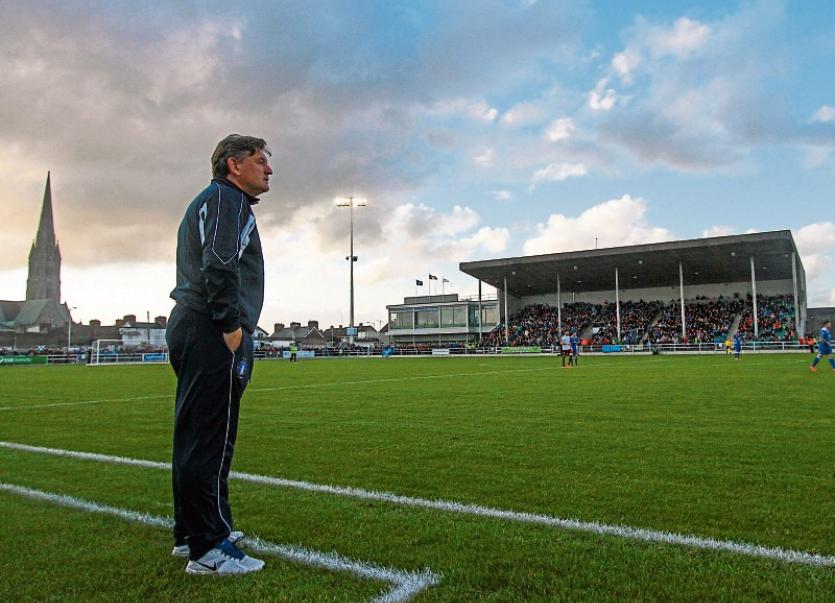 LIMERICK FC manager wants supporters to come out and ‘celebrate the fact that the club is back in the Premier Division’ when the Blues host Drogheda Utd in their final home First Division game of the season this Saturday at the Markets Field, 5.30pm.

Runaway Champions Limerick will to be presented with the SSE Airtricity League First Division trophy at the end of the Markets Field clash which kicks-off at 5.30pm.

The Shannonsiders won the league title with six games to spare at UCD back in August having recorded 20 wins and two draws in their first 22 outings.

Limerick lost their long unbeaten record last weekend when they went down 2-0 to playoff-chasing Cobh Ramblers at Saint Colman’s Park, but they bounced back to winning ways with a youthful side seeing off lowly Athlone Town at home on Tuesday night thanks to substitute Paul O’Conor’s 76th-minute header.

They now face Drogheda who still require at least a point to guarantee a top-three finish.

Limerick FC manager Martin Russell said: “It will be great if people come out and celebrate the fact that we’re back in the Premier Division. We’re there as Champions.

“As I’ve said all along, the lads have represented the club and city in a very good fashion this year, played some very good football, deservedly went up as Champions, and Saturday is that sort of celebration time, really.

“Although we’re lifting the trophy, we still want to win the game and I’ll be putting out a team that I think is capable of that. We’ll give it a go; whether it was Drogheda or anybody else, that’s the way we treat it. The fact that we get the trophy on Saturday it’s a good day for us.”

The Blues fielded six players aged 20 or younger in Tuesday’s 1-0 win over Athlone, four of those among the back five, but Russell expects to be able to recall some more experience this weekend including hometown captain Shane Duggan who returns from suspension.