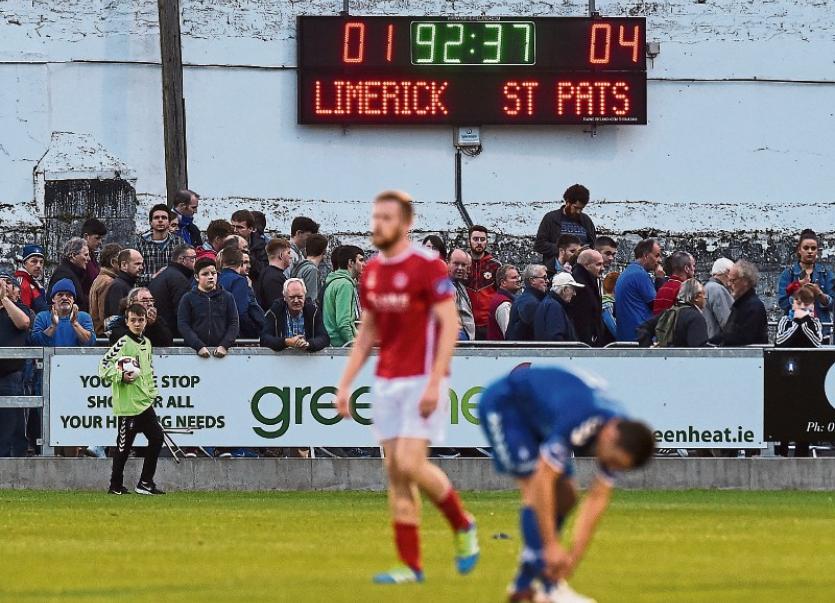 LIMERICK FC manager Martin Russell believed that his side’s failure to grab a two-goal lead in Saturday night’s final was a key factor in their defeat.

Manager Russell also paid tribute to his players workrate and application, saying they had ‘put in a hell of a shift’ in the showpiece final played out before an attendance of close on 4,000.

Afterwards Blues boss Russell said: “I think in the first half we were very good and not so good in the second half.

“Even in the second half we had two great chances to have a two-goal lead in the game, which would have made it very difficult for St Pat’s.

“But we didn’t take those chances and St Pat’s did.

“I am disappointed for the lads because they put in a hell of a shift.

“Going back to the Premier Division next season we know we know there is a gulf and we know we need to improve.

“The lads have done well this season. Today maybe if we took those chances in the second half we would have had a different result.

“When we didn’t take those chances St Pat’s knew they were still in the game. They had got proven players at Premier Division level that do take chances which made a difference today.

“Credit to them, they stuck at it and played well in the second half. I am proud of the effort this group of players put in and given to the club. We will try and build on it now.”

Russell reserved a special word of praise for the Limerick FC supporters.

“The fans this year have been tremendous. They have travelled with us as well to the away games. This is our biggest home game of the season.

“It shows the potential that is in Limerick for people wanting to get behind the football club.

Limerick FC are unbeaten in the First Division this season with now just five fixtures to go. next up for Martin Russell’s side is a tricky away assignment against Shelbourne in Dublin on Friday night.

St Pat’s remain the only club to beat Limerick this season in national competition having earlier knocked the Blues out of the FAI Cup. Pat’s won the league cup for a fourth time on Saturday.