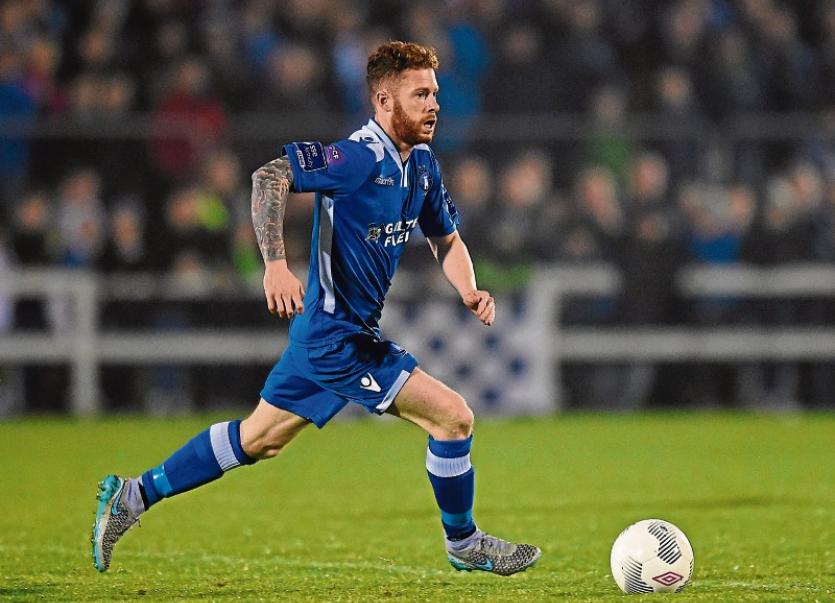 CHAMPIONS Limerick FC eased their way to a 4-0 win over Waterford Utd, thanks to a hat-trick from striker Chris Mulhall before an attendance of 1,071 at the Markets Field on Saturday night.

Man of the Match Mulhall joined John O’Flynn as the club’s joint-leading league goalscorer for the season on 12 after netting twice in the first half before completing his hat-trick from the penalty spot in the 66th minute. Mulhall’s third goal also helped Limerick reach a milestone 100 goals in all competitions for the season.

Aaron Greene was also on target for Martin Russell’s side promoted side as the Blues edged closer to completing an unbeaten season in the First Division.

Limerick, looking forward to life back in the Premier Division in 2017, have scored 81 goals in the First Division this season, averaging well over three goals per game.

There are now just five games to go. This convincing win was good preparation for Limerick’s next fixture, the Saturday, September 17 glamour EA Sports Cup final showdown with St Patrick’s Athletic at the Markets Field.

Limerick made a dream start, racing into a 2-0 lead inside the opening 11 minutes.

The Blues bagged their first goal of the night in the third minute when Chris Mulhall fired home from inside the box. The home side doubled their advantage eight minutes later when Waterford ‘keeper James Hussey failed to hold onto Stephen Kenny’s 25-yard free-kick and an alert Aaron Greene duly scored from a couple of yards out.

Limerick were in cruise control. However, the home side might well have conceded soon after, but home keeper Freddy Hall did superbly to stop a fine shot from the rampaging Toyeeb Mustapha.

Having survived that scare Limerick FC took control of the game soon after. creating a hatful of scoring opportunities.

The Blues were finally rewarded for their industry and endeavour when following an excellent move, heavily featuring Lee-J Lynch, Aaron Greene slipped in Chris Mulhall and the striker made no mistake in netting his second goal of the night to make it 3-0.

Limerick FC supporters in the main stand stood and applauded their side off at half-time, such had been the slick, clinical nature of their first half play.

Limerick eanred the opportunity to add to their tally in the 66th minute when the home side was awarded a penalty. Striker Chris Mulhall duly dispatched the spot kick to complete his hat-trick on the night. It was also the Blues 100th goal in all competitions this season.

Limerick have no game next weekend as their scheduled league opponents Cobh Ramblers are in FAI Cup quarter-final action. Then the EA Sports Cup final takes centre stage.