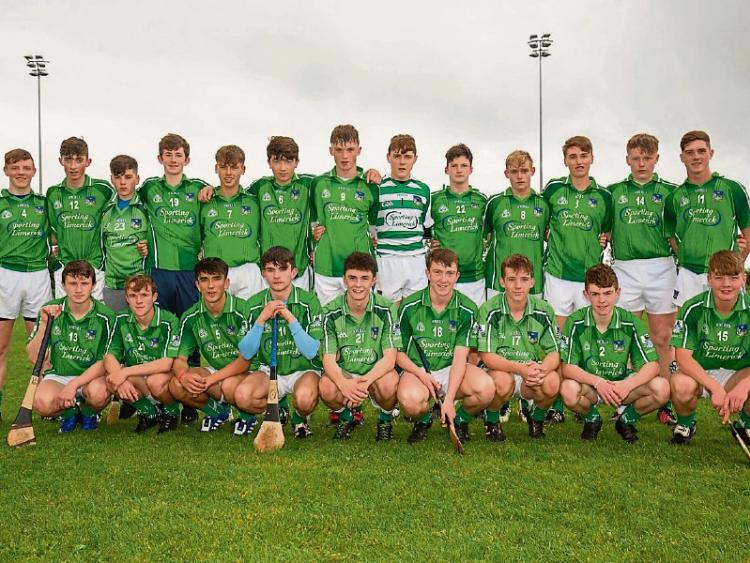 While there was no championship silverware, the U-15 A team did win their plate final.

For the second successive year Cork won the top grade competitions at U-14, U-15 and U-16 level.

Limerick U-16 first squad hurlers had three matches at Silvermines in the Arrabawn in Tipperary on Saturday last and a shield final in Nenagh.

An unlucky three point defeat to Kilkenny after a poor start was the opening encounter summation but the grit determination and no little skill shown was immense. Inspired by the excellence of Ryan Tobin and Jack Ryan at centre field whose work rate combined with a phenomenal skill level was awesome all day. The physical class and hurling ability of Sean O’Leary upset the cats and he really did Dromin-Athlacca proud. Brian O’Grady was superb at wing back and his first half point was superb in its execution. Chris Berkery worked selflessly all day and he really was efficiency and class personified. Dylan O’Shea and Sean O’Connor were a constant thorn in the cats side and their three points between a reminder of this.

However the ball in to the deadly duo dried up and the cats capitalised in a few errors to run out winners by three.

The Wexford game was a must win affair and Limerick got at it from the start. Josh Considine moved to 6 and with his brand of outstanding athleticism he powered into the game. Mark Daly was imperious at full back and playing through the pain barrier his effective old style method of defending lifted his teammates. Paudie O’Connor and Jack Sheehan hurled with serious aggression on the wings and they launched beautiful angled ball in to their forwards. A Sheehan delivery laid off by Dylan O’Shea led to the industrious artist Adam Butler to finish wonderfully. Mark McCarthy really led the charge with such industry and class and he kept the scoreboard ticking. A 3 point win but it was so close when a massive save from the outstanding Daithi Heffernan who played through the pain barrier secured the win.

On to Waterford and a winner takes all battle ensued. An All-Ireland semi-final position up for grabs. Limerick started slowly and went in at the break three points down. Jack Sheehan, Jack Ryan and James O’Brien were the men who kept the ship afloat. Two minutes in to the second half Waterford goaled after two brilliant saves from the excellent custodian Louis Dee to leave six between the sides. Cometh the hour cometh the man and following a huge Josh Considine delivery, James O’Brien fielded superbly shortened the grip and finished brilliantly. A quality strike showing great leadership. Frank Costelloe won some breaking ball and with some fabulous deliveries he thundered into the game. Sean O’Connor and Dylan O’Shea’s marvellous points to draw the sides level. Calvin Carroll won a free from the sideline and from 80 yards out pointed with true class. A point from Considine and the nerveless Carroll extended out the lead to three and a famous victory ensued.

Unfortunately injury ruled out Liam Griffin, James Daly, Adam McNamara and Bryan Flynn before the tournament start. A shame as all four worked incredibly hard over their academy careers and have brilliant futures ahead.

Very disappointing it was to lose out on A semi final spot in scoring difference considering Limerick had by far the toughest group. The team as a whole found it very difficult to raise themselves for the last game with Offaly in the shield final. Fatigue, a short turnaround led to a dip in performance. Bravery was never in doubt though and although defeated the boys never let performance levels dip. Jimmy Leslie Madigan with incredible pace and skill and Liam Molyneaux with his raw Knockaderry power and no little skill both displayed excellent defensive acumen and led the charge whilst Adam Carrig was impressive with typical Patrickswell class. James O’Brien caught marvelous ball and his physical prowess was a feature of the tournament. Offaly won by five but the Limerick lads lost nothing In defeat. However it Kevin Bonner who gave some outstanding defensive displays who caught the eye throughout the day. He was incredibly composed and his level of skill in display left the large crowds gushing.

Well done to former great inter-county hurler Brian Finn who led the setup with great leadership, knowledge, charisma and no little class while his coaching team of Liam Cronin, Pat Conlon, Eamon O’Connell and Sean Maher were superb. Their technical hurling coaching expertise certainly paid dividends. Kudos to Mikey Kiely who had the team in peak physical condition whilst Anthony Daly’s coaching influence is beginning to reap rewards. Joe McKenna and Liam Hayes and their structures are really bearing fruit.  Based on the evidence over the weekend the conveyer belt is in pristine working order and with more hard work the future is bright. Denis Carroll and Breda Harnett Breen also deserve massive Credit as their work in assisting player development is noteworthy and vital.

Limerick’s U-15 Hurling first squad played their Munster championship games in Cork at the weekend.

In the first game we lined up against hosts and 2015 All Ireland winners, Cork and it turned out to be a great game of hurling. The first half was close throughout with both sides evenly matched. We trailed by 0-6 to 0-4 at the break but drew level early in the second half. After some outstanding passages of hurling the teams were locked at 0-8 each when Cork were awarded a penalty which they converted leaving it 1-8 to 0-8 entering the final moments. Another goal for Cork in injury time sealed our fate but the performance of the boys was outstanding. Final score Cork 2-8 Limerick 0-8.

In the second game, Limerick played Tipperary and hurled extremely well throughout and matched our highly rated opponents. It  was 0-5 each at the break but we pushed on in the second half to give a tremendous display and were ahead by 1-10 to 0-8 with a brilliantly taken goal from Danny O’Leary. A late Tipp goal made the final scoreline - Limerick 1-10 Tipp 1-9.

We played Clare in the Munster Plate A final and our exertions of the previous two tough games began to show as we trailed by 0-8 to 0-2 at half time. The second half was a joy to watch as we turned in a superb performance to score 1-7 without reply to win the game 1-9 to 0-8.

After the game, the Plate trophy was presented to Padraig Harnett, Limerick captain.

The Limerick U-15 Hurling second squad played their Munster games in Clarecastle.

All Ireland champions and eventual winners Cork were the opposition in the first game and proved too strong for our boys. Despite a good opening first half, Cork pulled away in the second half to win 2-12 to 1-6.

Well done to all the players, their parents and their clubs for a huge effort in representing Limerick U-15 hurling during the year.

The U-14 Tony Forristal squad played their games in Mount Sion Co. Waterford.

First up was Cork and as anticipated it was a tough physical match. There was very little separating both teams the half time score Cork 1-5 Limerick 1-2 with the lead changing many times during the match Limerick were very unfortunate to lose out to Cork by two points in the end Cork 1-8 Limerick 2-3.

Next up was Clare again a very closely contested match where Limerick under the guidance of Ger Sheehy, Ger Downes, Ruairi Walsh displayed true grit and put up a very good performance coming out of top by five points on a score line of Limerick 2-11 to Clare 2-6.

Unfortunately for Limerick with only three teams in the group and Cork winning both of their games Limerick were unable to advance any further. However was very promising to see so little between this group of hurlers and Cork the eventual winners of the day.

The U-14 Sonny Walsh squad played their games in Waterford’s Walsh Park.

The boys played Wexford first who hit the ground running with the half time score Wexford 1-3 to Limerick 0-4. As with many Limerick teams gone before they can never be written off until the last whistle blows. Under the watchful eye Conor Murphy, Garry Murphy and Tommy Quaid Limerick put in a huge performance in the second half with a man of the match performance for the goalie winning by a point on a score line of Limerick 1-5 Wexford 1-6.

Galway were the next opposition with the winner progressing to the Semi-finals. Galway got off to a good start and put Limerick under pressure from the off with the half time score being Galway 1-6 Limerick 1-1 yet again Limerick came out fighting and scored a goal and it looked like they were going to dominate the second however a determined Galway never stopped attacking and ran out winners for a finish.