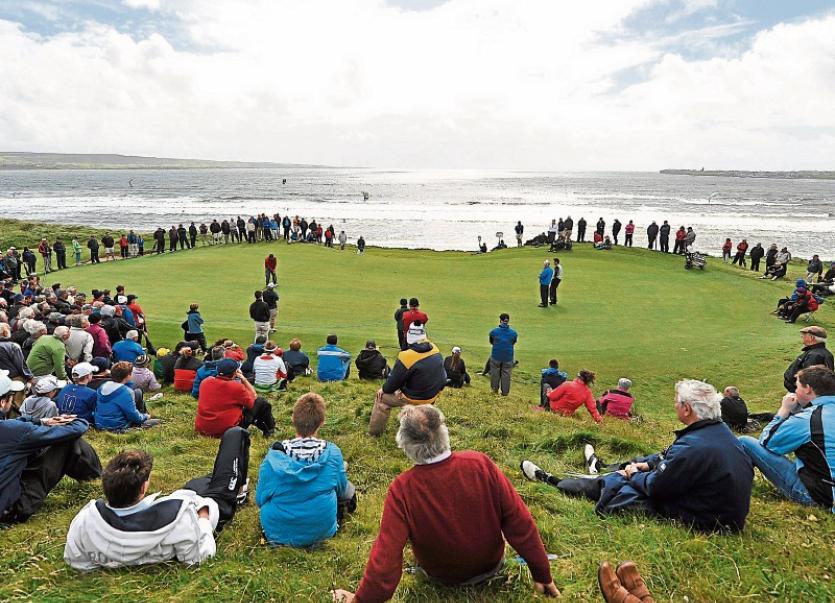 With players struggling in the windy conditions at the AIG Irish Close Qualifying Rounds at Ballyliffin last week, a decision by the Championship Committee to implement "ready golf" lead to a dramatically improved pace of play.

“Ready golf” is a commonly used term, which indicates that players should play when they are ready rather than adhering strictly to the “farthest from the hole plays first” stipulation as per the Rules of Golf.

There is plenty of strong evidence to suggest that playing “ready golf” does improve the pace of play. But, while “ready golf” is encouraged, players must act sensibly to ensure that playing out of turn is not a danger to other players.

In the Close, the first group out finished 15 minutes ahead of the 4.5 hours allotted schedule, which was 25 minutes quicker than the day before when 'Ready Golf' was not in play. The last group in was 5-minutes ahead of the 4.5 hours schedule and 30 minutes quicker than the previous day, which underlines that slow play always gets worse during the course of a day. The first groups out always set the pace!

GUI Championships Manager, Mark Wehrly, explains: "We had challenging conditions and a lot of ball searches and provisional balls put into play. Playing “Ready Golf” is a logical reaction to the fact that, quite often, players will be ready to play before those who would be farthest from the hole in this set of circumstances. We employed 'Ready Golf' as part of a wider strategy that includes moving tees forward and central hole locations – basically giving players every opportunity to play as quickly as possible. We also have five volunteer referees on the golf course at all times to assist players and to enforce our pace of play regulations, and 13 volunteer ball spotters stationed at various holes."

The term “ready golf” is a catchall phrase for a number of actions that separately and collectively can improve pace of play. There is no official definition of the term, but examples of “ready golf” in action are:

- When a player’s ball has gone over the back of a green, any player closer to the hole but chipping from the front of the green should play while the other player is having to walk to their ball and assess their shot

- Marking scores upon immediate arrival at the next tee, except that the first player to tee off marks their card immediately after teeing off

“Ready golf is good when you’re hitting into the greens but if I make a birdie, I like to have the honour at the next tee,” said one competitor. “Pace of play has improved a huge amount this year. Referees are being a lot stricter and players are aware that they have to go around in a decent time.”

Championship veteran Joe Lyons (Galway) played in the first group out on Wednesday morning. “I would always play ready golf at home with my pals,” said former international Joe Lyons. “It should be that way all the time. I generally play like that anyway.”

Robbie Cannon, another experienced campaigner at this level, believes further steps are required: “I think what you need to do, you need to target the slow players. That’s the big problem. There are several players who are always very slow and they need to be targeted and they need to be given shot penalties. You just have to be harsh on people,” said Cannon.

Portmarnock’s Geoff Lenehan, was another who welcomed the move: “It’s definitely a help when conditions get bad, it certainly speeds up play and you don’t have to worry about etiquette. It was good that we were told on the first tee that it was in play, it made it easier and helped the game flow along out there. I enjoy playing fast and I get frustrated when the play slows down,” he added.

Golf is more fun the faster one plays it (within reason.) As the great English golf writer Bernard Darwin noted, “Golf is not a funeral, though both can be very sad affairs.” So let’s be done with dithering and bad etiquette such as 'vacant' talking on the tee and leaving trolleys on the 'wrong' side of greens. If pre-shot preparations took place while playing partners were doing theirs it would help a lot. Shot preparations can be done without distracting others. Being ready to play when it is your turn - then, one or two (maximum) looks and bam!

An average round of golf involves a six-mile walk and in excess of 12,000 steps. Fitness experts recommend 7,000-10,000 steps per day for optimal activeness.