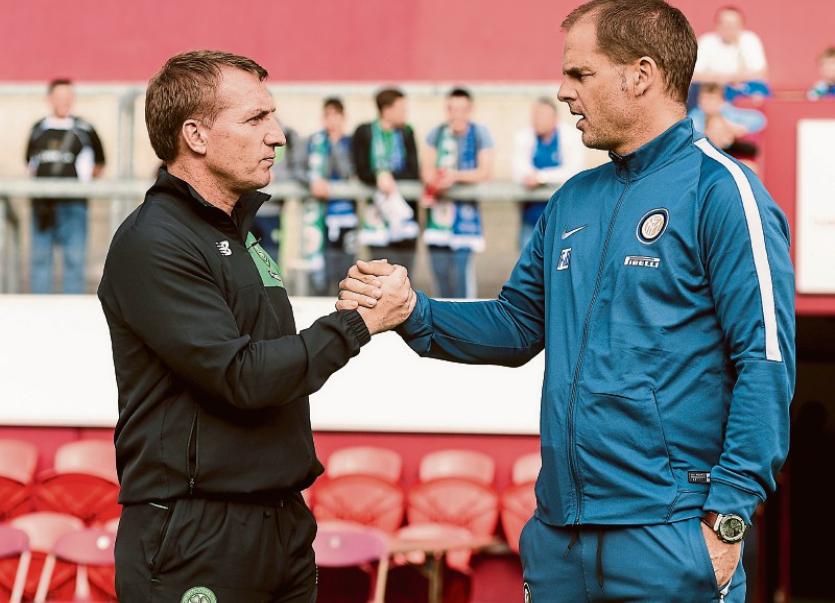 “A success on and off the field” beamed Thomond Park Stadium Manager John Cantwell as the Celtic and Inter Milan players made their way from the home of Munster rugby.

“A very good night for us - it’s not often you have two teams of the stature of Inter Milan and Glasgow Celtic here in Limerick and Thomond Park so it was a success for us on and off the pitch,” explained Cantwell.

”The exposure is very positive and we can’t get enough of that. Brendan Rodgers and Frank de Boer the two managers both spoke very highly of the pitch and stadium and said it was world class and that’s what you want to hear,” he reported.

“It was on Sky Sports and will be all over the papers and media and that’s all great for Limerick and Thomond Park. Everything went like clockwork, everything that we wanted to happen, happened to the standard that international clubs that are used to. That’s the level we have reached and all we want is more events for Limerick and for Thomond Park, whether is is soccer, rugby or any other sport that we can facilitate,” he outlined.

But the stadium manager is well aware that opportunities are rare.

”It’s a very competitive world - what we find is that we are competing with the Dublin venues for everything. There are world class venues in Dublin and they have two thirds of the population and are the capital city and have the Aviva and Croke Park and there is a contract there that the Aviva gets most of the soccer and rugby matches into the stadium. We just happen to have another world class stadium down the road in Limerick but it’s not the capital city and we don’t have a contract with the FAI or IRFU to host games. But what we can do is build on events like tonight and see if we can get more of this - the Council and all of the stakeholders in Limerick are all with us and working as a team to get not only sports events but concerts,” explained Cantwell.

“Sometimes people don’t want to go to an 80,000 attended event, maybe 30,000-40,000 is much more enjoyable as an event. Especially a concert because you don’t need binoculars basically and that's what we can deliver and we have a management, an operational staff and facility that is second to none,” said Cantwell.

”We would rent the stadium but we would run the match as well and it’s great that they would trust us to do that - that’s both the teams and the FAI. When we rent the venue we also sell the match operating cost to them and we do that with our very capable team. We run very big events here outside of soccer with Munster rugby and internationals so we are well capable.”

Saturday saw just under 13,000 through the turnstiles.

”Our agreement wasn’t linked to tickets sales and we weren’t responsible for any marketing or promotion of the game,” said the stadium manager.

”It didn’t go on sale until after the Euros so there was basically four weeks to sell it and it was on the back of Celtic playing Barcelona in the Aviva a few weeks ago. There were a number of factors that mean is didn’t reach something like 20,000 which we would all have love to have but at teh end of the day we had nearly 13,000 for a friendly is pretty positive and I know the organisers and the FAI were happy with that figure.”

He added: “We would rather be involved in the promotion than leaving it up to other people and I am sure we could have added a good few more thousand if we were involved but that wasn’t part of agreement - we rented the stadium and managed the match”.