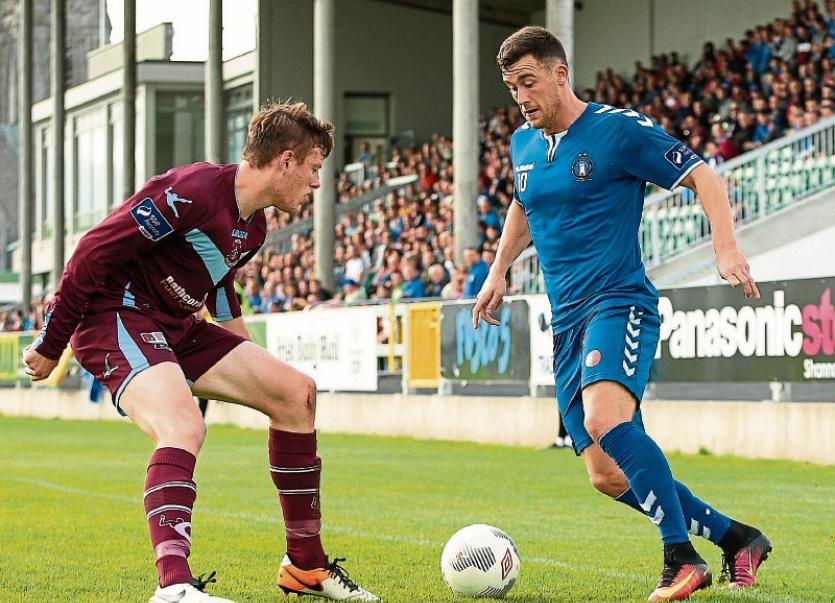 LIMERICK FC MAINTAINED their unbeaten run in the most dramatic fashion possible on Friday night - coming from 3-1 down with ten minutes to go to snatch a point in United Park.

In a game where Drogheda were by far the better side, Martin Russell's men showed resolve to maintain their impressive streak, thanks to a last gasp Aaron Greene header.

Limerick made three changes from Monday night's outing in Derry. Chris Mulhall was rested for his efforts while youngster Paudie O'Connor and Sean Russell were also afforded time off from first team duties. Lee-J Lynch and Tony Whitehead came in, while John O'Flynn started only his sixth league game of the season.

After a run of four consecutive clean sheets, Limerick conceded cheaply inside ten minutes. Too casual at the back, Drogs captain Sean Brennan intercepted a pass just thirty yards from goal and rushed through - closing in on Freddy Hall. Giving the Blues' stopper the eyes, Brennan rolled calmly into the far corner to open the scoring.

Limerick threatened in the early stages of the second half through John O'Flynn. The FIrst Division's top scorer made a clever run to the back post. His effort was goalbound but Kevin Farragher got back well to clear off the line.

The unthinkable occurred after 59 minutes - Drogs doubled their lead through explosive winger Gareth McCaffrey. Marc Griffin tiptoed his way along the byline down Limerick's right side before squaring for an unmarked McCaffrey to power home.

Two minutes later, the Blues were back in it. Lee-J Lynch smashed an effort off the post with the outside of his boot, but Paul O'Conor was on hand to convert from close range despite angered protests from the United players. They may have bee justified - O'Conor looked well offside.

The hosts wouldn't have to wait long to regain full control though. Exactly midway through the second half, Marc Griffin was played through on goal and he finished high - out of Hall's reach.

Limerick gave themselves a lifeline with ten minutes to go - Chris Mulhall broke down the right before pulling the ball back to Shane Duggan who fired a low effort in off the post.

Just as it seemed as though the record was slipping away, Aaron Greene powered a header over McGuinness after a brlliant delivery from Sean Russell with the clock expired.