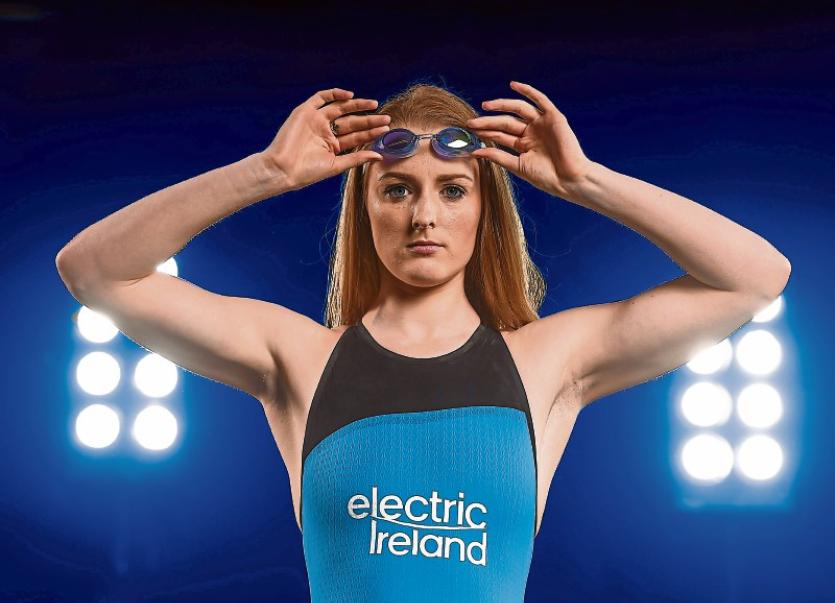 “Dreams do come true. 12 years ago I sat on front of the TV and vowed that I would go to the Olympics. There have been a lot of ups and downs on my journey.

“Many, many tears spilled, but also many laughs had. I am so grateful to everyone that has supported me on this journey.” – Fiona Doyle

At tea time on Sunday, Limerick swimmer Fiona Doyle will head to the starting blocks for the heats of the 100m breaststroke at the Olympic Aquatics Stadium in Barra da Tijuca, Rio de Janeiro (from 5.56pm Irish time)

A sportswoman’s dream - 12 years in the making - realised at the ‘Greatest Show on Earth.’

Every four years, 10,000 of the world’s finest athlete’s compete at the Olympic Games. Just 900 are swimmers and of that total, 450 are women. Doyle is in exalted and privileged company.

Doyle will also compete in the heats of the 200m breaststroke on Wednesday next, August 10.

Doyle was born into a family steeped in the sport of swimming. It was while watching the 2004 Games from Athens in her family living room that the six times Irish record holder set her sights on competing in the biggest sports event in the world.

Doyle’s has come a long way in a short time. No surprise then that she nominated ‘Pain is Temporary - Pride Lasts Forever’ as her Inspirational Quote’ on her Swim Ireland homepage profile.

She told the Limerick Leader: “When I was attending Crescent College Comprehensive, I was training four mornings a week, up at 4.30am and heading to the pool.

“Then it was a case of going straight from the pool to school and then back to the pool again after school had finished. Then you fitted in study.

“We were training five evenings a week. It was 28 hours in all - a bit mental.

“But that is what we needed to do and we were happy enough to do it. We had a fantastic group there at the time. It didn’t really seem like sacrifices to us.

“If that means cutting back on the number of times I go out or choose swimming over going out, then that is what I have to do. I only have such a short period of time to swim. Now is the time to do it.”

Last October, Doyle - who recently completed a degree in Kinesiology from Canada’s University of Calgary - had her Olympic preparation seriously disrupted due to an unfortunate car accident.

“I was driving and had the right of way, but somebody didn't stop at a ‘Stop’ sign. It was dark and by the time I saw them it was too late, so I ended up colliding with her.

“I sustained a concussion from that which meant that it took until the end of November until I got the all-clear to get back to all training. Up until that point I could do an hour of training each day.

“It was a tough six weeks afterwards, both physically and mentally. It is only since the end of December that I could pick up and get back to where I was before the accident.

“Fortunately, training had been going phenomenal up until the accident which meant I was two months ahead of where I was the year previous.

“Training wise, training has been back to normal for the past couple of months.

“It is more mentally it takes it out of you a bit, it is hard to mentally to get around from that, but thankfully I am no longer feeling the effects from it and the Europeans have been quite successful.”

So how excited is the Limerick woman to be finally competing at the Olympics after the disappointment of missing out on London four years ago?

“I am so excited to compete at the Games but I am trying to keep a level head about it all.

“A lot of athletes tend to make the mistake of making the Games seem like a lot more than they are, and end up not performing due to being stressed by the enormity of it all.

“I am trying to stay focused and pretend the Games are just like any other big meet that I have gone to as I wish to do well. Honestly, I am trying to take things one day at a time, and stay in the present.

“It would be naive of me to believe I won't be nervous (on Sunday). However, I know when I stand on the blocks it will be good nerves. I will be confident, and excited.

“I am a very competitive person, so I have high expectations for the Games. However, it all starts with making a semi-final.

“Once I am out of the heats, it is anyones game and I hope to prove to everyone that I am a world class athlete, and do everyone proud.

“I think there is definitely a lot more in me. I definitely have enough to compete at the top level with the other girls, even do better than a lot of them.

“I have high expectations for myself for the Olympics. I definitely expect a second swim at the very least.”

Doyle is confident all necessary precautions will be taken to ensure Olympic athletes are not at risk of contacting the Zika virus, transmitted by mosquito bites, which appeared in Brazil two years ago.

“​I am aware of the concerns but I am confident that the village will be well taken care of. They will be misting the village so there will be a reduction of mosquitoes there. We have all been given information on the virus too.

“We will be well equipped with bug spray. As an athlete, the Zika virus is the least of my worries in terms of the mosquito borne virus' that you can catch in Rio so I will be taken all the precautions I can not to catch anything.”

Doyle won’t lack for support in Rio, although tickets for her actual competitions are extremely difficult to get.

“​I have family coming out. My parents, two brothers, my aunt, and my grandad are all coming out to watch me, as well as some very close friends. They are super excited.

“However, tickets are an absolute nightmare to get. We are only issued with one ticket from the Olympic Council of Ireland, and that is just not enough.

“Hopefully something will come up.”

So what’s in store for Doyle beyond the Olympics.

“​I am not 100% sure what I will be doing in terms of swimming after Rio. I have qualified for the World Short Course Championships in December which will be held in Windsor, Canada.

“However, my goal at the moment is Rio so I am just trying to stay focused on that as much as possible.”