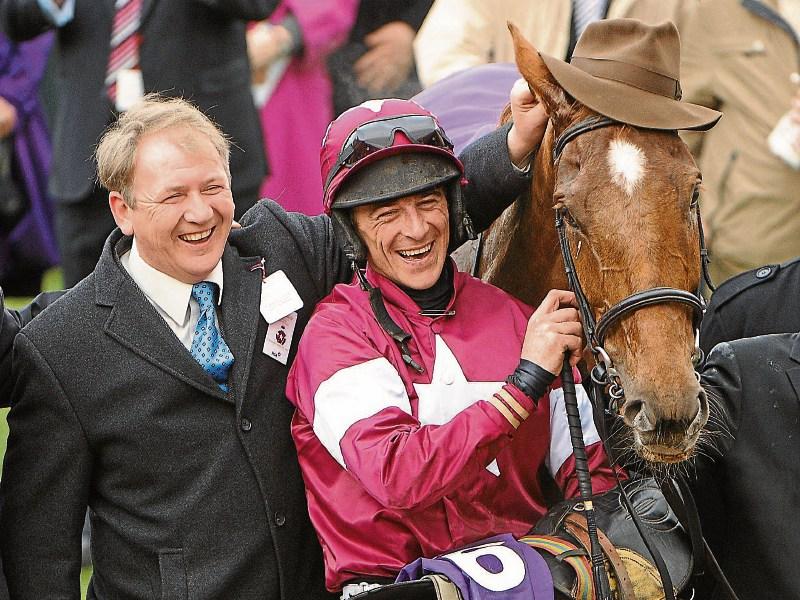 CO Limerick trainer Charles Byrnes was the toast of punters at Roscommon on Tuesday night after teaming up with jockey Davy Russell to land a substantial gamble with three heavily backed winners.

Bookmakers were left reeling as Ballingarry-based Byrnes recorded his hat-trick of wins with horses that had been heavily backed through the day.

A spokesman for Paddy Power bookmaker said they had faced a pay out ‘well into six figures’ between the three winners.

War Anthem got the ball rolling in the two mile maiden hurdle. Available at 16/1 in early trading, the winner was backed into 6/1 and justified that support when scoring by three lengths over 40-1 outsider William B.

Byrnes and Russell completed a double when Mr Smith, available at 12/1 in the morning, justified enormous support to win the JF Hanley Handicap Hurdle at odds of 7/4.

With liabilities building up, it was no surprise to see Top of the Town’s price tumble for the Class Grass Handicap Hurdle. As big as 14/1 in the morning, Top of the Town was heavily supported by punters and duly won the contest by five lengths. The winner was returned the 5/4 favourite.

Afterwards Byrnes told reporters: "After Galway we needed it. I did my brains in at Galway with Sea Light and Crystal Pearl.

“That's my first treble. It's just the way it happened. I wouldn't say I planned it.

“I had a bunch of horses come into form and I put them in together. It was the last couple of weeks I was able to put it together. Long-term it would be impossible to plan.”