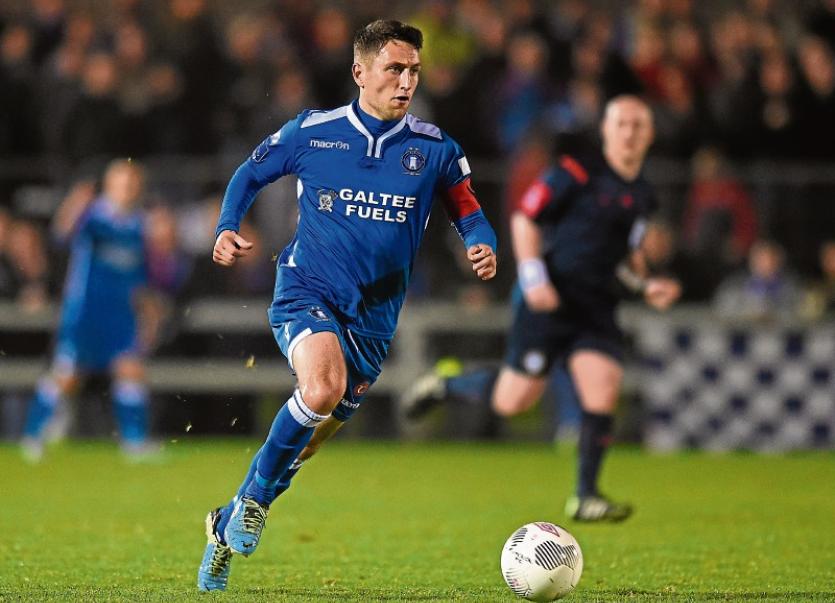 FIRST Division highflyers Limerick FC have been boosted on their march to automatic promotion by the return to fitness of club captain Shane Duggan.

Midfield general Duggan returned to action after a 10-week injury break during the second half of Limerick FC’s routine 2-0 league win over Cobh Ramblers at the Markets Field on Saturday.

A crowd of almost 2,000 turned out to watch Martin Russell’s side restore their gaping 19-point lead at the top of the First Division.

Afterwards a relieved Duggan said: “It’s great to be back. I had been out injured over 10 weeks.

“It was actually in the away match against Cobh that I picked up the injury.

“I took a shot on goal and ripped my quad muscle. I had a tear there. The recovery took a bit longer than I expected. I came back training a bit too early and had a bit of a setback again.

“But it is fully repaired now and I am feeling good.

“It is hard to watch the lads playing when you are injured. I prefer to be on the pitch.

“We picked up good results when I was out, so I am happy to be back playing now.

“Cobh are a tough team to play against. We knew they were going to be well organised coming down and they are doing well in the league as well.

“I think we probably took our foot off the pedal a bit too much in the second half. Luckily enough we got the goals in the first half and overall you would have to be happy with tonight.

“I did think we created enough chances to score a few more goals. Fair play to Cobh, they kept going and made things hard for us in the second half. It was good to keep a clean sheet.

“We don’t want to slip up now. We have been so long unbeaten. We want to keep it going. I think it is in us to go the whole season unbeaten.

“We will be trying our best to achieve it.”

Meanwhile, Limerickman and captain Adrian Power was the hero as Ireland claimed Plate success at the Homeless World Cup in Glasgow.

Power slotted a crucial spot-kick in the penalty shoot-out to help Ireland edge out Egypt after the sides had finished deadlocked at 4-4. Some 64 teams took part in the competition.