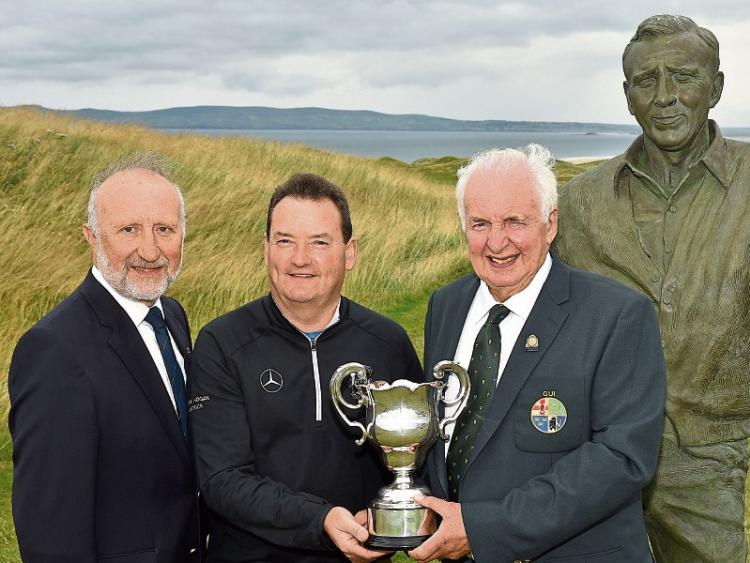 What an exciting week it has been for Limerick golf. First of all, we were able to bask in the reflected glory of a wonderful win by Limerick Golf Club's Ciaran Vaughan in the Connacht Boys U-18 Open Championship at Galway.

Ciaran finished first in a very strong field representing the best underage golfers from all four provinces. Rounds of 70, 71 and 74 were two strokes clear of the chasing pack. As soon as Ciaran hit the front early in round two, he doggedly stayed there and was never headed.

He is the first Limerick boy to win a provincial boy's championship since his cousin Cian McNamara won several of them in the early 2000s. Ciaran's victory came via turning a weakness into strength. A good ball striker from an early age, he has now developed the mental toughness to exploit it - a lethal, winning combination.

Secondly, just a few days past his 50th birthday, Castletroy's Eamonn Haugh carded a final round of 73 on Friday to add to the 76, 74 he recorded on Wednesday and Thursday to win the re-vamped Irish Seniors Close (for over-50s) by two shots at a tough and windy Tralee Golf Club.

Trailing by one-stroke teeing off in the final round, Haugh, with fire raging in his belly and smarting over his surprise omission from the Castletroy Senior Cup team that won through from the North Munster Area, made two early birdies to grab the lead heading into the final nine holes in the 54-hole event.

Haugh fought like a tiger to make two, gutsy, journeyman pars at the 16th and 17th to maintain his slim advantage and secure the Irish Seniors Close title at the first attempt. Being a National champion is no trifling matter and it reflects well on Limerick golf in general.

Thirdly, the pro-am at Limerick Golf Club on Thursday and Friday was a resounding success in every respect.

In an 'ask not what your Golf Club can do for you but what you can do for your Golf Club' gesture, when Frank 'Apple' O'Mahony was elected captain for 2016, he resolved to organize a major pro-am competition as the central part of the club's 125th anniversary celebrations.

The keys to his outstanding success were to secure a top sponsor and the full support of the IPGA. Frank's reward was not only a tidy profit for the GC but the atmosphere of camaraderie, fun and sense of achievement felt around Limerick's most famous and oldest golf club was a deserved tonic for all concerned on the course and off it during the two days of the competition.

The sponsor Norman Costello, Regional Manager of New Ireland Assurance, is entitled to be proud of his company's unique history. Founded by a group of prisoners brought to England after the 1916 Rising, they resolved to form an independent, wholly owned, Irish Insurance Company as soon as they were released.

Today, the company still enjoys an all-Irish ownership and is the only fully Irish owned company in the life assurance, pensions and individual and corporate investment business with offices and agents located all around the country. That not one of them was closed down during the economic crash is quite an amazing achievement.

Although, Limerick GC is recognized as a not an overly punishing, 'member's course' it is subtle and tight; proper placement off the tee is essential to allow golfers to attack' the pins.

Relatively short by modern standards, Ballyclough, as it is affectionately known, yields up low scores reluctantly to scratch golfers even when the conditions are perfect.

Former Irish international, Richard Kilpatrick from Banbridge followed up a steady 70 on Thursday by 'catching fire' mid-round on Friday with a run of five successive birdies between the seventh and eleventh, which laid the basis for carding a second round 66 and an 8-under par winning total, one shot ahead of Old Conna’s, Neil O’Briain.

O'Briain had scored an eagle on the fourth thanks to huge drive and an almost unprecedented 9-iron second shot to within six feet, which was quite a thrill for his amateur partners to witness. Michael McDermott (Pure Golf Leopardstown) returned the best score of the two days, 65 on Thursday but stumbled to a 73 on Friday, finishing in a tie for third alongside Greenore’s Robert Giles on six under par.

Cork's Padraig Dooley (Drive Golf Performance) swept to victory in the team event and picked up a 'handy' €500 by leading his 'red hot' amateur partners to an incredible two-day total of 197 points.