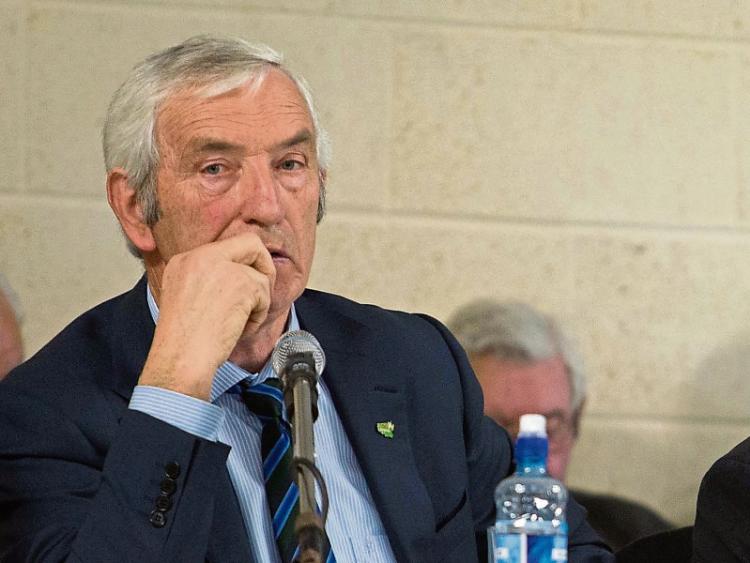 OLIVER MANN held an A4 sheet of white paper aloft after 35-minutes of Limerick hurling debate.

“This isn’t meant to be smart or flippant or anything but that’s the management team of 2017 - a blank sheet,” outlined the Limerick GAA chairman.

The chairman told the meeting of club delegates in Clauighaun that a new ‘Management Selection Committee’ was to be put in place and would be put before the August meeting for approval.

At this juncture this new committee will begin the search for TJ Ryan’s successor.

“First of all we are going to have a review with TJ, not only for 2016 but 2014 and 2015 because over that time he must have built up a huge bank of information and knowledge, which we anticipate would be of benefit to us as a county going forward,” said Mann.

“We also propose to meet with the players to discuss not personnel or management, but to discuss structures that are there and how they think they can be improved and get their take on where we are and what we need to progress forward.”

“I would like to pay tribute to TJ for his last three years and the amount of time and effort he put into managing the Limerick senior hurling team would have to be seen to be believed,” said Oliver Mann, who explained that in the past eight months between training, meetings and other requirements, out of 240 days, a rough count would be in excess of 200-210 days that TJ Ryan, his players or backroom team would have met or been in contact.

“The meeting we had with him was most cordial and I would like to emphasis that - it was most, most cordial, which is rare and that’s why I emphasis it,” said Mann of TJ Ryan’s departure on Monday.

There was a microphone malfunction at the outset of the meeting, leading the chairman to urge all speakers “to be loud and clear”.

After his initial outline of the process to appoint the new manager, he offered the club representatives an opportunity to speak.

Camogue Rovers delegate Pat Murnane - who proposed the recommendation of a three-year deal for TJ Ryan in August 2014 - recalled reservations he had about the Garryspillane man’s “lack of experience”. “I hope we finish up with a manager who has the experience of winning and vast experience on the sideline,” said Murnane of the new appointment.

Claughaun’s John O’Brien called for an “all-in-the-one package” proposal to be put before the club’s for ratification, unlike previous management teams where the manager, selectors and coach were often rubber-stamped at different meetings. He also asked for the “terms of reference” of the new ‘Management Selection Committee’ to be finalised at the next meeting.

“I think it’s very important that whoever we get we implement the structures they want in terms of coaches, etc or do we still want to have a say in who selectors might be or are we prepared to let a manager come in and make a complete decision,” said O’Brien.

The chairman responded: “In an ideal world that would be the case but there are times when your manager is secured and he goes or someone on his behalf goes about sourcing selectors and the word gets out that Johnny is the new manager and that’s why sometimes we bring the manager’s name in an effort to inform the clubs first”.

“We should stick to someone within Limerick - we do have a lot of people within the county and I can’t understand why we would bring three fellas from Cork over the last couple of years and just look at the Cork senior hurling team last weekend,” said Quilligan.

“We need to get the best team on the field so the supporters come back. I think we should put an ad in the paper …. 'Coach wanted, sweeper not allowed'.”

“It’s the style of play,” said Oliver Mann. “There is a sweeper here, a sweeper there, a sweeper everywhere,” commented the chairman. Bruff’s Ray Hourigan pointed out that “the coach is just as important as a manager”, while Ahane’s Pat Minihan suggested “maybe someone from the out-going backroom team would be considered to bring their knowledge and experience forward”.