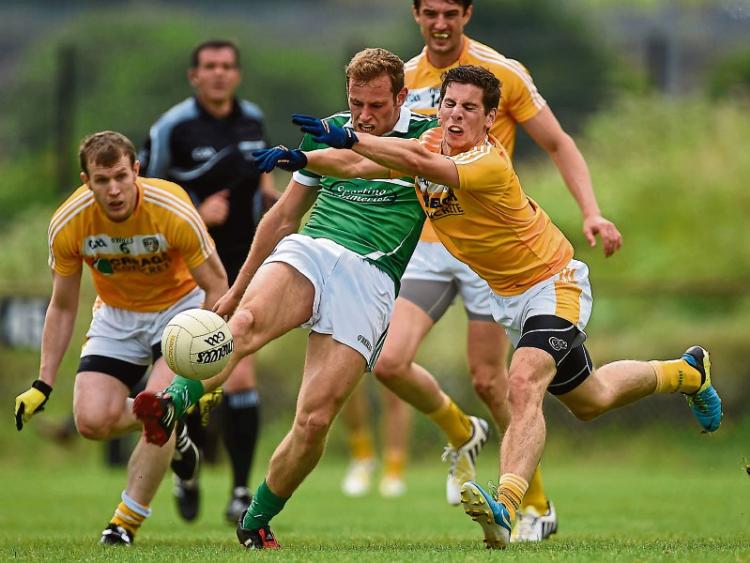 TWO early goals inspired the Limerick senior footballers to a Belfast victory this Saturday afternoon in the All Ireland SFC Qualifiers.

The final score in Corrigan Park was Limerick 2-6 Antrim 0-9.

The win moves John Brudair’s Limerick into a July 9 round two qualifier against Mayo, Cork, Donegal/Monaghan or Westmeath/Kildare – the draw takes place at 8.30am on Monday morning on RTE radio one.

Limerick arrived in Belfast as 5/2 outsiders and without a competitive win since April 2015.

Despite the departure abroad of three first choice players since the Munster SFC defeat to Clare, the 12 game run without a win was to come to a surprise end in St Johns GAA club grounds.

Limerick played against the strong breeze in the first half but led 2-2 to 0-6 at half time.

Both goals came in the opening eight minutes and indeed Limerick were to go the final 20-minutes of the half without a score.

But it was a massive defensive display from Limerick in the first half to restrict the breeze assisted Antrim to just six scores.

The home side did have the opening two scores inside 90-seconds before Limerick found their two goals, after a Sean McSweeney free had opened the visitors account.

The first goal came in the sixth minute when Ian Ryan finished to the net after gathering a Seanie Buckley diagonal delivery.

Within two minutes Limerick had another goal.

This time it was Darragh Treacy that won ball in the full back line and when fouled Sean McSweeney dispatched the resulting penalty low to the keeper’s left.

Antrim responded with two points but a fine Ian Ryan point from play had it 2-2 to 0-4 on 17-minutes.

But there wasn’t to be another Limerick score in the half but the defence stood firm.

Indeed Ian Ryan almost had a third Limerick goal in the 25th minute but for a fine Chris Kerr saved.

Limerick had the breeze in the second half but again it was a strong defensive display.

Limerick were to score just four times in the half but Antrim never got the goal they needed with three superb Donal O’Sullivan saves pivotal.

Stephen Cahill and Ian Ryan (free) moved Limerick 2-4 to 0-6 ahead before Antrim scored 23-minutes into the second half.