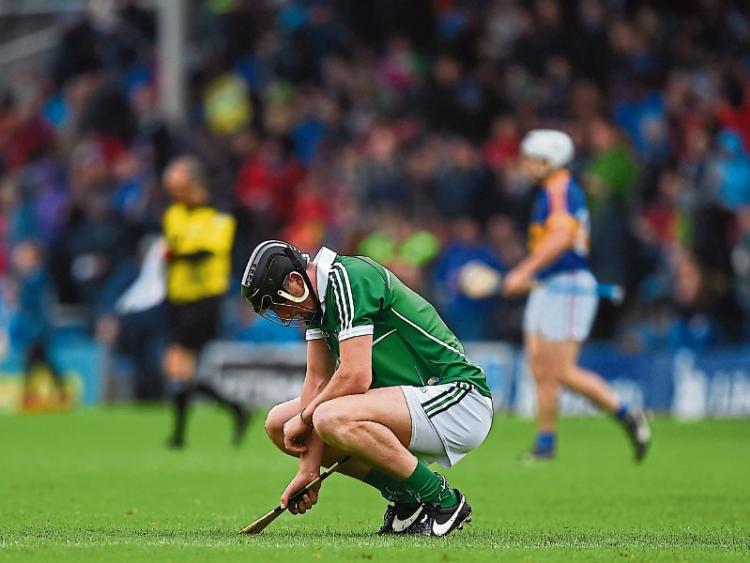 We had hoped and expected more but in reality I would think few Limerick supporters would have been surprised with the way Limerick limped out of the Munster championship last Sunday in Thurles.

This was yet again a very poor display by Limerick and the final scoreline does not reflect the difference between the teams. Limerick got a lucky break when Tipperary were reduced to 14 men and we can only imagine the outcome had they kept all their players on the field. It was clear that Tipperary were the better team by a fair degree. They played with a steely composure that sadly Limerick could not match.

To win major games you need to hold your own in key positions but in this regard Tipperary were in control in most areas. The spine of the Limerick team was weak and they struggled to compete with a far more determined Tipperary outfit. Limerick had problems in all parts of the pitch but the defence was unable to cope. Most of the backs were well beaten but once the ball went into the full backline they looked shaky and expressed no confidence in addressing the ball.

Limerick have made no progress over the last three years and once more that was proven in Thurles last Sunday. Their hurling was shocking and it looked to me that this team are no longer playing for the manager and his management team. Limerick were beaten both inside and outside the lines and anyone that tries to put a different spin on it are living in fairy land.

The Limerick players appeared not to have the stomach for the contest. They were not prepared to go into the trenches. A few things fell in Limericks favour but they never really took advantage of them. For almost an hour we had an extra man but in the second half it looked like Tipperary were a man to the good. Limerick had no plan but what was most disappointing was that very little effort was made by the management to rectify as the game proceeded.

It was a big call to play Dan Morrissey at full back. He was under huge pressure and is not suited to this position. It was a really bad call by the manager. Why was Richie McCarthy not played? Was it because he failed to turn up for a challenge game against Waterford in the weeks leading up to the game? Was he the only player who failed to turn up for the game? The defence as a unit were all over the place.

Seamus Callanan tormented Morrissey and the entire Limerick defence. Tom Condon struggled, Gavin O’Mahony was unsure what to do when he became the extra man and when he did get the ball he made little use of it. Seamus Hickey has learned no lessons and continued to head off on his futile runs up field. I don’t think it’s possible to be chairman of the GPA and hold down a place on an inter county team as well. In my view that’s a role for a retired player.

The midfield pair of James Ryan and Paul Browne were blown away by Brendan Maher and Michael Breen. Limerick used nine forwards in the game and their return was well below what’s expected at this level. Shane Dowling’s contribution is mainly from frees and we saw very little from the rest of the players.

Cian Lynch tried hard but faded. Declan Hannon scored two points but overall this was yet again a game to forget for him. Graeme Mulcahy just had no answer to Cathal Barrett. I think most people know that Gearoid Hegarty is not a forward but yet the management played him there. Barry Nash is a young player with a future but he found it hard to cope with the heat in this game. Limerick had only two recognised forwards on the bench and to me the balance was wrong. The performance level of many Limerick players has dropped - why is that?

Those early goals finished Limerick. The backs and Nickie Quaid should have done better. Michael Breen was on fire for Tipperary and he roasted Paul Browne. Despite those goals Limerick were just three points down at half time. I expected them to really go at Tipperary early in the second half but it didn’t happen. They hit some very poor wides whereas Tipperary were composed at all times.

Limerick were rudderless for long stages. It appeared they had given up and just could not match what Tipperary brought to the table. We had hoped it would be different but Limerick brought their league form to Thurles and that was never going to be enough to compete with a Tipperary team well managed and organised by Michael Ryan.

Tipperary emptied their bench with ten minutes to go. Superb points from Noel McGrath, Seamus Callanan and Pauric Maher closed out the game for them. Tom Morrissey had a goal deep in injury time to put a better reflection on the scoreboard but overall Tipperary were miles ahead of Limerick.

How the management left Gavin O’Mahony deep in defence for the second half is beyond me. We only scored two points from play during this period but it showed the lack of confidence in the team and certain players. There are no excuses here. This was another poor display and the management and the players need to take responsibility for it.

A few weeks ago County Secretary Michael O’Riordan told the County Board meeting that having spoken to management and players that, “There was more positives than negatives from the National League.” Most people knew that not to be the case and in fact it was an insult to the hurling people of this county. I have said before until we have honesty we will make no progress.

The senior hurling team has declined over the past three years and from what I witnessed in Thurles last Sunday the long term future of many young players could be damaged. When Michael Ryan took over in Tipperary he made a few calls to players and gave a few weeks to retire. TJ Ryan has not made hard calls and he is now suffering for it. The Limerick public has lost faith and I am hearing now that the management is blaming the players and the players are blaming the management.

It all points to a camp wanting the championship to end. Finally at the end of the game I witnessed some so called Limerick supporters verbally abuse players after the game. It was wrong and in bad taste and I hope I never see it again.