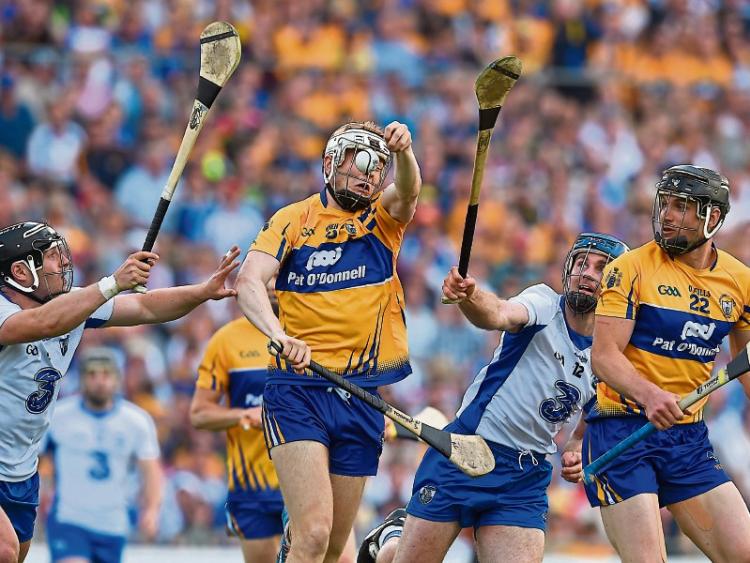 The game of hurling as we know it is in a strange place. Many are trying to come to terms with the systems and structures that some teams have now adopted.

The game of hurling is regarded as one of the greatest field games in the world but a continuation of what we are seeing will do serious damage to a very special game. Hurling has become complicated and will lose its appeal unless someone has the gumption to bring in some measures that will restore the values that has served the game for so long.

I know many great hurling supporters that have stopped going to games. That was evident in Thurles last Sunday when a far smaller crowd than expected turned up. The player with the most skill will suffer greatly in the current game because he is suffocated by the number of bodies around him. I arrived in Thurles early for the Munster semi final between Clare and Waterford. It was clear a small crowd would attend.

There was very little atmosphere around this famous venue and that is not something one would associate with Semple Stadium. This was the third time the counties would meet in the space of a few weeks but long before the league was of concern the championship was the pillar of all their work over the past few months.

The crowd was very disappointing and one leading Munster Council official feared that only around 16,000 would attend. As the throw in approached just over 19,000 had come through the gates. To the Munster Council’s credit they have many packages in place but even that was not good enough to entice supporters. I saw something new in Thurles on Sunday.

Normally the Fourth Official is seated and keeps an eye on subs coming on and off. It was very different in this game. He might as well have been refereeing the game. His main duty was to keep the peace on the line between the Waterford and Clare management teams. It got over-heated on many occasions and from what I saw it took from the game. I asked those in charge would this measure be in place for all championship games.

The answer, “Where we see potential difficulties it will be used.” I would not be surprised if it’s in place for the Limerick v Tipperary game in two weeks time.

TJ Ryan wears his heart on his sleeve and is known to get stuck on the sideline and they might well feel it’s better to have the Fourth Official running the same sort of operation again. To me it was a step too far. Now I will admit the same official was well tested by both sets of management teams and backroom staff. What I witnessed was not in keeping with the sort of respect I have observed over the last 20 years or more. On a few occasions Munster Council stewards approached the dugouts and warned those involved that they would be removed to the stand if they continued with their actions.

At no stage did Waterford look in any real danger in this game. They were composed and when I interviewed Derek McGrath before the game he was in no doubt that his team would win. This is a young Waterford team but I was very impressed by them. The players have their feet on the ground and are working to a plan that McGrath has built and developed over the last couple of years.

I interviewed a number of them after the game and while happy to win they were humble and down to earth. The Waterford dressing room was calm and lads took winning in their stride. They played Limerick two weeks prior to the meeting with Clare and they were on fire. They would have given the Limerick management lots to think about. I wouldn’t be too worried about that result as Waterford were the team nearest to championship and would have wanted to see where they were at. The result showed them they were well on course for the Clare game.

Waterford won all the major battles whereas Clare struggled to contain the big players on the Waterford team, men like Austin Gleeson, Darragh Fives, Kevin Moran and Maurice Shanahan were in sparkling form and totally dominated the contest. Clare were in trouble in many areas but they made it even more difficult when they failed to take the many scoring chances from placed balls.

The quality of play was poor at times and the lack of goals because of the systems used is taking from the game. Both keepers had very little to do other than puck out the ball. Hurling to me is stagnating a bit and if we don’t see some off the cuff hurling it might well follow the same sorry road as football.

Waterford are now back in their second Munster final in a row and their seventh in ten years. Clare on the other hand have only won one championship match since winning the All Ireland in 2013.

Waterford are making serious progress. Look at where they have gone since coming out of Division 1B two years ago. I’m not so sure the system of play they have developed will take them all the way but to their credit they are a very well honed team that work very hard. I think they have the player base to go man to man but expecting change now might be a step too far for them.

The game of hurling best defines Ireland, it’s part of our culture and Irish people carry it with them all over the world. I would hate to think that the game as we know it will disappear.

The ancient art of hurling has survived many challenges and I can only hope that the current style used by some teams will evaporate for the long term good of the game.