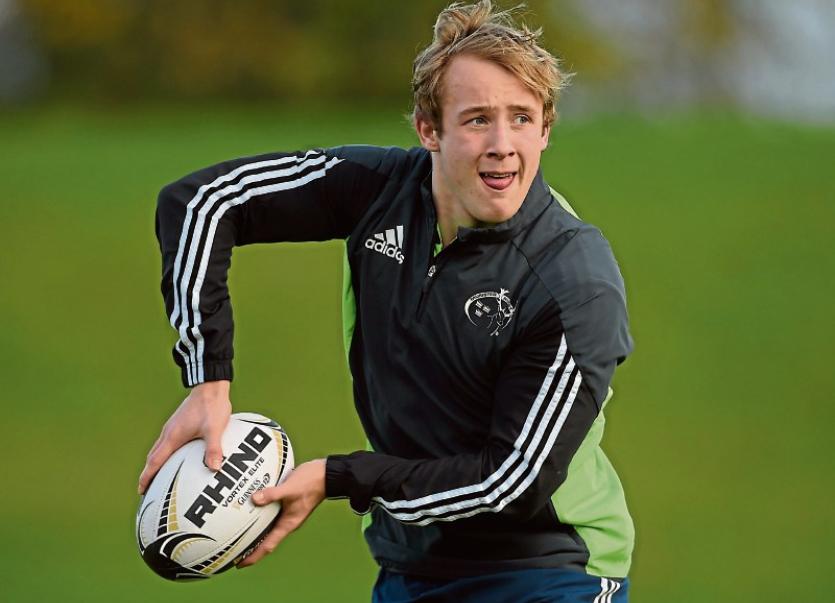 TALENTED out-half Gearoid Lyons is confident his decision to swap Munster for English Championship side Nottingham Rugby next season is ‘definitely the right call’ for him at this stage of his career.

Exciting play-maker Lyons was left frustrated by the lack of gametime he was afforded with Munster’s ‘A’ side this season.

While the 21-year-old did have an offer of a contract from the province for next season, the Young Munster clubman opted instead to take up a contract offer from English Championship side Nottingham.

Munster assistant coach Ian Costello takes up the position of Nottingham head coach this summer and Lyons will be joined at The Bay by Munster back-rowers Shane Buckley and Jordan Coghlan.

Gearoid Lyons said: "I have finished my third year in the Munster Academy. I was offered a contract by Munster for next season, but the opportunity to go to Nottingham came up.

"I weighed up the two options and thought the best thing for me to do was go over there because I felt I would get more game opportunities at Nottingham.

"What I need to push on as a player is to get more gametime. That's what I believe, anyway. That was the biggest factor.

"The Championship play-off games have been on Sky TV for the past few weeks and I have been watching them.

”The standard is not as high as PRO12 or Champions Cup, but it is a step up from playing in the Ulster Bank League with Young Munster, which is what I have been doing for the past two seasons and with Shannon for the year before that.

"That was what I was looking for, a new challenge, because I didn't really see myself, with the position I was in at Munster, getting much of an opportunity again.

"I was disappointed with the lack of opportunities with the 'A' team this season. I didn't see that changing next season with the personnel that was going to be there.

"Going over to Nottingham to play at a higher level than I played at this year was how I saw it. I think it's definitely the right call for me.

"The standard seems very good over there. They are only a step below the Premiership. They are feeders for the Premiership teams, so those clubs will be watching the games. Another opportunity could arise from that.

"Sometimes it's the hard route some players have to take. They don't get it as easy. They might just not get a break, I don't think I got one personally.

"Going over and looking for a new venture is something that could help me in my career. Who knows, in a few years time I could be back in Ireland playing rugby again?

"Obviously Cozzy (Ian Costello) is taking over as head coach. The fact he is involved in bringing myself and two more Munster lads over should help us fit into the squad nicely. It was a massive attraction for me to go over there.

"I hope to head over for a few days in about three weeks. The lads Shane Buckley and Jordan Coghlan are going over before that to find accommodation. We will be living together over there.

“Everyone I have spoken to about Nottingham itself have very positive feedback about it, so I am really looking forward to going over.”

The 2013 Munster Schools Senior Cup winning captain with Crescent College Comprehensive impressed for Young Munster this season in their march to the semi-finals of the Ulster Bank League and final of the Munster Senior Cup.

“Young Munster is going in the right direction. We were in three finals this year, Charity Cup, Junior Cup and Senior Cup, as well as making an AIL semi-final.

“I owe a lot to the club. I learned a lot there. It is really a massively homely club.

“You really have to buy into everything there. It is probably the best club in Limerick for that.

"I am also very grateful for what I learned during my time playing at Crescent College. It was a major stepping stone for me. The likes of Tony Trehy, Conan Doyle, Eugene McGovern, they were great to learn from.”

Lyons, working his way back to fitness after an ankle injury, is also part of the Ireland 7’s mens squad which will be chasing Olympic qualification for Rio de Janeiro in Monaco in June.

He said: "The opportunity to go to the Olympics is a big thing in any sportsman's career.

“Coming from Limerick as a rugby player the chance to compete in the Olympics is not something you could dream about happening.”