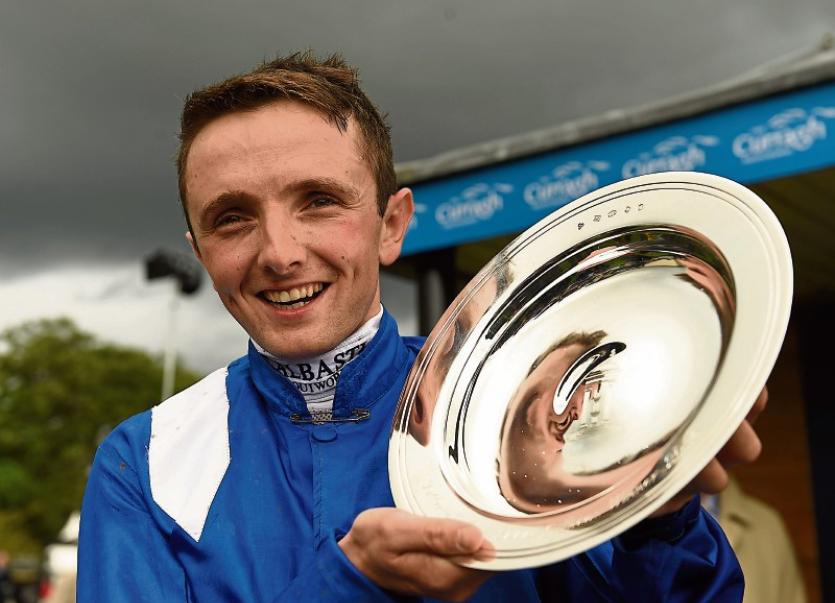 Twenty eight-year-old Hayes, from Shanagolden, claimed his second Irish Classic success when partnering Awtaad to a thrilling victory in the Tattersalls Irish 2,000 Guineas at the Curragh on Saturday.

Awtaad, trained by veteran handler Kevin Prendergast, who was enjoying his first success in the race for 40 years, will now be aimed for a tilt at the prestigious St James’ Palace Stakes on the opening day of next month’s glamorous Royal Ascot  meeting.

Chris Hayes told the Limerick Leader: “We always held Awtaad in high regard, so it was just important that everything went according to plan in the build-up to the race which it did.

“Then it was just left to me on the day to make sure things went as planned.

“Everything went as I would have liked except that I hit the front too soon. It was just the way the race worked out.

“It was unbelievable to win for a few different reasons. The fact it was for the boss (Kevin Prendergast) meant the world to me because he has looked after me since I left Limerick and came up to him.

“He has been very good to me. To be involved in the build-up, riding the horse all the work, watching the horse grow, and the way the boss trained him to perfection it was fairytale stuff.

“These are the races we all want to win and need to win if we are going to advance and step up our game.

“I didn’t celebrate Saturday night because I had six rides the next day, including another Guineas ride for the boss.

“I got out for some dinner with my brother, who lives up here, and my girlfriend on Sunday night. We had a few drinks, but that is as mad as I go anyway. There will be plenty of time to celebrate if he wins in Royal Ascot!”

Hayes, who stands at 5’ 3” tall and whose racing weight is 8st 4lbs, hopes Saturday’s Classic success can propel him to the next level in his profession.

He said: ”When Mick Kinane and Johnny Murtagh retired, Pat Smullen, as I would put it, took over the throne.

“For us to get anywhere close to him we need these kind of horses and need to win to win these races to get the recognition. Pat is the go-to man if there are any spare rides in those big races and rightly so. His record speaks for itself.

“Now is the time we need to be stepping up and winning these races, hopefully, will help to do that.”

Hayes, son of PJ and Mary, is looking forward to partnering Awtaad at Royal Ascot.

“The plan at the minute is the St James’ Palace in Ascot (Tuesday June 14). After that we don’t know.

“I have ridden in Royal Ascot before, but I haven’t ridden a winner there. I rode in the St James’ Palace Stakes before, the year Kingman won it, so I have experience in that class of race.

“To be riding in it on something like him will be different gravy.

“He will have a chance. He won’t start favourite because The Gurkha, of Aidan O’Brien’s, will be favourite, but that won’t bother us.

“Once the horse goes there fit, healthy and happy, we will be fine and I am sure he will put his best put forward.

“I spent last winter in Dubai and five winters in India from ages 19 to 23.

“I was in Dubai for five months from October until March. I loved Dubai, settled in straight away and had a double my first day out there. I rode for a very good trainer and one of the biggest owners out there.

“A lot of good jockeys had the job before me, so I knew I was going to the right place. Thankfully, I rode 20 winners and won the Guineas out there and had a great time. It was a good.”