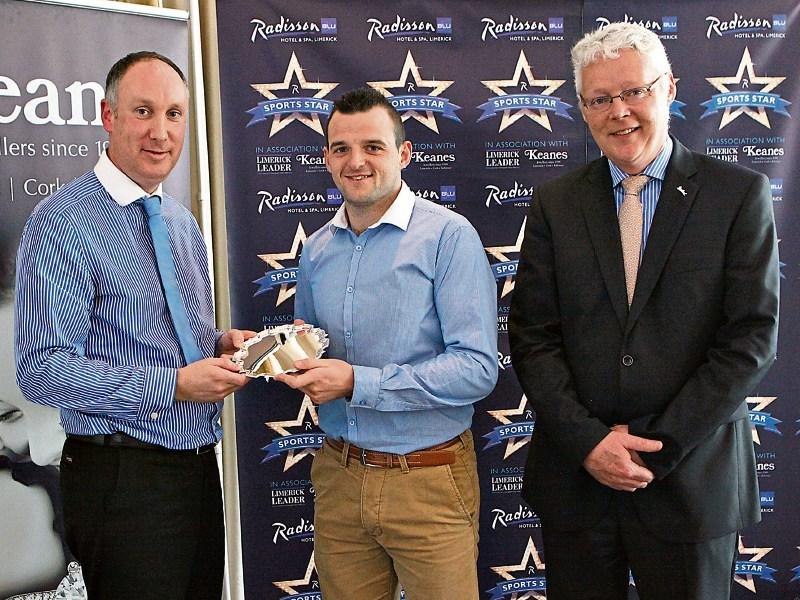 IT’S only the beginning of May and already Alan Dempsey has had quite a 2016.

March 17 will always be a day that Dempsey will remember – the day Na Piarsaigh won Limerick’s first ever All Ireland club SHC title in Croke Park.

This Monday came another milestone in the life of the 23-year-old when he sat the final exam in his studies in LIT. Dempsey studied Marketing.

Just two hours after his final exam, Dempsey was in the Radisson Blu Hotel to collect his Limerick Sports Star award for March.

A Munster U-21 hurling winner with Limerick in 2011, Alan Dempsey revelled in his new midfield role throughout Na Piarsaigh’s journey to claiming Limerick, Munster and national honours.

As the Caherdavin club reached Croke Park he scored 0-15 from play, despite missing three games when he was in the US during the 2015 summer. Then in the final against Antrim’s Ruairi Og Cushendall, Dempsey chipped in with another four points from play.

“It is something that you dream of when you are growing up as kids,” he recalled this Monday afternoon.

“We would have been watching the likes of Portumna and Newtownshandrum winning All Irelands and questioning if we would ever get there – we had never won county not mind Munster titles,” said Alan, who was joined in the starting team by younger brother David.

The brothers dedicated their final win to their late grandfather Paddy Hickey – the former Meelick and Treaty Sarsfields hurler.

”To finally get over the line was very satisfactory to say the least,” recalled Alan.

The champions of Clare, Tipperary, Waterford, and Wexford were beaten on the way to the All Ireland final. In front of just over 30,000 in Croke Park and the watched TG4 audience, Na Piarsiagh blitzed their opponents on March 17.

Dempsey was full of praise for club officials and the management team of Shane O’Neill, Kieran Bermingham, Alan Cunningham and Darragh Droog for ensuring the team were best placed to produce such a sparkling display on the biggest day.

“To be fair to the management they played it down an awful lot – we always said we wanted to go up and play the game and not the occasion. Management kept the carnival stuff away from us and let club personnel look after all of that. We just concentrated on what we were doing to do and that was to play the game to the best of our ability and we knew if we did that it would take a hell of a team to stop us,” he explained.

But the All Ireland celebrations and the Tommy Moore Cup are now firmly to one side. Dempsey accepts his monthly award less than 24 hours after the All Ireland champions were defeated in round one of the Limerick SHC by Kilmallock.

“We have moved on and had to park it for now,” he said.

“Celebrations have stopped for now and we will enjoy it again maybe at the end of the year when things die down again,” said the March award winner.