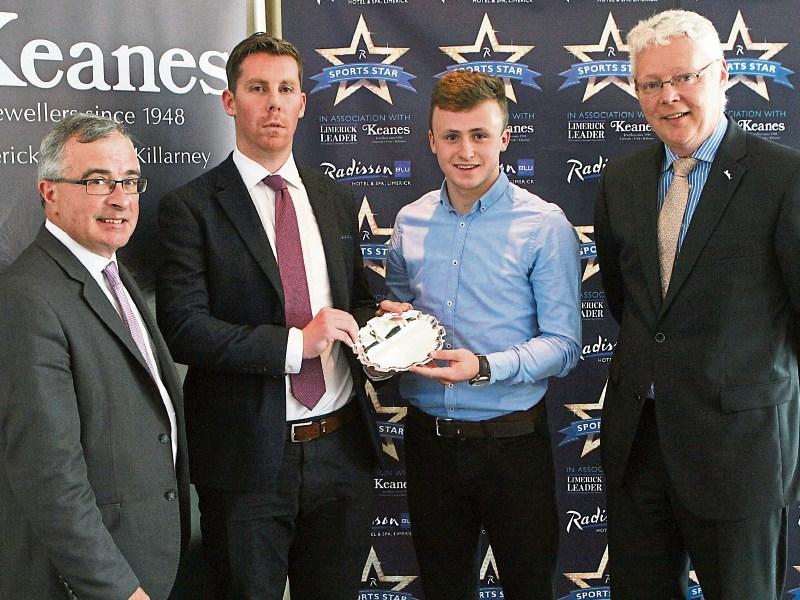 ANTHONY Barrett needs to pause to draw breath as he outlines his hectic schedule.

The Kilmallock man turned 18 last Saturday but such is his sporting prowess that there’s hardly time for celebrations.

Barrett, a son of Sean Barrett and Breda O’Riordan, is the junior award winner for April. A month which saw him play Munster GAA championship on four successive Wednesday evenings and also saw him as a key member of the Limerick District Youths soccer team that narrowly lost the All Ireland Inter-League final.

And success is following Barrett too.

On the soccer fields, All Ireland honours just fell short with Limerick losing the final to Cork. But silverware has come his way with the Kimallock youths team completing the double last Wednesday night and two nights later teenage Barrett was introduced as a sub as the Kilmallock junior side won the O’Halloran Cup title with promotion to the Premier Division in the league already assured.

“It would be four or five nights and even seven and then there might be school stuff during the day as well,” outlined Barrett of his schedule of training and matches.

His soccer is played with his native Kilmallock AFC at present but the former Kennedy Cup captain also had spells with Herbertstown and Mungret.

On the GAA fields he has followed in the footsteps of brothers Liam, Thomas and Sean to play minor football with Limerick. On Thursday he will be one of four dual players in the panel to play Cork in Pairc Ui Rinn and he is full of praise for respective managers Pat Donnelly and Jerry O’Sullivan.

“To be fair they are both accommodating and understanding and are always in contact with eachother about training and matches. If it wasn't for the managers we wouldn’t be able to do it. If I do need to take a break I say it and just go and watch training.”

Interestingly, both GAA managers play Barrett in a roving role from his positions in the full forward line.

“That’s probably my best attribute – I can keep going for as long as is needed,” joked the award winner on Monday in the Radisson Blu Hotel.