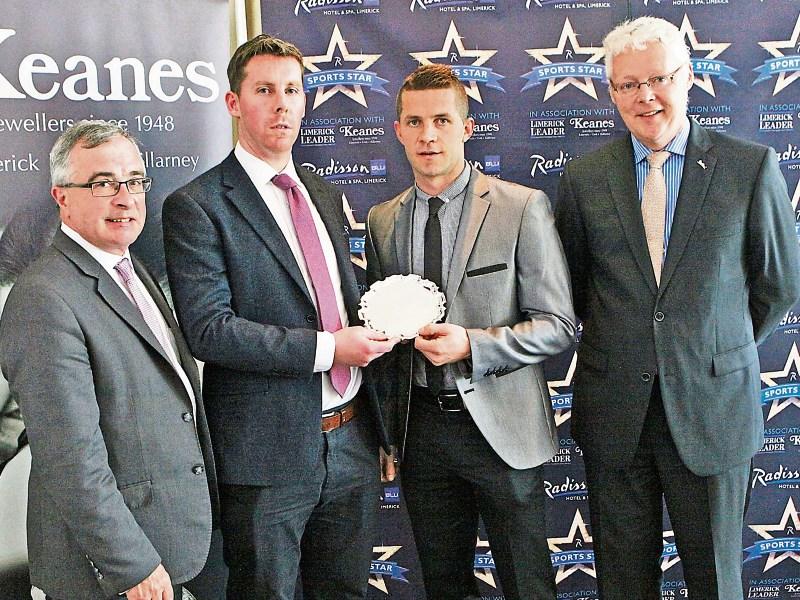 STRIKER John O’Flynn could hardly have hoped to make a bigger impact since joining Limerick FC during the closed season.

Thirty three-year-old O’Flynn has banged in 11 goals for Martin Russell’s high-flying Blues since joining the club from Cork City.

The former Premier Division and FAI Cup medal winner with Cork has proved an astute signing for Limerick and his goal tally earned him the Sports Star Award for April.

“My time at Limerick so far has been fantastic. As a team we are doing well. Individually, accolades come after that from the team doing well. I am delighted.

“It was a big decision to come to Limerick. But as soon as I spoke to Martin (Russell), spoke to Pat (O’Sullivan), they made my mind up then knowing they had kept a lot of the team from last year.

“It is a Premier Division team in the First Division, so I think we are showing that at the minute. It is great to be involved in that, the winning mentality.

“Winning becomes a habit and we are in a good winning habit at the minute.

“That’s why Martin brought me in (to score goals). I have gotten a run in the team, doing well scoring, but this team makes a lot of chances and it is nice to be on the end of them.”

Former Peterborough Utd, Barnet and Exeter City striker O’Flynn insists complacency will not be an issue for the Blues who have built a 12-point lead at the top of the First Division.

O’Flynn said: ”Anyone who has come to the Markets Field or watched us play will know we are definitely not complacent even if we are winning 4-0, we are still going for more goals, trying to kill teams off and be as ruthless as we can.

“I don’t think with the players we have in the team and the squad, I cannot see complacency coming into it at all.

“We are enjoying winning and scoring lots of goals, but we know there are tough games to come. We had a tough game against UCD a few weeks ago, came through that.

“It is always tough to go to Cobh and we got three points there. We are taking it game by game. The manager is keeping our feet on the ground and I don’t think we can become complacent.”

O’Flynn also hopes Limerick can enjoy an extended run in the FAI Cup to go with their fine EA Sports Cup campaign.

“I was involved in the FAI Cup final last year (Cork City v Dundalk) and it is fantastic for the fans.

“It is a totally different feeling to the League. It was one of our goals at the start of the season to go on a Cup run as well as to do well in the league. We are in the EA Sports Cup semi-final and have Bluebell in the FAI Cup.”