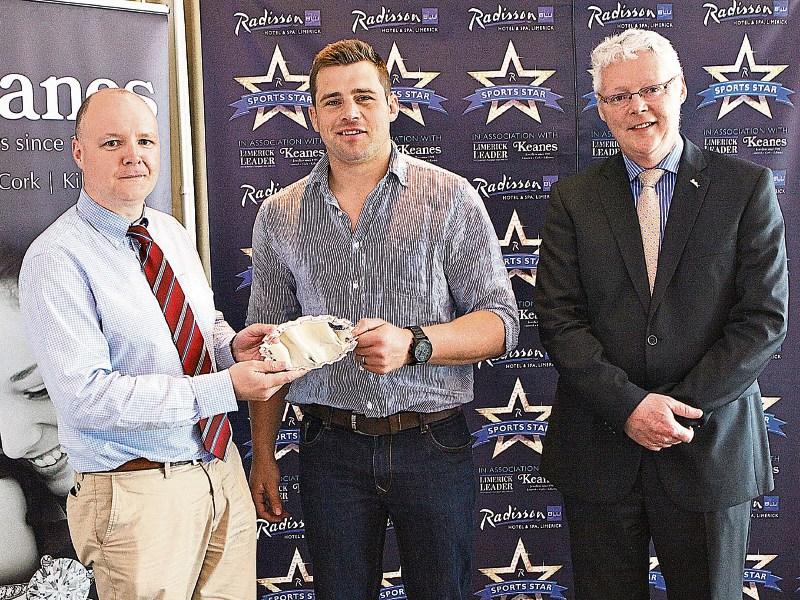 MUNSTER captain CJ Stander has had the best year of his rugby playing career – and it’s not over yet.

South African-born back-row Stander was rewarded for a string of outstanding displays for Munster in recent seasons when awarded his first cap for Ireland in their 6 Nations opener against Wales at the Aviva Stadium in February.

The affable 25-year-old from George was ever-present for Ireland through the 6 Nations, bringing his tally of caps to five and scoring two tries.

Stander looks sure to be included in Irish coach Joe Schmidt’s squad which travels to his native South Africa for a three-test series against the Springboks next month.

It was for his achievement in being capped by Ireland  that former South African U-20 captain Stander was awarded the February Limerick Sports Star award.

Stander said: "On a personal level, this, for sure has been the best season of my career. I couldn't have dreamt any better what I have done and what I am probably going to have to do in the next few years.

”On a personal level it has been unbelievable, I have learned a lot about the players, the characters they have and coaches. That is important for me.”

The recent IRUPA Players’ Player of the Year award winner was pleased that Munster managed to finish the season with two wins which secured their place in next season’s Champions Cup.

Stander said: "We said the last two weeks that we wanted to win the last two matches and end the season on a high. A sixth place finish is not a high, but we needed to qualify and we did that.

"I am proud of the boys the way they stood up, especially the younger boys. They got the win. I am delighted for the coaches and players to get some result at the end of the season.”

Munster’s competitive season may be over, but squad members will continue to train until the end of the month.

"My plan is to keep on training for the next three weeks, keep fit. Hopefully I will get selected in the group with Ireland to go to South Africa

"I would look forward to that to play in front of my family, my supporters in general. To put on an Irish jersey again will be a great honour again.

"Before all this you grow up in a country (South Africa) and you always want to play for that team. This summer Tests between Ireland and South Africa are the one you want to play in because it is going to be nice and tough, two great teams going head to head against each other and I am looking forward to it.

"I think I will be the toughest one in my career so far if I get selected, three tough matches. I am looking forward to it.”

By the time Stander returns to Munster, fellow South African Rassie Erasmus will have taken up the rold of Director of Rugby at the province.

Stander is looking forward to working with the former Springboks back-row forward.

Munster may have endured a disappointing season, but Stander remains optimistic about the province’s future.

“It is rugby, you start with a clean slate next season. I think there are a lot of guys coming back from injury which will provide a big boost.

“We have a new Director of Rugby in Rassie coming in. I think we gave ourselves something to play for next season in those last two matches.

“What we have done at Munster in those last two weeks against Edinburgh and the Scarlets is play some good rugby. Supporters were there in huge numbers at both games.

“I reckon the fans have something to support next season. Hopefully, they will be out in large numbers next season.”