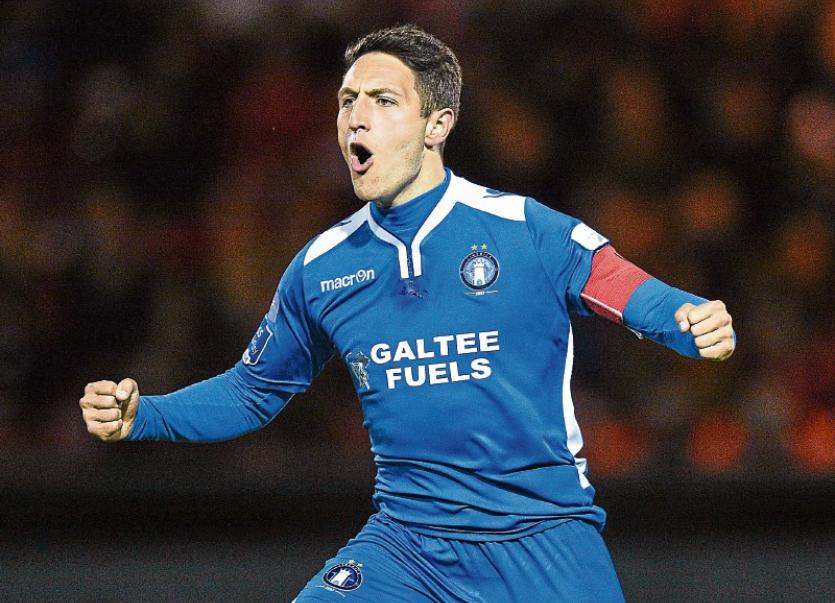 CLINICAL Limerick FC powered their way into the semi-finals of the EA Sports Cup thanks to a convincing 2-0 victory over Galway Utd before 937 paying customers at the Markets Field on Tuesday night.

Goals in either half from teenage central defender Paudie O’Connor and team captain Shane Duggan helped Martin Russell’s side take a giant step towards recording their first EA Sports Cup success since 2002.

Robbie Williams returned from suspension to start in the Blues defence, but Séamus Sharkey (head) and Garbhán Coughlan (knee) missed out.

Limerick missed a great chance to go in front on four minutes when Stephen Kenny crossed from the right, but the in-rushing Lee-J Lynch somehow managed to blaze the ball wide at the back post.

Limerick fans in a very healthy attendance were baying for a goal in the 25th minute when Robbie Williams thunderbolt effort from all of 30 yards smashed against the crossbar. Home players and supporters were adamant the ball crossed the goal line, but the match officials waved away the appeals.

Limerick FC were in front two minutes later, however, when 18-year-old defender O’Connor smashed the ball home after Shane Tracy’s free kick fell kindly to him inside the penalty area. It was no more than Martin Russell’s side deserved.

Galway, who made seven changes from the side which played Longford Town in the Premier Division at the weekend, failed to record a shot on target in the opening half as the Blues maintained their 1-0 advantage into half time.

Limerick took a firm grip on the game in the 52nd minute when Man of the Match Duggan latched onto a neat past from Sean Russell and deftly flicked the ball past Galway ‘keeper Kevin Horgan into the net.

Galway Utd came close to pulling a goal back on 67 minutes but substitute John Sullivan saw his flicked header smack against the Limerick crossbar before being cleared.

And moments later Limerick-born Gary Shanahan dragged his effort for the Tribesmen wide from a favourable position.

However, despite those let-offs, Limerick maintained their tight grip on the tie and eased into the last four of the competition.

Next up for the Blues, 12 points clear at the top of the First Division, is a league tie with Cobh Ramblers at St Colman’s Park on Saturday night. 7.15pm.