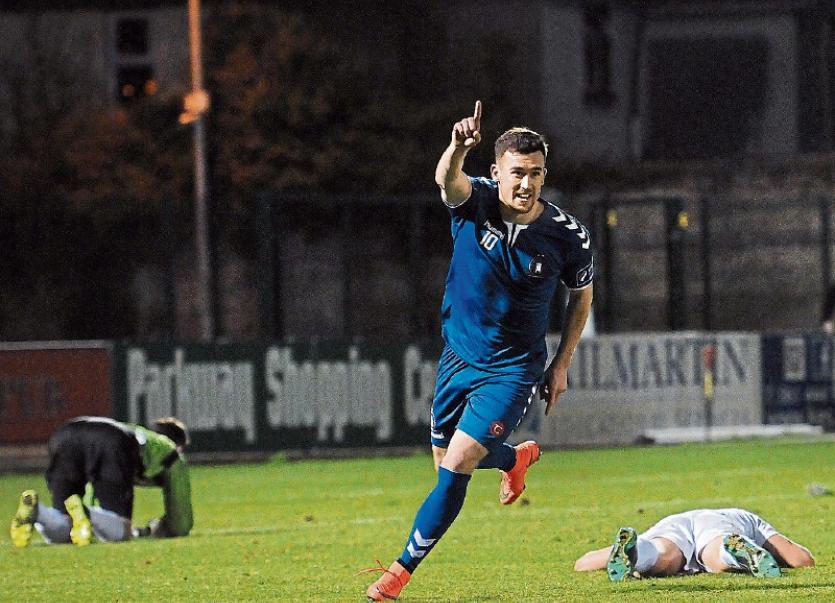 IN-FORM Limerick FC powered their way into the quarter-finals of this season’s EA Sports Cup thanks to an emphatic 4-0 victory over Premier Division Wexford Youths at the Markets Field on Tuesday night.

The free-scoring duo of John O’Flynn and Aaron Greene netted two goals each as 2002 League Cup winners Limerick ease past an understrength Wexford side before a healthy attendance of 705 paying customers.

The victory helps Martin Russell’s side maintain their excellent start to the season which has seen the Blues take a maximum 21 points from their opening seven First Division games in building a 10-point lead at the top of the table.

For Wexford Youths, Ryan Delaney was the only survivor in their starting team from their Premier Division lineup against Saint Patrick's Athletic on Friday night.

Limerick FC came within a whisker of opening the scoring on 18 minutes but John O’Flynn’s header was parried by Wexford keeper Matt Connor before skimming off the top of the crossbar.

Martin Russell’s charges continued to dominate possession and after 27 minutes some excellent attacking play opened up Wexford with Shane Tracy playing in Aaron Greene, but a Wexford defender blocked the ball behind.

Limerick deservedly took the lead on 32 minutes when the in-form Aaron Greene fired home superbly after a lay-off from O’Flynn to bring his tally of goals for the season to six.

The Blues doubled their lead six minutes later when O’Flynn turned superbly in the penalty area before firing home. It was O’Flynn’s seven goal of 2016 and the Blues 40th goal in all competitions this season.

A dominant Limerick side comfortably maintained their two-goal advantage until half-time.

Shane Tracy came very close to adding to Limerick’s lead on 64 minutes after a surging run, but his well hit effort flashed just outside the left hand upright.

Limerick secured their passage to the quarter-finals when O’Flynn tucked home his second goal on 73 minutes from inside the penalty area after substitute Coughlan played him in.

And not to be outdone, Greene bagged his second of the night in stoppage time.