Foley frustrated as discipline again an issue for Munster 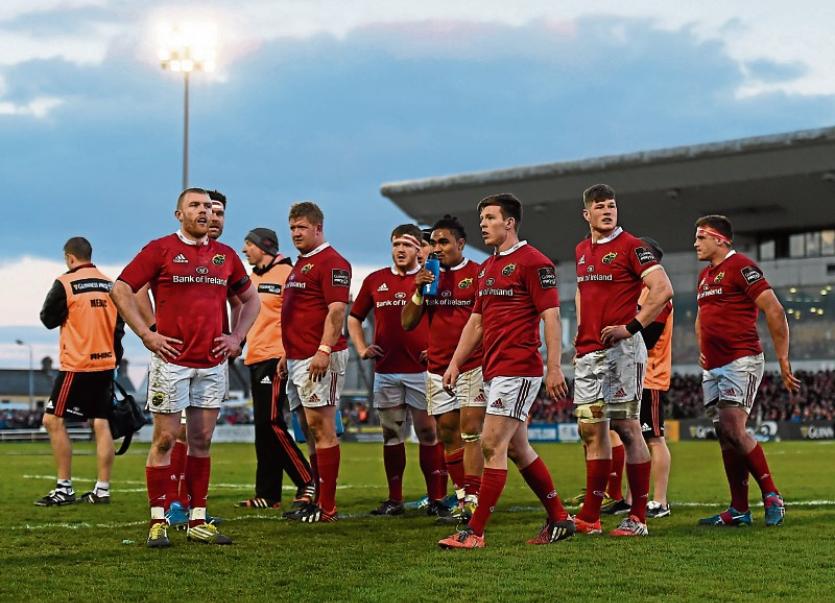 Colm Kinsella in the Sportsground

MUNSTER head coach Anthony Foley admitted his side’s discipline needs to improve, but insisted prop James Cronin should not have been sin-binned at the Sportsground on Saturday night.

Munster had two players yellow carded and conceded 12 penalties in the opening 54 minutes alone as Connacht completed a first ever home and away double over their neighbours in the Guinness Pro12.

Foley’s charges led 14-6 after 32 minutes when prop Cronin was sin-binned for collapsing a scrum on half way.

Second row Billy Holland followed Cronin to the sin bin soon after for not rolling away five metres from the Connacht line as Pat Lam’s side rallied with 14 points to lead 20-14 at half-time.

Foley said: ”I don’t think it was the referee’s call, it was the touch judge’s call against James (Cronin).

“If you look at it and the camera is good on that side of the pitch, green three collapses, feet out, BJ Botha penalised for years for it. We get a yellow card and a penalty. Go from there.

“You need to look at the penalty counts. They had massive changes in the game. That is how most teams can shift up and down the pitch.

“We scored a couple of lovely tries while playing into a big wind. 14-6, I thought we were good value for that and the game left us.

“Some of it was within our control, some of it wasn’t. It is hard for the 10 minutes before and after half-time where you really get exposed.”

Munster’s crucial next outing in the penultimate series of Guinness Pro12 regular series fixtures is against an Edinburgh side which shade them for sixth place due to their superior points difference.

“That is the most important thing. I watched Edinburgh against Leinster last (Friday) night in the RDS. They are a very good side, stacked with internationals.

“They will be a hard side to shift, but we need to shift them. We need to make sure we are ready for that job.

“It is professional sport. We need to get down and dirty and we need to get points. We have been that way for a while, the last number of weeks.

“Some games have gone or way and some haven’t. We need to focus right back in on ourselves and make sure we get our jobs down.

“Connacht have been growing for a while. They are a very good side and are very good to watch. Even watching the games as part of building a preview for them, they are a good side.”

Foley said the emphasis in preparing for the remaining two regular season fixtures against both Edinburgh and Scarlets would be on ensuring the players are fresh for the key assignments.

“It’s very clear what we need to do now. Is it achievable? Yes it is, but it’s going to take hard work. It’s important as a group we stick together and make sure we get out the backend of it.

“It’s hard. You look around at the changing room and everyone is looking down at the floor. It’s not the lack of effort.

“Just sometimes you need to experience stuff like this. It’s now about revealing the character within the group.”

The bonus-point means that Connacht have qualified for next season’s Champions Cup.