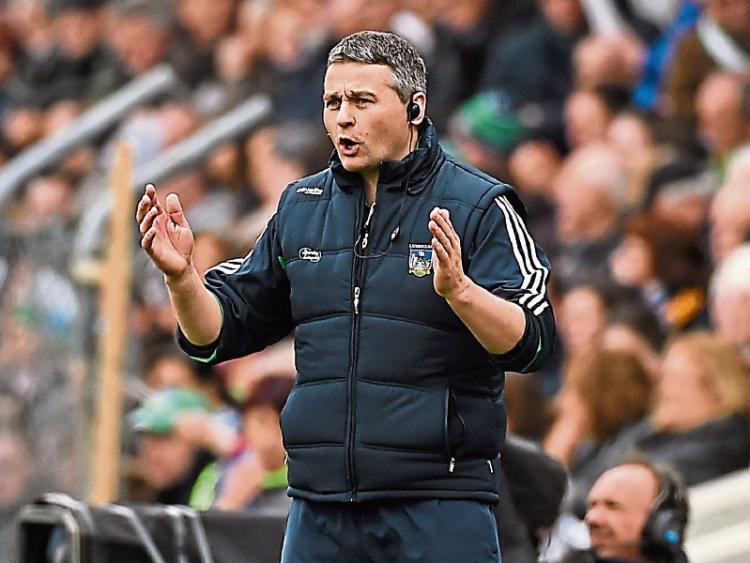 WHEN Limerick last played in an Allianz Hurling League final TJ Ryan was full back.

That was 2006 when Limerick suffered final defeat to Kilkenny. TJ Ryan is now Limerick manager and the quest for a 12th league title still stretches to 1997, when the Garryspillane man also played.

On Sunday his Limerick side travel to Thurles with reigning league champions Waterford the opposition, as both vie for a May 1 final against Clare or Kilkenny.

“I see this as a good opportunity – it’s the semi final of a national competition,” said Ryan this Wednesday.

”Waterford are favourites and we are all aware of what they have done over the past year or so. Definitely in terms of development they would be a bit ahead of us,” outlined the Limerick manager.

”This is a major challenge for us. It’s another step up.”

But it offers a timely progress report for the Limerick management and players ahead of the break to a June 19 Munster SHC semi final against Cork or Tipperary.

”Given our date for the championship we are very much focused on this semi final. It’s a game we want to win and we want to build on the last day out,” said Ryan.

”The return of the Na Piarsaigh players and the win over Dublin has seen everyone step it up a gear. When you get any win there is a pep in the step at training and that is what we have seen,” he explained.

“I had a bit of a rant afterwards but what I can say is that this group of players are working really hard and that is something that only those inside the camp will ever be able to see. Sometimes they don’t get the credit they deserve for making the lifestyle choice that all inter-county players make,” said Ryan in defence of his players and referencing his post match interview in Dublin, which saw him hit out at “vultures” in the media with “hidden agendas”.

”This is a tougher test, there is no doubt,” he said of 4/7 favourites Waterford.

Derek McGrath’s Deise side have formulated a system that requires a huge work ethic and players to drop into defence and break forward at pace.

Limerick borrowed somewhat from this system in the quarter final win over Dublin, but more tactical switches are expected in Semple Stadium on Sunday.

”There will need to be a certain amount of realigning – we have looked at Waterford and know what they are about. Dublin were a bit easier to plan for because they play fairly straight forward. Waterford have a plan and stick rigidly to that and we have to plan for that,” said Ryan who traveled to Wexford to watch Waterford’s quarter final win over Liam Dunne’s side.

Ryan added: “There could be a bit of chess early on”.

Limerick have met Waterford three times in recent seasons – Limerick wins in the Waterford Crystal Cup of 2015 and Munster Senior Hurling League of 2016, along with a 2015 league draw.

"I remember we played Waterford in Kilmallock last year but their system has come a long way since then. They are the current league champions and champions are always hard to beat. They have a very experienced spine to their team and are defensively very strong and even Kilkenny only scored 0-10 against them.”

Clearly Waterford are one of the form sides in hurling.

”There won’t be much in it, I think. They might be a bit further down the line than us but last year we were both in Division 1B. When you look at the quarter finals three of them had only one or two points between the teams. The margins are very fine.”

The Limerick team will be named after training on Friday evening with Tom Condon and Cian Lynch back to supplement the panel that beat Dublin to reach a first league semi final since 2006.

”We brought a good work rate and some great pride,” said Ryan of the Dublin quarter final.

As a baseline, supporters will want more of the same this Sunday in Thurles with Limerick very much unable produce back to back performances in recent years. Limerick have played 10 competitive games in 2016 – losing two, both to Clare. But Sunday should be the biggest test so far and another chance to ease the pain of missing promotion.