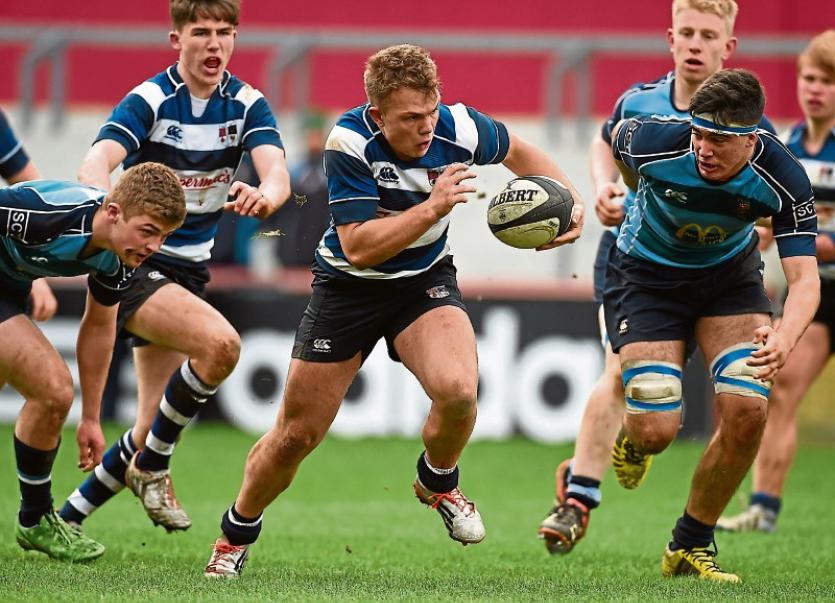 Action from the Crescent and Castletroy clash

CRESCENT College Comprehensive head coach Eugene McGovern was pleased with the composure the side showed in wiping out a 12 point half-time deficit to score a resounding Clayton Hotels Munster Schools Senior Cup semi-final win over Castletroy on Thursday.

Crescent College racked up 33 unanswered points in the second period, including scoring five tries, to set up a mammoth final showdown with CBC, of Cork, at Musgrave Park, on Sunday, March 13, 2pm.

Castletroy College had looked well placed to cause an upset when leading 12-0 in the Thomond Park semi-final. However, resilient Crescent upped their performance level several notches after the break to reach their third Senior Cup final in four years.

Eugene McGovern said: "We didn't perform in the first half for one reason or another. It took us 35 minutes to get going.

"The good thing about our team is that we put a lot of aspect on our fitness, the tempo of our game. We play a high tempo game. That is what got us the tries in the second half.

"We made a few mistakes in the first half. But our lads clearly weren't rattled because they came back into the game and got their heads right, pushed on.

"I was very impressed with some of our tries. It came down to the tempo our guys can play at. We have a lot of good guys, good individuals in our XV, also on our bench. They have that little bit to push on.”

Feeney said: "We should have scored off the phase of play when we won the scrum against the head at 12-14 down. I thought we should have gotten on offside penalty on one or two occasions there.

"We struggled to get quick ball. There were a lot of hands in there. But no matter what we should have controlled the ball, gone back to our system. But it is very hard to be critical. That was after 60 minutes of massive intensity.

"The lads were tired, we had a lot of changes made. I think they were excellent.

"The lads started really well. They bought in to the gameplan. I said beforehand that Crescent are very dangerous. We limited what they could do in the first half. As the game wore on, it was harder and harder to do that. As we got a few injuries and got more tired, we weren't able to keep the gameplan going.

"But you could see the effort put in by those lads. It is impossible to be anything other than proud of them the way they worked. They were superb.”