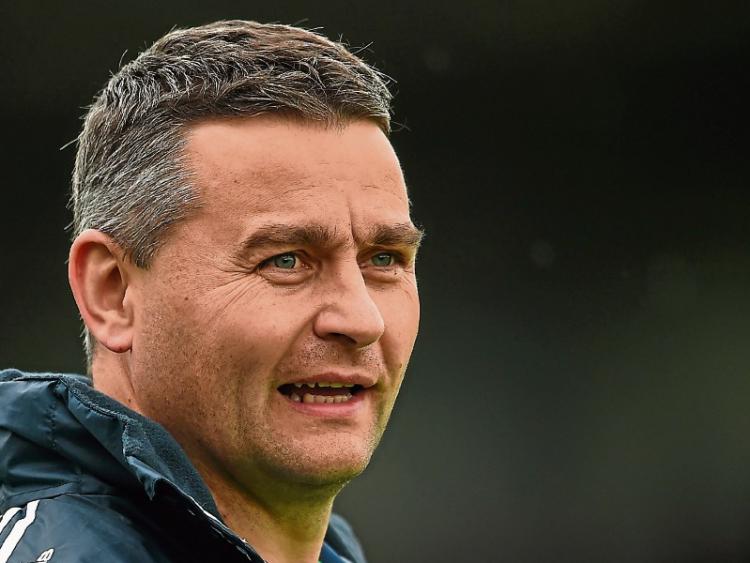 TJ Ryan makes no secret about the target – league promotion is the quest for the Limerick senior hurlers over the next two months.

This Saturday Limerick embark on a sixth season outside of the top flight in the Allianz Hurling League. Division 1B will see Wexford and Laois come to the Gaelic Grounds, while Limerick will be on their travels to play Kerry, Offaly and Clare.

By the end of March just the top team in the group will be promoted for 2017. The top four teams will advance to the league quarter finals proper but Limerick are not shying away from the number one goal – promotion.

“Especially this year with our championship game down for June 19 we can afford to really look at the league as a seperate competition,” said Ryan this Wednesday afternoon.

”February 13 has been on our minds for a long time and Saturday is a game that we just have to win,” said the Limerick manager of the clash with Liam Dunne’s Wexford under the floodlights of the Gaelic Grounds.

”January went quite well, although we would be a little disappointed to lose the Munster League final to Clare. We have a lot of work done and physically and from a hurling point of view I think we are in a good place.”

The influx of new talent brings a necessary freshness for 2016.

”All the new players bring great energy and learned a lot from playing with the Limerick intermediates and U-21 last year. The last couple of years have been disappointing but we just never got momentum or the bit of luck that we needed,” said Ryan.

While largely content with preparations, the lead-in to the league is hampered for all counties and Ryan thinks its time for change.

”Someone has to stand up and make the changes. The Fitzgibbon Cup needs to be over before the league starts and the All Ireland club championship needs to be in the calendar year,” outlined Ryan.

”People talk about the strength of Kilkenny but last year without their Ballyhale contingent they ended up in the relegation final. We are facing into a third year without club players and won’t have Na Piarsaigh involvement until April 1,” he explained.

“They (Na Piarsaigh) have a great chance now and for any of them to come in with us and for something to happen (injury) would be unwise,” he added.

That leaves Ryan with a panel of 32 and a dozen are still involved in Fitzgibbon Cup.

”Saturday is a very important game for us and we had players out in big Fitzgibbon games on Tuesday and they will play again next Tuesday and we are out again the following Sunday. It’s inconvient for me but I’ve seen too many teams playing in the Fitzgibbon Cup and there were no Limerick players involved so it is a good experience for them.”

Enroute to the final of the Munster Senior Hurling League, Limerick gave game-time to 32 players with eight making their senior debuts. Adding to the freshness in the inter-county camp is a new captain in the shape of Nickie Quaid and vice-captain Seamus Hickey.

In the backroom team there were also pre-season changes with Joe O’Connor the new strength and conditioning coach, Dinny Cahill the new hurling coach and 2015 Limerick intermediate manager Don Flynn, a new selector.

While a total of 16 members of Limerick’s All Ireland winning U-21 panel received call-ups, departed for varying reasons are Donal O’Grady, David Breen, Aaron Murphy, Conor Allis and Stephen Walsh.

“We were back at it early and we had all our players, even the Na Piarsaigh players, in December. I think we are in a good place but we all know that this is a results based business. We will be judged by what happens on the field and that starts on Saturday evening.”

On Saturday Limerick begin their quest to end six seasons outside of the league’s elite. Only the top team in Division 1B will be promoted and Davy Fitzgerald’s Clare are the 10/11 hot favourites to make an instant return to the top flight. Limerick are second favourites at 7/4, with Saturday’s opponents Wexford priced as 4/1 third favourites. Division 1B is completed by Offaly, Laois and Kerry.

While on-field matters are the focus of all this week, the Limerick manager couldn’t be feel for injury stricken Sean Finn.

“We we got the news of his cruciate over the weekend is was a sickner. It’s a big blow for him, his family, his club and Limerick. He came in with us this season and he ticked all the boxes and is definitely one for the future,” said Ryan of the Bruff U-21 player.

”We have to do everything now to get him back on the field again and that starts with his rehab. You can do all the training and preparations but then something unexpected comes along like this,” sighed the Limerick manager.

Saturday’s game against Wexford, which is live on Setanta Sports, is one of just two home games in the league for Limerick. The GAA have confirmed that a €5 discount is available on pre-purchased tickets. U-16s are free but match day prices for adults are €15. Tickets can be bought on www.gaa.ie or from Centra or SuperValu outlets and cost €10.

Limerick’s team for Saturday won’t be finalised until Friday night. There was Fitzgibbon Cup action for 13 players this Tuesday and Barry Nash plays colleges hurling on Thursday.

Barring any injuries, only James Ryan, Sean Finn and the Na Piarsaigh players are ruled out.