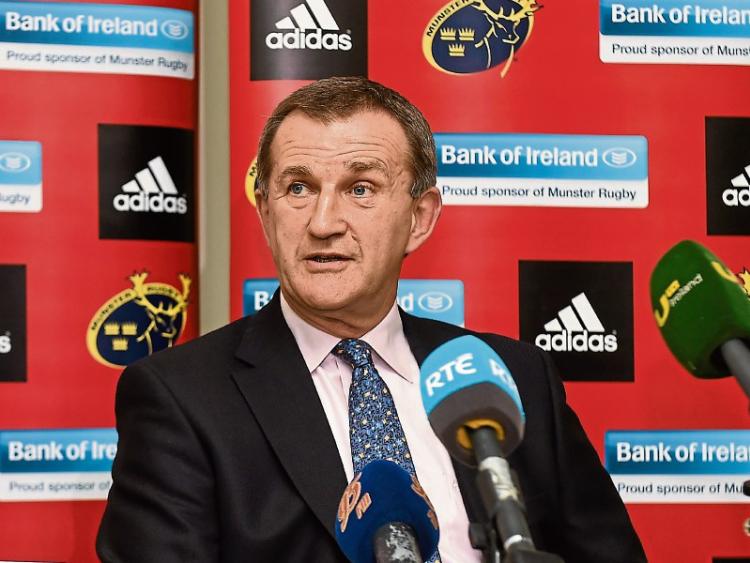 MUNSTER CEO Garrett Fitzgerald did an unscheduled press briefing this Tuesday at the Castletroy Park in the wake of the province’s exit from the Champions Cup on the back on an inept display against Stade Francais at Stade Jean Bouin.

Fitzgerald addressed a wide range of issues concerning Munster supporters as the province tries to come to terms with failing to make the knock-out stages of the European Cup for a second successive season and a horrific run of six defeats in seven games.

GARRETT Fitzgerald explained that Anthony Foley has been offered a one-year extension to his current contract to take him into the 2016/17 season, but said that Foley has not accepted or declined that offer yet..

Fitzgerald said: “Anthony had an option on his contract and has been offered an option on that area itself to tie in with the timeline that was on it.

“He specifically asked that it be parked, as he wanted to concentrate on team performance and he’s not in any rush at the present moment to do that. We’re quite happy at the moment to let it be as it is. The most important thing is team performance.. . .

"We'll review the situation once the Six Nations kicks off, that would be fair.”

The contracts for the remaining members of the Munster backroom team are also up for renewal at the end of the season. Fitzgerald said: “The other coaches are all out of contract at the end of June and no discussions have taken place in that area.

“That's purely by choice, given what's gone on and trying to get the team performance.”

Garrett Fitzgerald explained that Andy Farrell’s new advisory role with Munster would be for two days a week over the next four months.

Fitzgerald said: “He's (Andy Farrell) working as support, an advisor. Anthony remains in as the head coach role, there's no change in that.

I'm sure the whole idea is that he'll have opinions, he'll express them and discuss them but there's no change to the decision making.

“(Farrell’s role) It's predominantly with the coaches, it's a coaching advisory role. I'm sure he'll observe sessions, he'll make a contribution on the planning and organisation but at this present moment he's working with the coaching team.”

Munster CEO Fitzgerald said the selling of the naming right remained on the agenda as far as Munster Rugby is confirmed.

Fitzgerald said a consultant had been hired with a few to progression the idea. The CEO accepted it that selling the naming rights remains emotive for some fans.

“It’s still on the agenda but something like that will always be an emotive issue. The reality is that that is what is happening in every business in every professional sport, you see it all over the place and we’ve actually employed an consultant and signed with a consultant to promote that in 2016.”

Fitzgerald told the media briefing that owing €9 million of the €39 million cost of redeveloping Thomond Park was an ‘unbelievable position’ to be in so quickly after the 26,000 capacity venue had been re-opened.

“If you look at what Munster did over the good years, we developed a stadium that cost €39million that has only €9m owed on it after about 10 years. Lots of people would like to be in that position.

“Part of the long-term payment on that is the renewal of season tickets in two years’ time. Would we prefer to have more of the debt paid off? Yes, but as regards to a scaling of a debt over a 10-year period, to only owe €9m on €39m, that’s an unbelievable position to be in and we have to thank everyone that helped us with that.

“It does put a drain on cash-flow, and the IRFU have helped us in that situation to make sure that we’re able to do some of the things I’ve been asked about .

“We have put in two new pitches at Thomond, we have put in a new facility in Irish Independent Park in Cork, we are in the process of building a new training centre. We have constantly invested in the game, which you have to do.

“The business we operate in is very difficult to plan for. You plan as much as you can. When we won our first Heineken Cup, I don’t think some people in the room even knew who Toulon were. They were in Pro D2 at the time, I think.”

”I think we’re at about €12m for the Pro12. It’s a completely new market that’s ever changing and you throw in private investment with that.

“I think no matter how much you do and how much you plan, it’s such a changeable feast, it’s very hard to keep with it.”

Construction work is on going on Munster’s new training base at UL which is located adjacent to the UL Sports Arena. The centre will include state-of-the-art training faclities for the Munster squad, including weight rooms, medical and physiotherapy treatment rooms, offices, audio visual suites, meeting rooms and a 50-seater lecture theatre.

Fitzgerald said: “It is under construction as you see over in the thing itself and it is due completion, I think it is next August. the last two months the weather has probably knocked a week off it but it is purely on course for when it was meant to be delivered but the weather may add 6-8 weeks onto it. We don't know that. We get a monthly report on that.”

MUCH speculation in recent months has centred around the futures of Keith Earls, Conor Murray and Simon Zebo with Munster as all three are out of contract at the end of the season.

Munster CEO Fitzgerald is upbeat about the prospects of the trio of international stars remaining with the province.

“Conor Murray is out of contract, is in an advanced stage in negotiations and has quite an attractive offer on the table that I am sure he will make up his made quite shortly on. Keith Earls is in exactly the same situation.

A lot has been written on Simon’s situation, and I speak to Simon regularly about what he wants to do.

“We do an annual review every year where there are certain KPI set out for each CEO,” Fitzgerald explained.

“I try my level best to achieve them and to work beyond what those are. To date all my reviews have been satisfactory.

“Have I considered my position? I frequently think about it but I am positive. I think I am making a contribution.”