Munster knocked off top of PRO12 by Scarlets 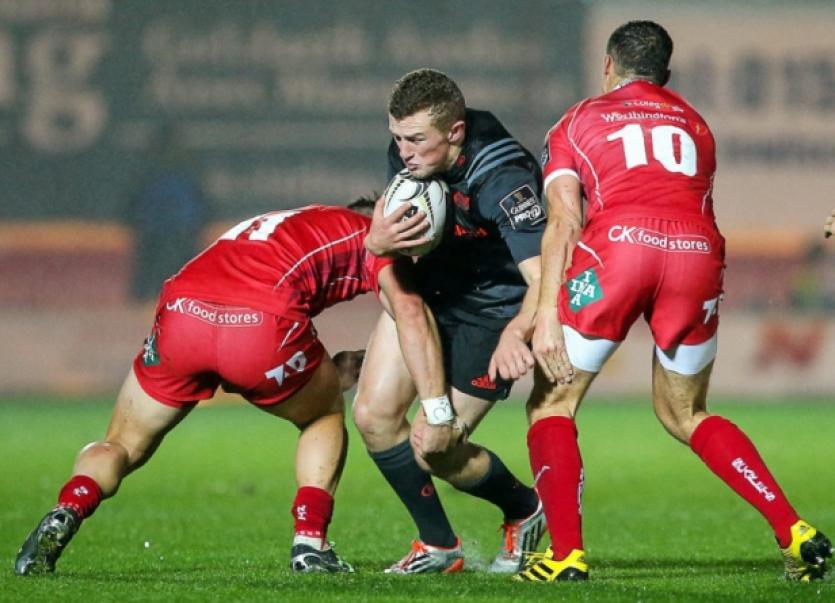 MUNSTER were toppled from the top of the Guinness PRO12 table after suffering a disappointing, 25-22, last gasp defeat to Scarlets at Parc y Scarlets on Friday night.

MUNSTER were toppled from the top of the Guinness PRO12 table after suffering a disappointing, 25-22, last gasp defeat to Scarlets at Parc y Scarlets on Friday night.

Anthony Foley’s Munster side suffered their first defeat of the PRO12 season as Steve Shingler stepped up to land two late penalties and guide the unbeaten Scarlets to the top of the table.

Munster led by 13-6 at half-time thanks to two Ian Keatley penalties and a converted try from the in-form Andrew Conway. However, a second half fight-back, coupled with poor Munster discipline, allowed the Welsh side to stay in touch, and two closing penalties from the ice-cool Steve Shingler were enough to clinch a 25-22 triumph at the death.

Tyler Bleyendaal was a late withdrawal from the Munster team after pulling up with a tight quad during the warm-up. Keatley started at number 10 with Rory Scannell added to the bench.

It was young flanker Jordan Coghlan’s first start for the province, while Ronan O’Mahony saw his first action of the season coming on in the second half for right winger Stephen Fitzgerald.