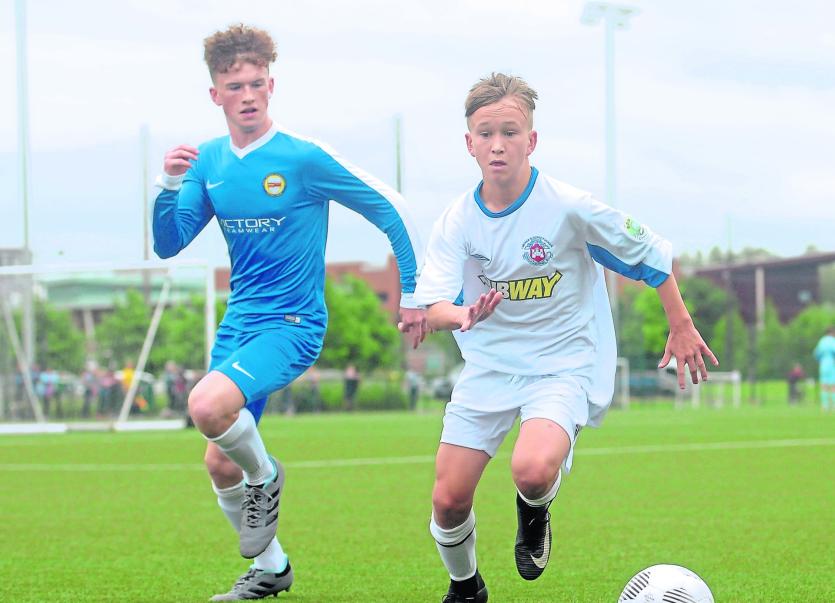 Cael Gaffney, right, of the Limerick District Schoolboy League, in action against North Tipp at the group stages of the 2018 Kennedy Cup at UL

THE draw has been made for the group stages of the 2019 SFAI New Balance Kennedy Cup which will again be staged at UL this June.

Unlike previous years, the 32-team U14 inter-league competition will start 24 hours later than usual this year, running from Tuesday, June 11 to Saturday, June 15 inclusive.

The Tuesday start in 2019, rather than the traditional Monday one, is to avoid a clash with the Rep of Ireland's UEFA European Championship qualifying fixture against Gibraltar at the Aviva Stadium on Monday, June 10.

Meanwhile, the Limerick County Schoolboy League are in Group 5, pitted against the Kildare and District Underage League, as well as the Kerry and Clare Schoolboy Leagues.

2018 Kennedy winners the DDSL (Dublin and District Schoolboy League) are joined by Kilkenny, Athlone and Drogheda in Group Six.

In 2018, Limerick and District Schoolboy League claimed an eighth-placed finish overall after losing out 4-3 on penalties to Dundalk in their final play-off game, having earlier topped their group to make the quarter-finals proper of the Kennedy Cup.

Limerick County Schoolboy League claimed a 12th place finish at the 32-team event after suffering two penalty shoot-out losses in the play-offs, 5-4 to the Kilkenny League and later 6-5 against Clare.