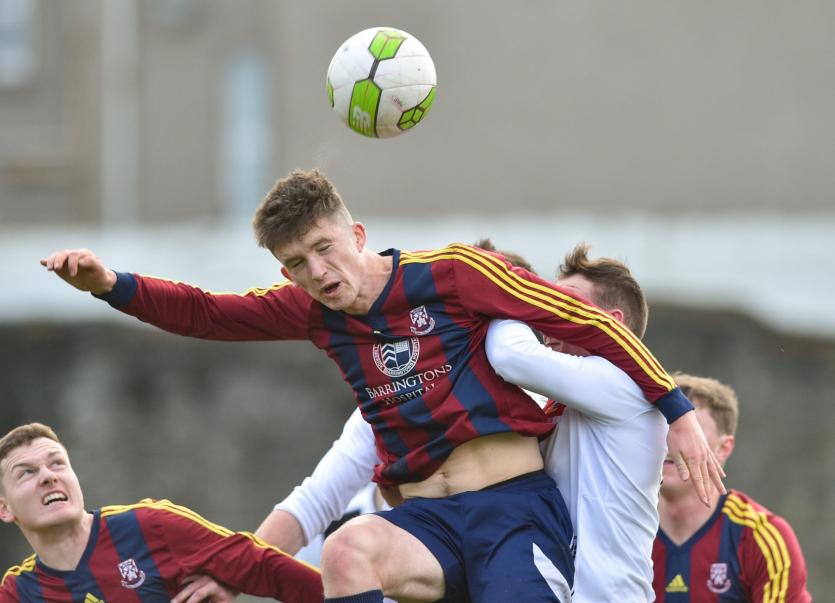 Sean McSweeney, of UL, wins this header against Garan Manley, of UCC, in their Rustlers Collingwood Cup final at the Markets Field this Wednesday

UL'S hopes of securing an historic first ever Rustlers' Collingwood Cup title ended in bitter disappointment as the tournament hosts suffered a dramatic 2-1 extra-time final defeat to UCC at the Markets Field on Wednesday afternoon.

UL had looked on course to end their long wait for the Cup when holding a 1-0 lead heading into the final three minutes of normal time in a highly competitive final played out before a large attendance.

However, two goals from UCC, the first in the 87th minute, and crucially the winning goal in the third minute of extra-time,  ensured the prestigious third level soccer tournament would be heading to Leeside.

UL went in front on 37 minutes when. following a long throw-in by Shane McCallion, the lively Alan Murphy latched onto the ball, before flashing a terrific low shot into the bottom right corner of the net. It was a superb finish.

UCC had looked the more likely to score through the opening quarter, with Patrick Crowley hitting the post.

UL keeper Sean McCormack had to be at his best in the 17th minute when he thwarted McKevitt in a one-on-one situation.

UL retained their 1-0 lead until half-time and the Limerick students held an edge throughout a keenly-contested third quarter.

There was little if anything by way of clear-cut scoring opportunities during that period.

However, as UL moved within touching distance of the Cup, UCC struck for a dramatic equaliser. Simon Falvey got the faintest of touches to a right wing cross from Patrick Crowley to flick the ball past home 'keeper McCormack.

It was tough luck on UL, who had looked comfortable defensively to that point.

The final then went to two 10-minute periods of extra-time. UCC made the best possible start to extra time when the excellent Robert Slevin headed the Leesiders in front with a close range finish.

It proved to be the decisive goal as Ian Sullivan's spirited and resolute UL side simply couldn't manage to grab a precious equaliser in the remaining minutes of extra-time.

Tournament hosts UL had defeated Ulster University 2-0 in Tuesday's semi-final played in wet conditions, while the Castletroy side had eased past Maynooth University 3-1 in their quarter-final tie played at UL on Monday afternoon.

Incidentally, the last time a host won the cup prior to this week was back in 2003 was when UCC lifted it on their own turf.

The Collingwood Cup has enjoyed constant presence in the Irish football calendar for over a century, with the cup first presented by Bertram Collingwood, a Professor of Physiology at UCD, in 1914.