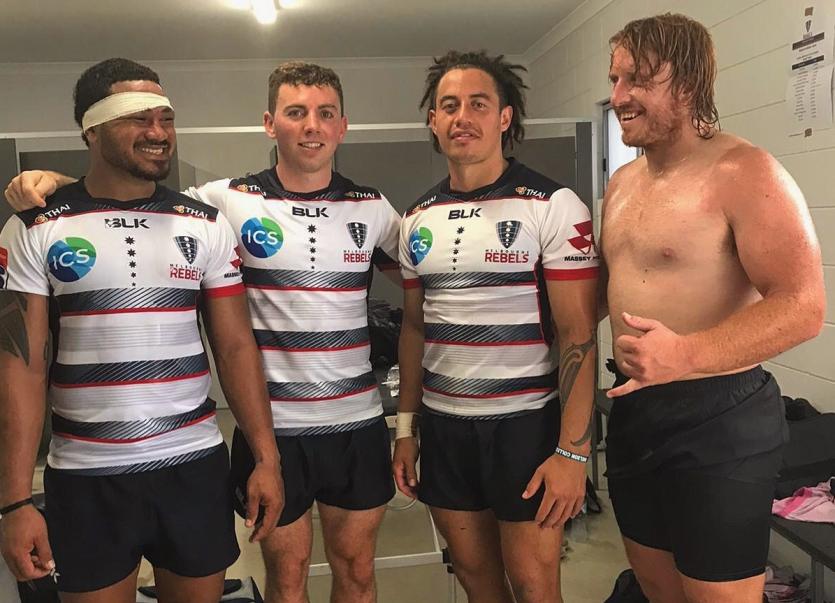 A TALENTED Limerick scrum-half, who has made his debut for Super Rugby side, the Melbourne Rebels, has described it as 'amazing experience'.

Twenty six-year-old Jamie Glynn, from Shelbourne Road, featured for Australian Super Rugby side, the Rebels, in their pre-season fixture with the Queensland Reds at Gladstone, north of Brisbane.

Glynn, who began playing rugby with Garryowen FC as a four-year-old, moved to Australia to work before Christmas.

The Limerick man, an accomplished All-Ireland League scrum-half, admitted that he thought he was initially being prank called when the Rebels contacted him to join their star-studded squad for pre-season.

In a hectic week for Glynn, the Limerick man was juggling doing job interviews, while training with the Super Rugby side.

Jamie Glynn, who was previously a member of the Munster Academy, told the Limerick Leader: "I got put in touch a few weeks back with a club side here called Harlequins who had a hand to play in it, but I had yet to start pre-season with them.

"When someone from the Rebels set-up rang me I thought it was one of the lads prank calling me initially to be honest, so I was bit stand offish on the phone!

"I then met with Pom Simona, who coaches the Melbourne Rising (their 'A’ team equivalent) who actually played in Ireland with Wanderers and Lansdowne a while back.

"He was recalling playing alongside a younger Devin Toner in his Lansdowne days. The initial conversations were around getting involved with the Rising setup in the coming months, but a later phone call led to an invitation to train with the Rebels squad who were nearing the end of pre-season before the Super Rugby season kicks off.

"Pom did a bit of a background check with Andy Skehan, who coached me in UCD, as he had been involved with Wanderers around Pom’s time there.

"I crossed paths with John Langford recently who was helpful in chatting through the rugby scene here in Australia in between some old Munster tales!

"One of the senior scrum halves at the Rebels is returning from injury, while another is due back from Japan in the next while, so I guess they were looking for a bit of cover for the pre-season games.

"After I got the call from the Rebels I tried to put down a solid’s week training before hand with the help of former Garryowen seconds Player of the Year David Canny, who is over here in Australia with me, but still I was nervous about how I would hold up.

"My last competitive game was in early November with Terenure in the All-Ireland League before I left Ireland. I was trying to get up to speed with the level of detail and fitness in between rushing from training to do job interviews and vice versa, so a bit of a mad first week!

"Perhaps a blessing in disguise that most offices closed down for two to three weeks in December with the combination of Christmas and Summer holidays here which allowed me to be available for this chance.

"I was a bit star-struck initially trying to introduce myself to the likes of Australia internationals Matt To’omua, Dane Haylett-Petty, but everyone was incredibly welcoming, albeit I raised an eyebrow or two mentioning I arrived to the country before Christmas as a 26-year-old accountant rather than a young aspiring pro rugby player!"

Glynn, a former Leinster Schools Senior and Junior Cup medal winner with Clongowes Wood College, said the stifling heat and intensity of the Rebel training sessions was a challenge, although he thoroughly enjoyed the experience.

"Being captivated when I was younger by Super Rugby, watching on Saturday mornings back home on TV, made the whole thing all the more exciting.

"It has been a fantastic experience training alongside Australian internationals while the Fijian scrum-half from the World Cup Frank Lomani is a part of the squad also, who is a quality player. As you would imagine it is a very professional high performance environment which is quite demanding but certainly the heat mixed with the intensity of the training was a challenge.

"The Rebels train at the AAMI stadium in Richmond which is in very close proximity to various sporting set-ups, with the MCG (Melbourne Cricket Ground) nearby, Collingwood AFL’s training facilities, Melbourne Victory, who also train out of the AAMI and the Australian Open Tennis Championships now underway across the road at the Rod Laver Arena, so several athletes of different backgrounds were buzzing around the place all week!

"It was fascinating to witness and an interesting insight into the tug of war for top athletes in the city."

Glynn and his Rebels team mates flew from Melbourne to Brisbane the day before their pre-season clash with the Reds.

He said: "I happened to be sat between Geoff Parling (British & Irish Lion) and Harry Potter, who is a winger on the flight which was an interesting sentence when you say it out loud!

"I managed to get a bit of a run for 15/20 minutes in the game with the Reds which was great. The game itself was a bit one-sided with the Reds naming a first string side that included James O'Connor among other Wallabies, but that only added to the occasion.

"My more basic motives for playing rugby coming over to Melbourne were to meet new people and keep fit, not for a second did I think my first game in Australia would be against the Queensland Reds! I certainly got the chance to meet a lot of great fellas whom I’m looking forward to catching up with again soon.

"The build-up during the week made me realise that I was missing the buzz of playing in the AIL, more recently with Terenure, but also with UCD and Garryowen before that.

"I told myself to just savour and enjoy the experience while not putting too much pressure on myself which certainly helped ease any nerves. If nothing further comes of it, it’s been an amazing experience and the fact that this whole thing has triggered so many nice sentiments to be said about me is something to be proud of in itself.

"I think I’ve made my family proud which only reinforces the emotion. I’m sure my dad (Liam) would prefer me to be running around Dooradoyle, but the fields of Melbourne will have to do for now."

So what does the future hold for Jamie Glynn in terms of rugby in Australia?

"I started a job this week back in Corporate Finance with Deloitte which meant I had to take a step back so the experience with the Melbourne Rebels first team is short lived, but I imagine the more experienced players would have been re-introduced this week anyways with the season so close.

"There will be opportunities with the Rising (‘A’ team) games either side of the club league in February/March and then again from July to October when the NRC (National Rugby Championship) kicks off which is what the original conversations were based on.

"Training sessions for that side are in the evenings, so I will hopefully be involved in that in so far as I can with work. The fixture list includes an away trip to the Fijian side in the NRC so another example of the doors rugby can open and the cool places to experience along the way."