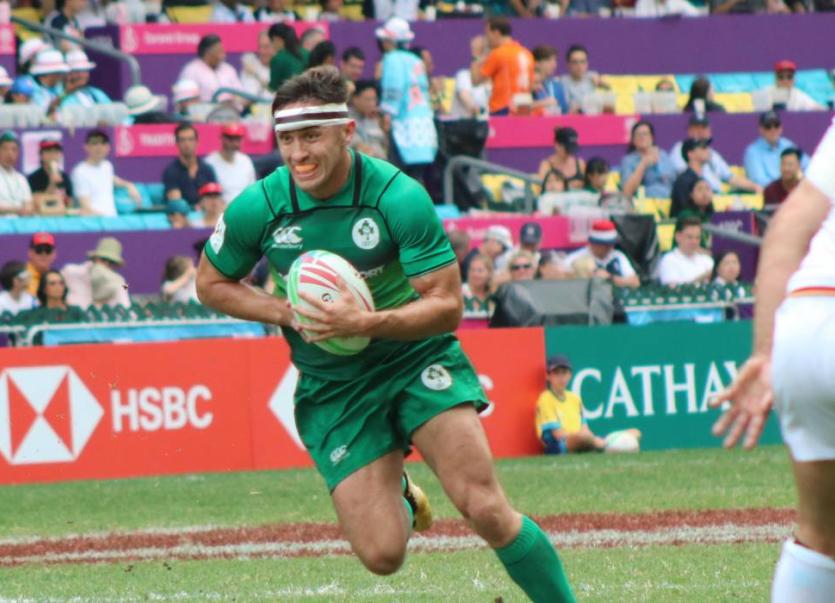 Limerick winger Greg O'Shea, of Shannon RFC, in action for the Ireland 7s side at the World Rugby 7s Qualification Tournament in Hong Kong

LIMERICK man Greg O'Shea has been included in the Ireland Men's team for next weekend's annual Elche 7s tournament ahead of the first combined HSBC World Rugby Sevens Series event of the 2020 season.

Shannon clubman O'Shea is included in the 15-strong Ireland Men’s team which competes at the annual Elche 7s tournament in Elche, south east Spain on Saturday and Sunday.

Ahead of their debut appearance as a core team in Dubai, the Ireland Men have been paired in Pool B alongside Portugal, Scotland and local outfit Viator 7s, while Stan McDowell’s Ireland Women, who opened their campaign with an eighth-place finish in Glendale, will face France, Belgium, Emerging France, Spain and Poland this weekend.

The Billy Dardis captained side will hope to build further momentum ahead of their season-opener in Dubai following strong performances during pre-season in Chester and at the 02 Arena.

Ireland Women, meanwhile, will be captained by Lucy Mulhall and their travelling squad includes 11 of the players who featured in Glendale last month, as Claire Boles, Luncida Kinghan, Maeve Liston and Grace Moore are handed a big opportunity ahead of the World Series legs in Dubai and Cape Town in December.

"It’s always a really good tournament and the preparation for both the Men’s and Women’s is an excellent building block as we look towards Dubai," Eddy said ahead of the trip to Spain.

Ireland Men open their campaign against Portugal on Saturday morning before further Pool games against Viator 7s and Scotland, while Ireland Women are first in action against France at the Estadio Jose Díaz Iborra.