Don't Mind Me: Until we meet face-to-face again 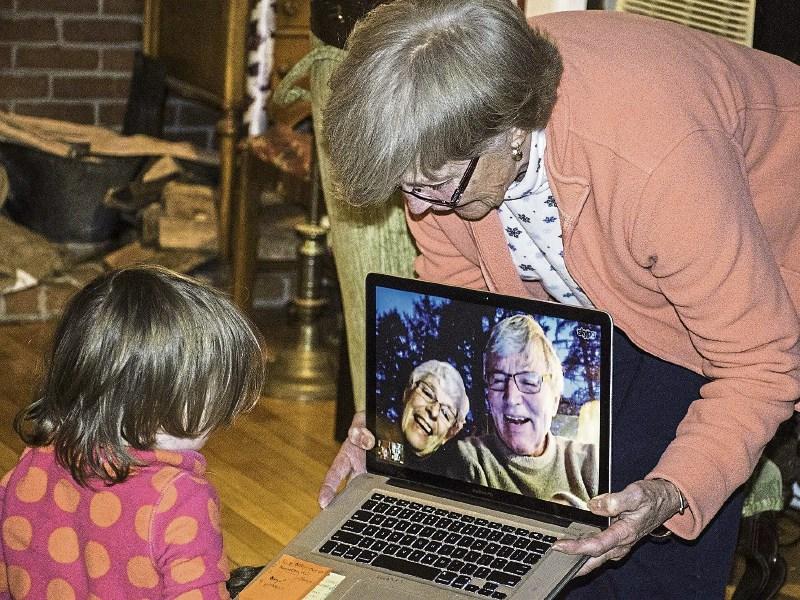 Patricia is using FaceTime to keep in touch with grandchildren stock picture: Pixabay

HARD to believe that it’s now only a couple of weeks since some of us were moaning about ‘never having a moment to ourselves’. Now we have plenty of them and we don’t know what to do with ourselves.

Having too much time on your hands is something of a pejorative term when it comes from anyone but yourself. In any case it’s not conducive to any worthwhile endeavour, as I’ve learned to my great dismay. I always said I’d write a book if I ever had enough time. Well Covid-19 has certainly called my bluff on that one. I had too much time on my hands too when I first retired from work and I didn’t do anything earth-shattering – apart from standing in a gap every time himself was letting out the cattle. But then, social distancing wasn’t an issue. Not that I spent the time socialising either, mind you, but it was good to know that finally, I had the time to do so.

Now, we’re in the midst of a crisis and everyone I know is enduring social isolation with admirable patience and civility, while for me, time is draggin’. Escapism, via a good book, is no longer an option and my pledge to attempt ‘Finnegan’s Wake’ again proved too nerve wrecking in the current atmosphere. As for the home baking, all I can say is that it didn’t really go to plan either. Despite weighing the ingredients scrupulously, mixing them carefully and kneading the dough like a wrestler, the cake still didn’t rise and when I took it out of the oven, it sank in the middle with what I swear was an audible sigh. Put it down to a lack of practice. I don’t know what we’re going to do if the shops run out of bread, but I’ve washed my hands completely of the home made dough.

Meanwhile, the caretaker Government is playing a blinder in the fight against the cursed virus. If there was an election in the morning, I think they’d be returned unopposed. Come to think of it, I’m playing a blinder myself, seeing that I have so much time on my hands and seeing that my herd instinct is usually so unreliable. Apart from the occasional trip to the supermarket, I’m in rigid self -isolation, waving at my grandchildren through the window and going for walks through the fields instead of high-tailing it to the nearest coffee shop when I feel the need for human contact.

I’d like to be able to say that I’m in tune with nature instead, but I’m not. There are now too many moments ‘to see wonders in the grass’ - such as Paddy Kavanagh’s renowned primrose. Even the crows in our resident rookery are getting on my nerves.

Their raucous jabber wakes me from my troubled slumbers at five in the morning – as if I didn’t have enough time on my hands already – and the once fascinating sight of their exuberant spring socialising, looks a tad triumphalist now.

Other people with too much time on their hands have taken to social media to communicate with their fellow human beings, but I can’t do that because I’m now about 20 years behind the advance of technology. It’s just as well anyway, because I’m an alarmist at heart and might unsettle the nation with my panic-stricken tweets.

When I told my daughter that I was missing my grandchildren dreadfully, she introduced me to FaceTime.

It was better than nothing, I suppose, but it was a poor substitute for a hug. It was good to speak to them face-to-face again, except for the fact that I didn’t recognise myself in the picture, so distorted did I appear. The three-year-old didn’t recognise me either and went back to watching the more familiar Peppa Pig instead.

Meanwhile, crisis or no crisis, the nation continues its obsession with education and there’s uproar, as I write, over the cancelling of the oral language tests and the awarding of full marks to every candidate in oral Irish and foreign language orals. It’s particularly hard on the privileged, whose parents were able to invest in grinds or send them abroad or to summer Gaeltachts to get a better grasp of speaking the relevant languages, and now find they’ve gained no advantage at all.

As I said, I’ve too much time on my hands and how to fill it will be a challenge, especially if I’m going to be cocooned for any length of time. But as Samuel Beckett assured us, whether we fill it or not, the time will pass regardless.