Don't Mind Me: A little chaos is a wonderful thing 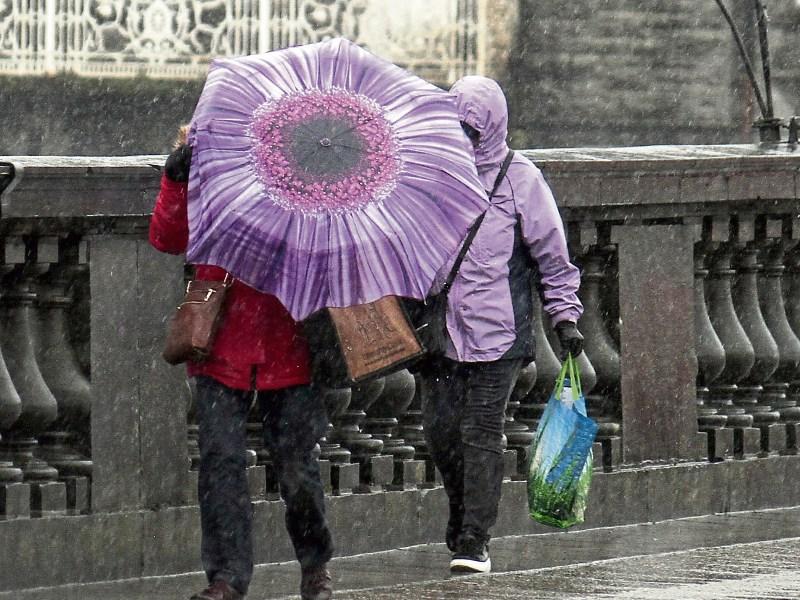 Outside the world of politics - Ireland’s second favourite subject, the weather, has been down right miserable. Pictured are two brave souls trying to cross Sarsfield Bridge Picture: Michael Cowhey

BY the time you read this, we could well have a brand new Government and the ship of state could be sailing steadily through calmer waters. Stranger things have happened, especially in the past week or so. But, at the moment anyway, I have to say that all I’m feeling is the instability, combined with undue anxiety and a constant sense of mal de mer. I can’t even find my feet, not to talk of my sea legs.

But don’t mind me! Instability is my second name. I can’t climb a ladder anymore without feeling the force of gravity dragging it from under my feet. Every time a new storm appears on the met office horizon –and that’s every second day now – I have to be physically restrained from trying to tie down the roof before battening the hatches. ‘You’re over-reacting, as usual,’ I’m told by my nearest and dearest, in between stifled yawns, as I stock the presses with tinned food and vitamin tablets. They’ve never known anything but stability themselves, and a fat lot of good that ever did them, they say ruefully.

They may have a point there, because some economists would argue that too much political stability over too long a period of time can be detrimental. It can lead to complacency – not to talk of all kinds of cronyism and political skulduggery. Instability in small doses could be good for us. Keep us on our toes! Right!

For all that we haven’t been as stable as we thought we were in recent years. I would have put us among the most stable economies in the world because of our impressive performance since the crash. But the World Bank wouldn’t agree. In the 2018 rankings of stability, we were down at 24th – way ahead of the Yemen, which came last, but still behind countries like Uruguay. All I can think of is that the World Bank somehow sensed some latent civil war animosities in the Confidence and Supply Agreement that held us together for so long.

Nevertheless, political instability is no joke for those of us afflicted by vertigo and disequilibrium. So the sooner they cobble a government together now the better it will be for all of us. I say ‘they’, because there’s no point coming back to us again for a solution. We don’t like to be told to try harder. Anyway, some of us are on the crest of the tsunami at the moment and the rest of us are just submerged in the Jetsam. A few of us, however, are dizzy from the instability and some others of us are simply ditzy. But all of us are in a vacuum, and, as everyone knows, nature abhors a vacuum and if we don’t fill it soon we’ll find ourselves in a black hole.

Astronomers have recently discovered strange signals coming every 16 days from a dwarf star, billions of light years away in space. Such unprecedented regularity is astounding and suggests something truly bizarre. But only that the source is so far away, I’d have said it was the sound of our elected politicians involved in the formation of a government going through the motions and then trying to pass the buck. Or is the analogy too ludicrous to even contemplate?

So, despite our reluctance to be re-examined, if a second election is the only way to steady the ship, then so be it. Otherwise we’ll all be staggering from pillar to post as the instability continues. The rest of the world will think we’re drunk and say we never lost it. But I don’t think that ideologies that are poles apart should be forced together to create a government. Stepping up to the plate is never a good idea if it has to involve the abandonment of deeply held principles in pandering to the electorate and satisfying the so-called appetite for change. Change is always risky and anyway voting for a change of government is not the same as voting for the suppression of long held and hard fought loyalties and principles.

One of those is freedom of speech and already there are threats from shadowy sources to those sections of the media that haven’t been wildly enthusiastic of the new order, suggesting a monitoring of the Press. The leaders of the party which won the popular vote need to dissociate themselves quickly from those shadowy despots before expecting anyone to talk to them, regardless of what their electorate wants or what the mood for change might dictate.

Meanwhile, in the midst of all this instability, all I can do is to try and stay upright myself until the storm has passed.