Don't Mind Me: Half-empty glass of the health service 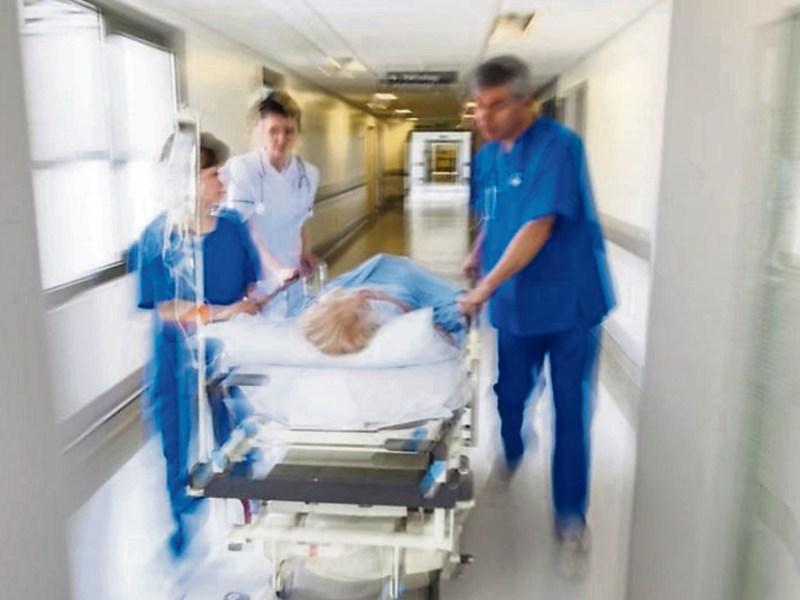 JANUARY is a wicked month, even when it’s dry. Just three days into dry January, I tripped over a mat in the kitchen and fell forward with a glass in my hand. The glass - like every other glass I’ve ever come in contact with in my life – was half empty. I know exactly what you’re thinking, but strangely, it wasn’t like that at all.

I had been clearing the table after the dinner and found that hubby had left half his glass of milk behind him. It had a funny taste, he insisted. I didn’t argue. We were nearly out of milk, and since we don’t have a cow outside in the paddock anymore that you could run out to in a hurry and tap for a quick jug of milk, I had given him a glass of my dairy-intolerant grandson’s goat’s milk instead. But, as I might have known, hubby’s finely tuned palate decked it immediately.

Anyway when I fell, the glass broke in my hand and sliced quite a sizeable chunk off the inside of my right thumb. Even Florence Nightingale herself would have swooned away in a dead faint at the sight of the resultant damage. I just went into shock. My daughter, who fortunately was in the house at the time, rang Shannon Doc, while trying to rouse me from my catatonic state. They suggested that I go immediately to the casualty unit in Nenagh Hospital. “I’ll die on a trolley,’ I wailed as she bundled me into the car with four or five towels wrapped around my leaking hand. ‘Did you warn them,” I said, “that I’ll need a blood transfusion and maybe even a thumb transplant.”

I arrived at the hospital, sticking out like a sore thumb among the badly wounded. But this article, you’ll be relieved to hear, is not about my ordeal at all. Or at least it’s not meant to be. It’s meant to be a paean to Nenagh Hospital’s casualty unit, otherwise known as the Local Injuries Unit. You’d be amazed at the number of people who unintentionally injure themselves, especially in the post -Christmas period and the place has proved a lifeline to all such unfortunates. All I can say is that if the rest of the health service functioned even half as efficiently as Nenagh’s local injuries unit, then the HSE could truly take a bow.

It’s a veritable model of care and proficiency. I was seen immediately by a lovely young nurse and a pleasant young doctor who assured me that my injury looked bad, but definitely wasn’t life threatening. He called me a drama queen when I expressed fears that the throbbing digit might have to be amputated. “A few stitches and you’ll be right as rain,” he said. But first there was an x-ray to determine if any shards of glass still lurked in the bloodied thumb. “Impossible,” I said. “It bled like Niagara Falls at the height of winter and everything must have been flushed out.”

The x-ray came back negative and the suturing began. After the first stitch, I experienced an existential crisis and begged for a general anaesthetic or a horse tranquilizer, whichever was handiest. Used to dealing with wimps as well as the brave and the valorous, they gave me a local anaesthetic, but that didn’t stop me from pulling my hand away every time the doctor approached the injured thumb with a needle. He persevered, however, warning that he might have to transfer me to University Hospital Limerick if I didn’t co-operate and stay quiet. The very thought filled me with panic and the effect of that panic was better than any horse tranquilizer. I gritted my teeth, co-operated fully and didn’t move until the five stitches were inserted.

I have been back to the local injuries unit several times since and have met nothing but kindness, care and efficiency. Every visit so far has been a pleasure. Nobody is running around in circles and the atmosphere of calm that prevails throughout the unit is comforting and reassuring. What I’d love to know is why the rest of health service doesn’t operate with the same proficiency. It’s only a local injuries unit, admittedly, but it does service a local need without being burdened with the pretentions and cost of a ‘centre of excellence”.

The trouble now is that word has got out and the injured are coming from as far away as Limerick to have their wounds seen to in Nenagh. Hands off, I say.

This is a local facility for the people who live in the area and despite what the experts may say, health as far as I can see, has always been better served locally.