Don't Mind Me: Knock, knock it is a candidate at the door 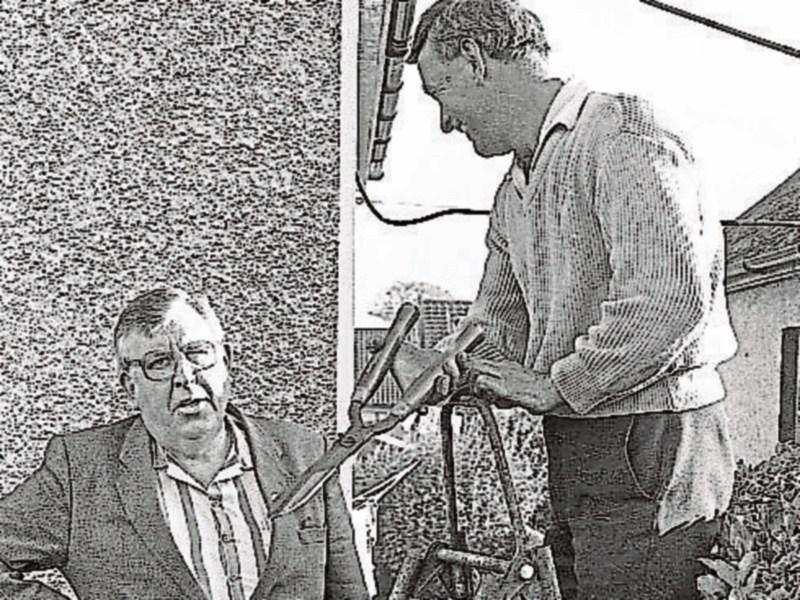 What kind of reception will general election candidates get at your door? Pictured is Jim Kemmy canvassing in Limerick City in June 1989

I DON’T know where we’d be at all if we didn’t get a chance to exercise our democratic rights every four or five years. All that pent up fury and explosive powerlessness would tear us asunder if we didn’t have a regular safety valve. Yet, we’re not convinced that our vote, whatever way we cast it, will change anything at all for the vast majority of us.

For all that, I can’t think of anything quite like a general election to bring out the worst in us. The campaign is just over a week old and already we’ve transmogrified into a nation of spleen-venting bellyachers. Or is that our usual form?

Maybe it’s the weather or the prolonged post-Christmas despondency, but the canvass trail looks anything but inviting on this occasion. Actually it looks positively hostile. I’d advise every candidate to employ a bodyguard or wear a suit of mail before approaching someone’s front door, because you’ve no idea how many voters I’ve heard uttering veiled threats about what they’ll do with any politician who dares to come a-knocking.

It could be just idle talk, of course. Our bark is worse than our bite, most of the time anyway, and courtesy usually wins over. Nevertheless, the antagonism is palpable, which might explain why most sensible candidates are concentrating on social media rather than the doorstep, where, at least, they can’t be physically wounded while projecting their respective images.

But this new development, I’m told, does not indicate any great cowardice on the part of the said candidates. There’re simply trying to capture the young vote, which, whether it actually comes out or not, will prove decisive in this election. And young voters, it seems, don’t usually answer the door bell.

But I have news for those currently taking to the online hustings. Young people are unpredictable and there are more malcontents among them than among the average Joe Soaps threatening to take someone by the throat on the doorstep. A study out last week showed that a person’s happiness and well-being starts to go into a steady decline at the age of 18 – just at the voting age. The two are not connected in any way, but obviously politicians need to be aware that it might be nigh impossible to please any voter under the age of 50.

Happiness levels start to rise again at 50, the survey found, which is strange because when I hit 50 myself, I fell into a ‘slough of despond’ from which I have yet to emerge. I wouldn’t mind only that I had already had a mid-life crisis at the age of 23. But don’t mind me, maybe it would be politic after all for politicians to forget the young voter and pay more attention to the happy-go-lucky elder lemons.

That said, I do have a couple of bugbears myself about this election, which I intend to throw at any canvasser who comes to the door – with all the grace and courtesy I can muster.

First, since the last election, a sizeable chunk of this Tipperary constituency has been appropriated by Limerick, which has left some of my neighbours feeling somewhat disenfranchised. You have no idea how splenetic this is making us. If Tipperary had taken a slice of Limerick territory in the middle of the League you might get an idea of how it feels. It has been exacerbated by some local canvassers in Killaloe and Ballina reporting that householders told them they don’t have a vote here. Their vote is still registered in Limerick, where they originated.

The ‘Voters’ List’, which in my day was officially known as the Register of Electors is causing some concern already, with many qualified people fearing that they may not have made it. I can’t understand why, 40 years ago, at a time when they were still attempting to vote from the grave, we were able to compile every year an updated and accurate list of eligible voters. It wasn’t perfect – people were inadvertently left off. People died and weren’t removed from the list in time. But it was as near perfect as circumstances permitted. It was compiled by each County Council with the assistance of their rate collectors, in collaboration with various official bodies such as the Gardaí and the army, before being published in draft form. It was verified each January in special electoral courts held by the County Registrars, before being published in final form in April.

The rate collectors are gone and the Gardaí have more to be doing now that going around to electoral courts verifying the existence or non-existence of voters. But it is the linchpin of our democracy, and if we can compile an accurate periodic census of the population, surely it isn’t beyond our power to draw up, by similar means, an equally accurate voters’ list every year?