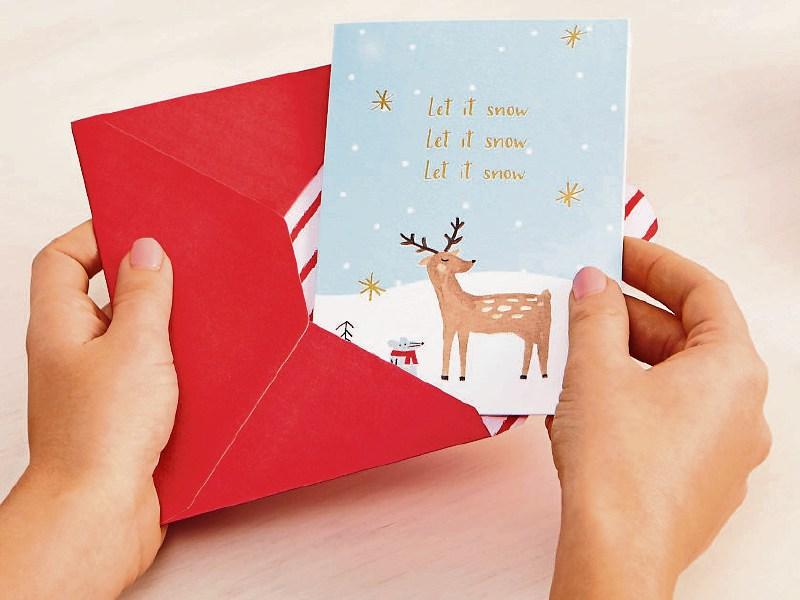 LAST year, in a fit of pique over an unrequited Christmas greeting sent on a holly festooned card to a friend I hadn’t seen for years, I solemnly vowed never to send another card. Next Christmas, I said, I’ll save myself all the bother, cost and potential rejection and a send a generic text message ‘Happy Xmas and a Prosperous New Year’ - complete with a smiley face in sunshades - to everyone I ever knew, or at least everyone whose phone number I hadn’t lost.

Anyway, what would Greta say if she knew that at this stage of my life, I’m still sending over two dozen quality cards every year, after spending a lifetime colluding with the card industry in the deforestation of the planet?

But you know something, dear Reader. When the time came, I just couldn’t do it. Texting a happy Christmas sounded too impersonal and then I learned that you can recycle your cards now and turn them back into a forest, courtesy of the Woodland Trust. Anyway, I couldn’t break with a tradition I’ve been following for nearly 60 years. Christmas cards may be on the way out and I may even be on the way out myself, but I’m not going to give up now. So, back in late October, when the leaves were still on the trees, I bought two boxes of Christmas cards without even looking at the design. When I looked at them last week, they sent shivers up my spine. Not only were they all snow scenes –and you know how I feel about snow – but they gave the distinct impression that the Beast from the East was back on the prowl.

Now, the big challenge is to get them out in the post. Nothing inspires my inner procrastinator more than the Christmas card chore. Invariably I’m just in time for the last post every year. There’s no excuse really, except that I can never find a pen when I need one. The house is full of pens, but where are they?

Anyhow, when is the last date for sending cards to America, for God’s sake? Or have I missed the boat?

Deep down, however, I love the Christmas card idea and I’d be absolutely devastated if it ever became obsolete. It’s the only way I’ve left of re-connecting in a personalised way with friends and former colleagues who are no longer a presence in my life. Last week, I got my first card of the season from a friend I haven’t seen since we left school in 1965. After over half a century, the hand writing on the envelope was still recognisable. You could never say that of a text message!

Whatever about the stress of getting the cards off in time, the sentimentality can be overwhelming. Sometimes, after writing 20 heartfelt messages by hand, I’m reduced to a weeping willow – or a slobbering idiot. Take your pick! Then I find I have an envelope left over and the sentimentality goes out the window to be replaced by sheer panic. Did I put two cards in the one envelope or did I put a card in the bin instead of in the envelope? Am I going to have to steam them all open again and find out why the numbers don’t add up?

Handwriting is not as easy as it once was either. I could write pages and pages once without a bother. Now, before I’ve got through ten short Christmas messages, I’m stricken with repetitive strain injury and have to rest my right hand for days afterwards. The handwriting itself is illegible. I can’t even read my own writing anymore. How on earth is An Post going to decipher it? How is the recipient going to decode it? Years of using technology have incapacitated my personalised communication skills.

Nevertheless I love getting Christmas cards with personal messages and cheery good wishes. Even those that wish me a prosperous New Year, I accept without even a hint of a cynicism. You’d think that after approximately 1,200 such wishes from all and sundry over the afore mentioned 60 years, that I’d be a rich woman by now. But unfortunately, I’ve yet to experience a prosperous New Year.

My big fear, writing this, is that the exchanging of Christmas cards – which is already in serious decline – will die out and leave us all the poorer for its passing. ‘Woke’ people frown on such outmoded ideas. An Post which has most to gain by the preservation of the practice certainly isn’t helping by charging a euro to send a single card. Surely they should offer a special nominal rate for postage stamps on unsealed Christmas cards and encourage us to continue? It should do wonders for peace and goodwill and I’m sure the planet can take it.

Meanwhile, in case I don’t make the post in time, a very happy Christmas to everyone.