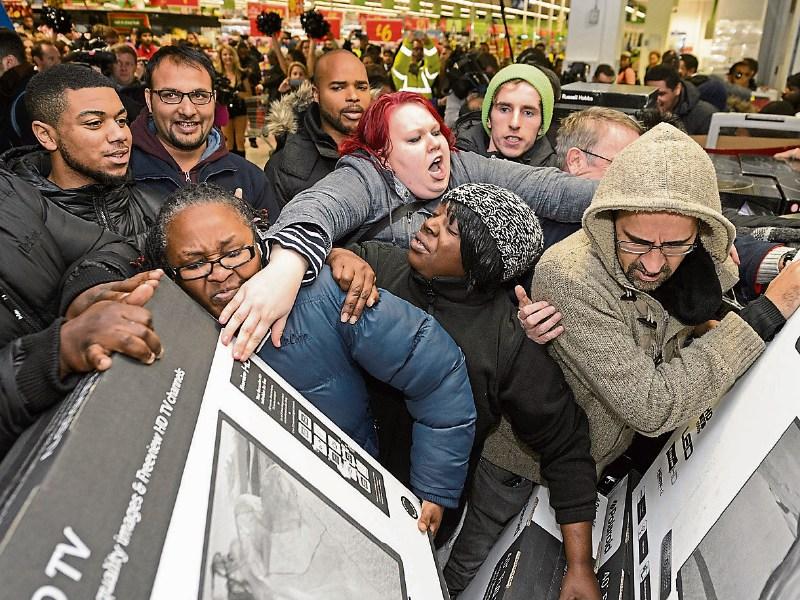 Black Friday, Cyber Monday and Thanksgiving are Americanisms we can do without claims Patricia

I’M the very worst kind of consumer. There’s nothing in the world I like better than getting a good bargain – even if it’s something I didn’t want in the first place.

It’s a good thing that I’m not within an ass’s roar of the nation’s ‘rich list’ or I’d cover the planet with ‘tat’, all wrapped in plastic and procured at a 50 per cent discount. But a bargain is a bargain and does wonders for the psyche, and although it’s years since I got one, I’m always on the look-out for a bit of self-affirmation.

You’d think then that I’d be in my element in advance of ‘Black Friday’. Except that Black Friday began yesterday (as I write) and now threatens to last until at least Christmas Eve, leaving me somewhat disorientated as far as bargain hunting is concerned.

But it’s not ‘Black Friday’ that bothers me so much this week as ‘Thanksgiving’. Everyone I know is having a turkey this Thursday to celebrate the festival initiated by the Pilgrim Fathers and endorsed by Abe Lincoln himself. As far as I know it has nothing at all to do with us. Actually since we’ve lost the Faith in such numbers, I don’t even know who we might be giving thanks to. Anyhow, we’ve embraced the festival wholeheartedly and before we know it we’ll all be indulging in ‘Thanksgiving’ and giving ourselves another holiday. Who, or what, we’re thanking is irrelevant.

I won’t be celebrating ‘Thanksgiving’ myself, because I have enough on my plate already with Christmas creeping up on me unawares, accompanied by serious bouts of terrifying seasonal stress and panic. Also, Black Friday dawns the following day -or it should, if it hadn’t already started a week ago – and I greatly fear that the country will be hit by a tsunami of consumerism that will put the Planet in a tailspin, with or without my participation.

Personally, despite my penchant for bargains, I regard ‘Black Friday, as an American import that we could well have done without. Even the title freaks me out because of its sinister connotations. It feeds our manic consumerism and makes idiots of us all. We buy things we don’t need or want simply because there’s a 50% discount on the price and it doesn’t matter if the item isn’t even worth the 50 per cent we fork out. We all lose the run of ourselves at the sight of a bargain, but we’re not quite as bad as American shoppers who have been known to lose their lives as well in Black Friday stampedes. It’s a dangerous addiction and I don’t know how we’re going to be rehabilitated.

Even if we do manage to wipe ‘Black Friday’ from the Christmas calendar and detox completely from the compulsive shopping drug, we’ll still have to contend with Cyber Monday which occurs on the first Monday after ‘Thanksgiving’. Why does everything have to revolve around ‘Thanksgiving’ anyway? Cyber Monday holds out even more on-line inducements to make us part with our cash. Online shopping is the phenomenon of our times. But honestly, I can’t even allow myself to window-shop online in case I press the wrong key by mistake and order something I can’t afford – like a Ferrari.

Now, wouldn’t you think that all this black and white craziness would be enough to satiate our deep-seated urge to splurge demonically? But we still have to brace ourselves for ‘Green Monday’ which falls this year on December 9, and if you can survive ‘Green Monday’ without losing your shirt, then you’re a better person than I am. I had never heard of it before and assumed because of the title that it was a day of reparation, the day when rabid consumers gave something back to the Planet. I was wrong, of course, Green Monday is for people like me who missed the boat on the Black Friday and Cyber Monday bargains and are now ripe for a right fleecing.

But what I want to know is this. What ever happened to December 8th, the traditional Christmas shopping day in this country, when rural Ireland came to town en masse to enjoy a day’s shopping in the real world and to boost the economies of towns and cities? It was a much more relaxing, festive and enjoyable experience than all the ‘Black Friday’ madness in the world.

By the way, I’m still on the look-out for bargains. But since Black Friday arrived prematurely this year, I now fear that I may have to wait for the January sales, that is, if there’s going to be anything at all left by then.