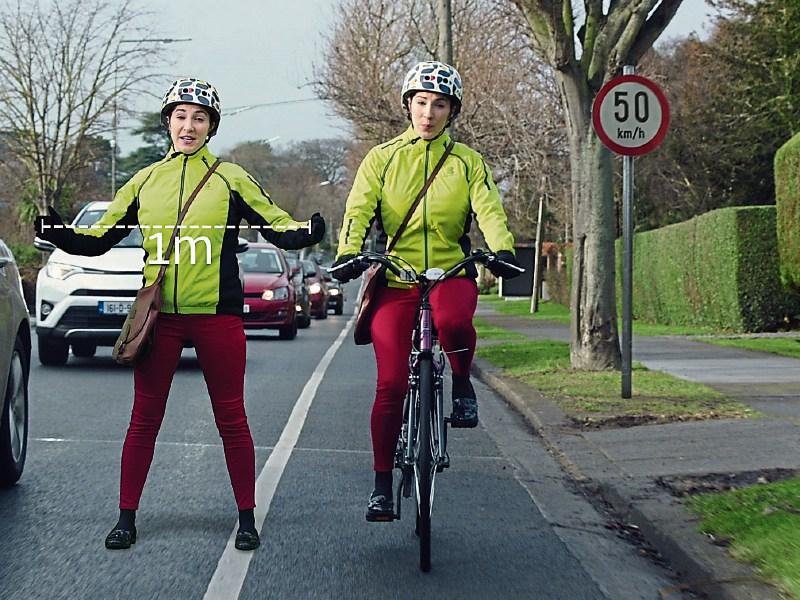 WE Irish really are very territorial. And why wouldn’t we be seeing that we never even got to have a colony of our own - although we still haven’t given up on Rockall? But nowhere does this inherent territorialism and sense of entitlement manifest itself more than on the public road. We all think we own the road, which in turn leads to all kinds of aggressive behaviour among different types of road users.

Motorists who thought they owned the road up to this have just been relieved of their illusions by Minister Shane Ross who is about to introduce ‘dangerous overtaking of cyclists’ to the list of current motoring offences. I’m all for the initiative, of course. Road safety has to be paramount. But with motorists finally put in their places, I greatly fear that cyclists will now think that they own the road.

“The bicycles go by in twos and threes. There’s a dance in Billy Brennan’s barn tonight . . . .” wrote Kavanagh in the 1940s. Presumably there wasn’t a car in sight. But they still cycle two or three abreast on my road. Only it’s not my road. It’s the public road. If it were mine, it would be in better shape. I think it was originally designed by a herd of cattle meandering all over the place looking for richer pastures. It is very narrow and has more bends than a corkscrew. In some parts, you either have to pull in to let an oncoming car pass, or you have to reverse down ‘Big Mary’s Hill’ and risk submersion in the Shannon. If you were to give two cyclists riding abreast a metre of space when overtaking, you’d have to mount the ditch and drive through the field. Alternatively, you could stay behind.

Now, in my opinion, dangerous overtaking of anything – pedestrians, tractors, cows and cars – is absolutely criminal. The only reason I can see for singling cyclists out for special protection, is because cyclists are aboard dangerous vehicles themselves and sometimes are only the wobble of a wheel away from disaster. They are particularly vulnerable. Surely it behoves cyclists then to take some extra responsibility for their own safety, like always travelling in single file and pulling in when there’s a queue of frustrated drivers building up behind them or dismounting and letting the cars go. Drivers of gigantic tractors always do this on my road out of consideration and courtesy, but it’s been many years since I’ve seen a cyclist pulling in at a gateway.

Meanwhile, the automobile has become the bête noir of the Irish highways? The two car driveway is no longer a status symbol – more like a symbol of environmental recklessness and road anarchy now. Who needs a car anyway when one’s ancestors got by on shank’s mare and Marie Antoinette travelled all the way from Vienna to Paris in a horse drawn carriage to meet up with her betrothed. Drivers, already weighed down with exorbitant insurance costs, hefty road taxes, multifarious codes and regulations, wandering animals and the incessant bleating of sanctimonious planet savers now have to contend with the unsavoury reputation for dangerous overtaking of cyclists. Is that really fair?

I haven’t a doubt in the world that there are drivers who indulge in dangerous overtaking, but most of us don’t. But we’re all being painted with the same brush while cyclists are being sanctified en masse. Only last week I was overtaken by a dangerous cyclist, who crept up on me on the inside and cut out in front of me on the Bridge of Killaloe. He probably wouldn’t have cut out in front of me at all if it weren’t for the fact that he was cycling on the pedestrian side of the bridge, with a couple walking towards him with a buggy.

In my day, which of course was the next best thing to Utopia, we dismounted from our bicycles on narrow country roads when cars came up behind us. In hindsight, maybe we were being a bit too deferential to motorists, seeing that the person behind the wheel was usually either the doctor, the parish priest or the teacher. It was seldom a woman.

Now before you all get hot under the collar and accuse me of being anti- cycling, let me assure you that I spent most of my youth on a bike. Otherwise I’d never have got anyplace. I’m well aware of the fact that cyclists are vulnerable road-users and that most of them are responsible and law abiding, not to talk of being haloed by the new ethics of healthy living and emissions free travel. But some of them, like some drivers, are arrogant, selfish, territorial cavaliers who believe that they have a God-given right to the road. New rules are welcome, but what we all need, saints and sinners alike, is a lesson in road manners, tolerance, patience and civility so that we can all share the roads without causing any more bloodshed.