Don't Mind Me: Sorry Leo but beef is for dinner 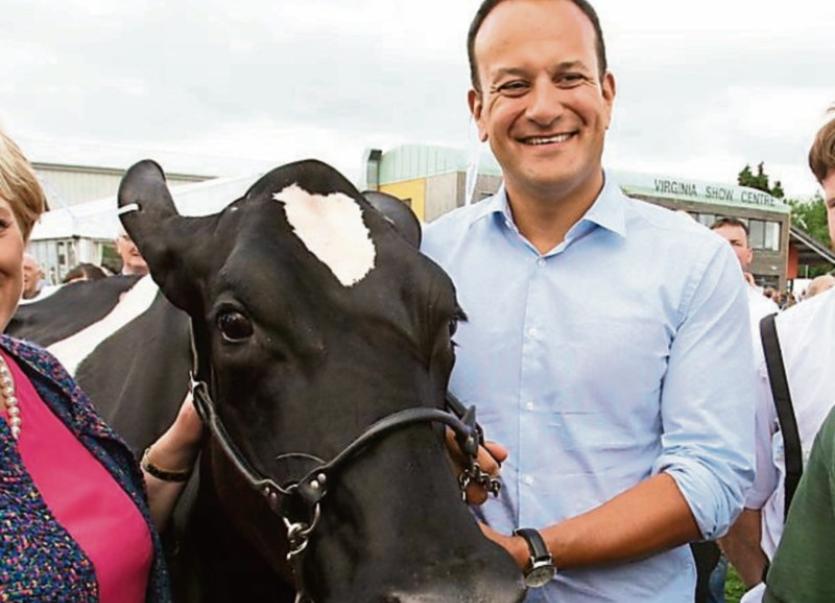 What kind of bull is this... does Leo Varadkar expect us live off spuds alone?

A WARNING before you read on! I’m a bit biased when it comes to farming, so don’t take too much notice if I’m suddenly on the defensive – or the warpath, as the case may be.

The thing is I’m sick and tired of farmers being blamed for everything that has gone wrong with the environment since Neolithic man first dug the soil around Lough Gur. Now it seems that Queen Maeve of Connacht has a lot to answer for too; she should have left the Brown Bull of Cooley where he was. For all we know he might have been responsible for the last Ice Age.

The finger is now being pointed at Irish farmers in the global campaign to save the earth from destruction. Our vastly expanding herd of cows is, it seems, producing too much methane gas and leaving an enormous carbon footprint. On top of that we’re all eating too much red meat and dairy products for the good of our health. Our Taoiseach has announced that he is cutting back on his beef intake. So what does that tell us?

Nothing much, except that Mr Varadkar is a populist who would eat his hat if he thought it would win him even more favour with the liberal masses. Maybe he should ground the Government jet while he’s at it and stay at home for St Patrick’s Day.

Now I’m definitely not going to say ‘poppycock’ to last week’s scientifically based report that states baldly that we’re rearing too many cows and consuming too much animal flesh. You only have to take a walk up the road where I live and look at all the empty burger snack boxes tossed from passing cars to realise that something is distorting the brain cells of this generation. I like to think that it’s not the meat, but the chemicals used in the processing that makes people act like that in a scenic locality.

I’m not going to say either that a surfeit of red meat is good for anyone. Look what happened to Henry VIII. Suffice it to say that a balanced diet is everything and that fresh beef is still a luxury that not everyone can afford. As for the carbon footprint left by the herds of buffalo now roaming the Golden Vale, all I can say is that there are single farms in New Zealand with bigger herd numbers than you’d find in an entire Irish county. Nobody is pointing the finger at them and saying ‘stop it; you’re going to destroy the planet’.

Admittedly I’m paranoid, but I can’t help feeling that this anti-meat/milk campaign has been orchestrated by Brussels in order to bring a bloodless end to the Single Payment – now that the UK won’t be around to contribute to it anymore.

The paranoia, by the way, is justified by memories of the 1980’s when farmers were lambasted for supposedly causing the first major nitrate-fuelled growth of algae on Lough Derg. It turned out afterwards that the housewife, who went on a detergent -buying spree at the time was every bit as much to blame, not to talk of municipal authorities around the lake who were allowing public sewers to flow freely into the lake’s tributaries.

I’m not against vegetarianism or veganism. People have a right to eat whatever they want, so long as they don’t try to make the rest of us follow suit. We all know, or should know at this stage, what is good for us, mentally and physically, and some of us are allergic to nuts. The processing of the food is another issue altogether and probably causes more pollution. It makes me long for the days when the milk came straight from the cow.

I did become a vegetarian once myself, when I was about eight, after coming home from a neighbour’s one day shortly before Christmas and finding ‘Gussie’ our pet goose – named after the hero of the Curly Wee cartoon - hanging upside down dead behind the shed door. The memory of that, and the Christmas dinner, haunts me still. But it didn’t put me off my meat for long, mainly because meat, apart from the daily ritual of bacon and cabbage was scarce enough in my childhood diet.

All I know for certain now is that even if Irish farmers stop raising beef and dairy cattle, the meat and the milk will come from somewhere else far less wholesome. At that stage I might well go back to being a vegetarian again.

But, because of the race memories, surely you don’t expect me to put all my faith in the potato crop.