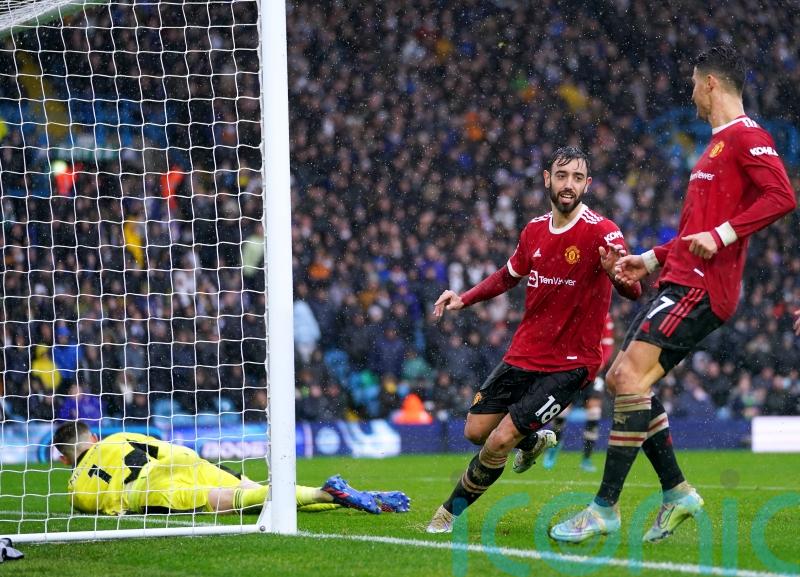 Bruno Fernandes believes Manchester United are developing a set-piece threat after becoming the last Premier League team to score from a corner this season.

Skipper Harry Maguire headed home from United’s 140th top-flight corner to put Ralf Rangnick’s side on their way to a 4-2 victory at Leeds on Sunday.

It ended an incredible run which England defender Maguire described as “embarrassing”, although Raphael Varane saw his effort from a free-kick disallowed in the 1-1 draw at Burnley earlier this month.

“We are improving on that. We have scored against Burnley too, but unluckily for us the referee saw a foul there.

“(If we) keep on doing the right things, we will score more goals from set-pieces.

“But the main point is scoring goals. If it is from set-pieces or whatever it is, we have to score.”

Portugal playmaker Fernandes netted United’s second before half-time at Elland Road, the 49th of his Red Devils career since joining from Sporting Lisbon two years ago.

It was a victory which gave United a four-point advantage in the race for a top-four Champions League spot, although Arsenal, Tottenham and Wolves all have games in hand below them.

United were pulled back to 2-2 by Leeds before substitutes Fred and Anthony Elanga made decisive contributions, and Fernandes told MUTV: “That (2-0 lead) was probably the problem for us.

“We think we are in a great position and we started a little bit sloppy on the passes under pressure and they get away with two goals.

“Obviously I think the second one was a foul. When I passed the ball with my right foot he (Adam Forshaw) stamped on my left.

“But this is England. They said it’s English football and I have to get used to it, so it’s OK.

“Either way the most important thing was the reaction after. That reaction makes us win the game.”

Fernandes had special praise for United’s second-half scorers and Scott McTominay, who was involved in a relentless midfield battle on an Elland Road pitch saturated by incessant rain.

“Fred is a player that works very hard and doesn’t get a lot of praise,” Fernandes said.

“Him and Scott are two players who are really important for us in many games.

“I’m really happy for him and also for Anthony, who got his goal. He’s a kid that deserves that.

“The important point for us was understanding if we keep doing the right things, and taking the right decisions, we can win the game.

“Even if you concede goals you have to keep making the right decisions.”