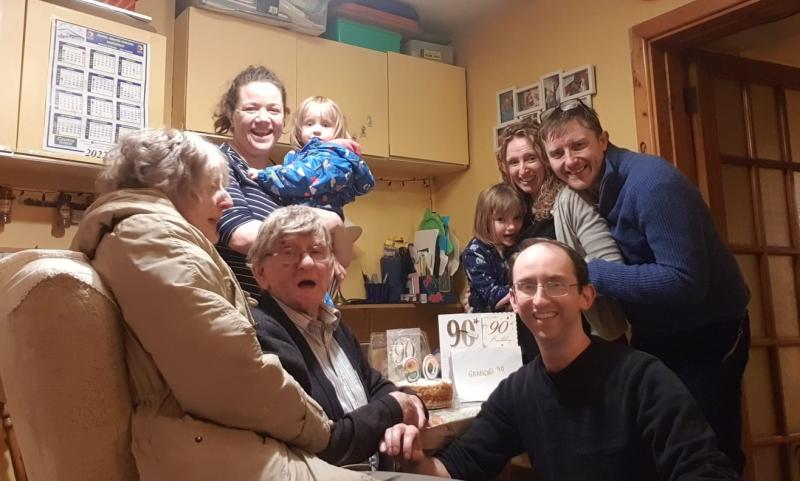 Limerick comedian and entertainer, Paschal O' Grady, who lives in Ballinacurra, celebrated his 90th birthday along with close family.

A LOCAL Limerick legend who was one of the first comedians to appear on RTÉ television on its opening night in 1961, celebrated his 90th birthday party.

Paschal O’ Grady and Tom O’ Donnell were part and parcel of Limerick city, forging a lifelong friendship that lasted more than 40 years, until Tom’s passing in February 2013.

Born on Ellen Street in 1932, it wasn’t until Paschal joined the local Boy Scouts that he met his soon to be comedy partner Tom, who shared his lust for life and laughter.

Tom, a Scout Master at the time, began setting up plays in St. John’s Pavilion, with Paschal in attendance. Slowly but surely the pair developed their own comedy duo.

Although gradual to begin with, their local, national and even international stardom took quite the meteoric rise.

His daughter Eukaria, a school principal in Limerick, recalls the pair performing stunts on the roof of Todd’s (now Brown Thomas), hanging off of planes in Shannon and filming all over the country.

“Even when I got married last week, he danced down the aisle after me. It was all about him at the end of the day. He’s a great messer,” she told the Limerick leader, of her now 90-year-old father.

What made the two so popular, Eukaria mused, was that Limerick people really enjoyed them in a time when live entertainment was a lot more popular.

“They were really good at going to different Town Halls, putting on shows and involving local people. They plated instruments as part of their act too,” she said.

Slowly but surely, she continued, their name travelled. In the 60s and 70s, they played in the Royal Albert Hall in London and Carnegie Hall in New York, twice. Each show was a sell-out performance.

Health wise, Paschal is doing fine, she informed. Although not a drinker, he frequently heads down to Souths or Fennessy’s pub in Ballinacurra to have a cup of tea and play the harmonica for those in attendance.

He still heads to Milford Care Centre to dress up, sing songs and tell jokes, something which he has been doing with his wife Marie for the last 10 to 15 years.

“He loves putting on a show for people. That will never change,” she conceded.