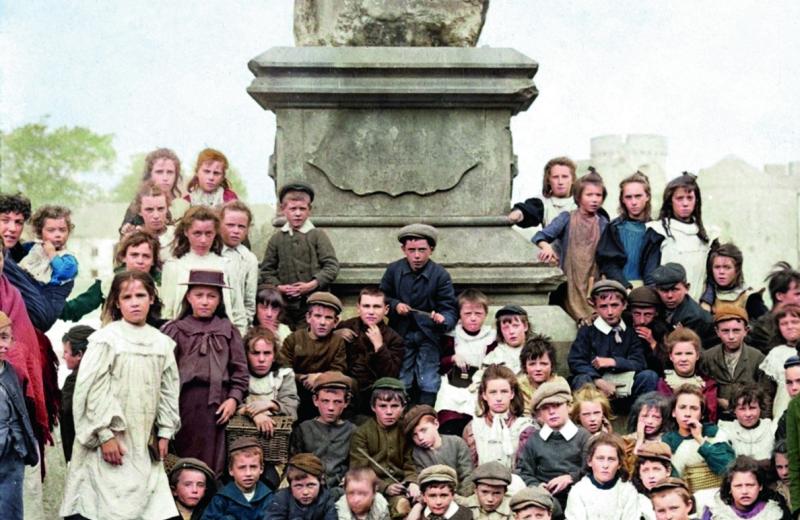 A group of children at the Treaty Stone in 1903. This photo is just one of the many recently colourised archive shots that feature in Old Ireland in Colour

Historic Limerick images have been brought back to life in a best-selling illustrated book series depicting a “type of Ireland that people are no longer familiar with.”

Old Ireland in Colour 2, by John Breslin and Sarah Anne-Buckley, a sequel to the bestseller first produced in 2020, captures five iconic Limerick moments in colour.

Co-author and NUIG history lecturer Sarah-Anne Buckley told the Limerick Leader that the project has “captured the imagination of the public” and that the colourised images have “created a deeper sense of empathy” with our history that washes deeper than words.

“There’s a real love for history in this country, whether that’s family, local or national. Since its release, we’ve been informed that our book has been used in reminiscence therapy and in national schools across the country.

“In both books, we tried to capture the majority of people and we wanted to reflect what life was like in 19th and 20th Century Ireland. Over that 100-year period, we had massive population decline shown through images of poverty,” the social history enthusiast stated.

County Limerick first features in the 150-picture collection through a revitalised image of a Comrade in Arms, depicting a wounded soldier being treated by medics at Kilmallock during fighting between anti-Treaty and Free State forces in the area in 1922. Included is a 1903 colourised image of a group of children near the Treaty Stone (main image) where the Treaty of Limerick was signed in 1691, signaling the surrender of the city to William of Orange. The same stone can now be found at the north end of the Thomond Bridge.

Also featured is an IRA prisoner under escort in 1922; a mural painted by Limerick-born Sean Keating at the 1939 New York World’s Fair, and the story of Lady Mary Heath.

The book reads: “Born Sophie Peirce-Evans in Limerick, Mary Heath was the first person to fly solo across Africa, when she made the 10,000-mile journey from South Africa to London. A woman of firsts, she became the first female commercial pilot in the UK.

“The International Commission for Aviation had previously stated that women’s menstrual cycles made them unfit to serve as commercial pilots. An athlete herself, in 1925 she spoke at the Olympic Congress in Prague campaigning to have women’s athletics accepted at the Olympic Games.” Sarah-Anne added that the project is a really good way to introduce people to history in a bite-sized, relatable format. For those already interested, their intrigue can be extended through detailed captions leading to further sources and reading.

“We have had amazing feedback from national schools. We have found that the images of younger people, from different economic backgrounds, have been especially popular.

“Primary school children love looking at images of other 10 or 11-year-olds from a different time period. It gives such a breadth to younger people. The past is important and it’s something that we should all be able to relate to,” the Cork-born lecturer, who has incorporated the images into her classes concluded.