Damn the torpedoes: Remembering the 20 sailors who lost their lives on board the SS Clonlara 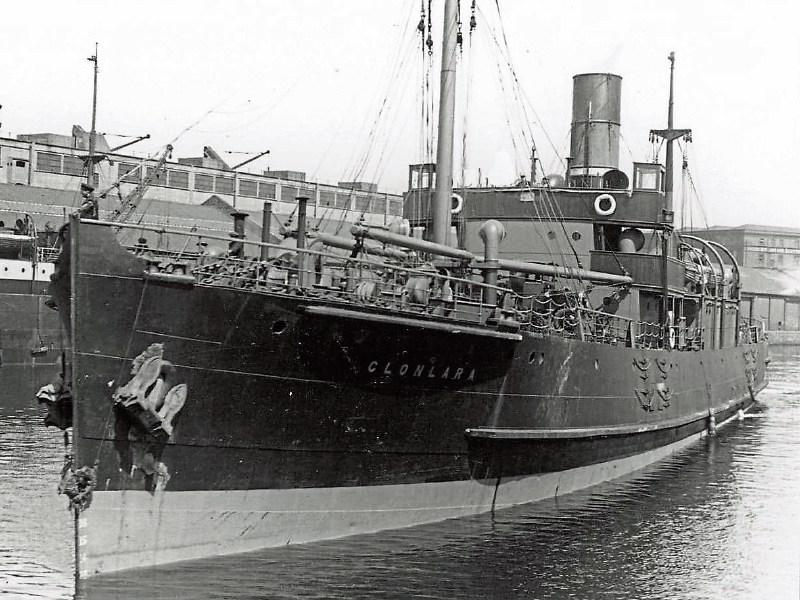 These days Clonlara is known throughout Clare and beyond for being a stronghold of hurling. Others know the village for its proximity to the Shannon River and the Headrace Canal. Very few people will know of Clonlara’s links to a ship wreck off the coast of Portugal.

The story of the wrecked ship – the SS Clonlara, began on Limerick’s O’Curry Street where the Limerick Steamship Company had its headquarters. These days an orthodontist has his practice here.

The Limerick Steamship Company traded from 1893 to 1970. In its early years the company ran routes along the Shannon Estuary and one of its better known boats on this service was an iron paddler named Shannon. The Shannon made regular stops at Kildysart, Cappa and Tarbert. During this time the company also operated routes to Galway and by the turn of the 20th century it also had sailings to Liverpool.

The Limerick Steamship Company had a lovely tradition of naming their vessels after local villages and town-lands - The Cratloe, The Kilbaha, The Coonagh, The Kilfenora, The Cahercon, The Doonass, The Luimneach and The Rynanna to name but a few. In April 1926 the company launched Steamship Clonlara, better known as SS Clonlara. Constructed by the Caledon Shipbuilding and Engineering Company in Dundee, Scotland, SS Clonlara weighed 1,203 tonnes. She had a sister ship called the Lanahrone. Lanahrone, interestingly, is the name of a small island in the middle of the Shannon River in close proximity to Parteen GAA Club’s pitch.

The hull of SS Clonlara was fitted out for carrying livestock and other general cargo. She could carry 53 cattle and 10 horses. At a push she could reach speeds of 12 knots but on a more economical burning of coal, her steam engines delivered a speed of 9 knots. Her maiden voyage from Emden in Germany to Limerick involved stops at both Hamburg and Waterford. At the helm on this maiden voyage was Captain McNamee.

The SS Clonlara spent much of her early years hauling livestock to England but by the mid 1930s this trade was in decline so the Limerick Steamship Company reassigned her to a fortnightly routing to Spain. On her outbound journey SS Clonlara would carry cargos of potatoes and cattle and on her home bound journey she would carry crates of fresh fruit. Throughout this period SS Clonlara worked alongside her sister-ship The Lanahrone.

The outbreak of World War II wreaked havoc on international shipping. Merchant vessels crossing the Atlantic and sailing the seas of Europe travelled in convoy with protection from naval ships.

In August of 1941 both the Clonlara and Lanahrone were sailing in the Bay of Biscay with Convoy OG71. This convoy was made up of 23 merchant ships and 13 heavily armed naval ships. 12 of these escort vessels were from the Royal Navy and the 13th vessel was a Norwegian Navy destroyer.

On August 19, as the convoy sailed through calm waters, a wolfpack of German u-boats attacked. The Alva, Aguila, Ciscar and the Norwegian naval destroyer were all torpedoed and sunken. The SS Clonlara crew pulled 13 survivors from the Alva from the waters.

Three nights later, on August 22, Convoy OG71 was once again under attack. U Boat 564, captained by Reinhard Suhren, 136 nautical miles west of the Portuguese city of Porto had the convoy in the sight of his periscope. The time was 29 minutes to midnight and the sky over the Atlantic Ocean was inky black.

Suhren ordered the launching of 4 torpedoes and moments later noted 3 columns of smoke rising into the sky. He believed that his submarine had sunken 2 ships and damaged 2 others but in fact they had only scored 2 direct hits. The direct hits were on Empire Oak and SS Clonlara.

SS Clonlara was on fire and rapidly taking in seawater. She sank to the bottom of the ocean floor taking the lives of 21 young men with her. 9 of these men were Irish born crew of Clonlara and the remainder of those killed were crew who had been rescued from the sinking Alva 3 days earlier.

As World War II progress Captain Suhren gained notoriety for being a prolific hunter of ships. The Nazi hierarchy decorated him many times over and he was invited to spend time with Hitler at his infamous Berghoff and Eagle’s Nest. He remained staunchly loyal to the Nazi regime, survived the war and died in 1984 at the age of 68.

Suhren’s U-564 - the U Boat submarine responsible for sinking the Clonlara didn’t enjoy the same longevity as its captain. On June 14th 1943 she was spotted above water level by an RAF bomber. The captain was unable to dive the vessels underwater due to damage already sustained so ordered his crew to engage the bomber with anti-aircraft fire.

Eventually the booming depth-charge bombs dropped by the bomber sealed the fate of the U-boat. 18 crew members survived the attack and were taken onboard another U-boat and brought to safety. The bomber, heavily damaged in the skirmish, had to ditch into the sea. It’s crew were rescued by a French trawler fishing nearby.

These days, the legacy of SS Clonlara is all but forgotten. There are only 2 monuments to the vessel and her doomed crew that I know of. One adjacent to Limerick’s Shannon Bridge and the other on the quays of Dublin.