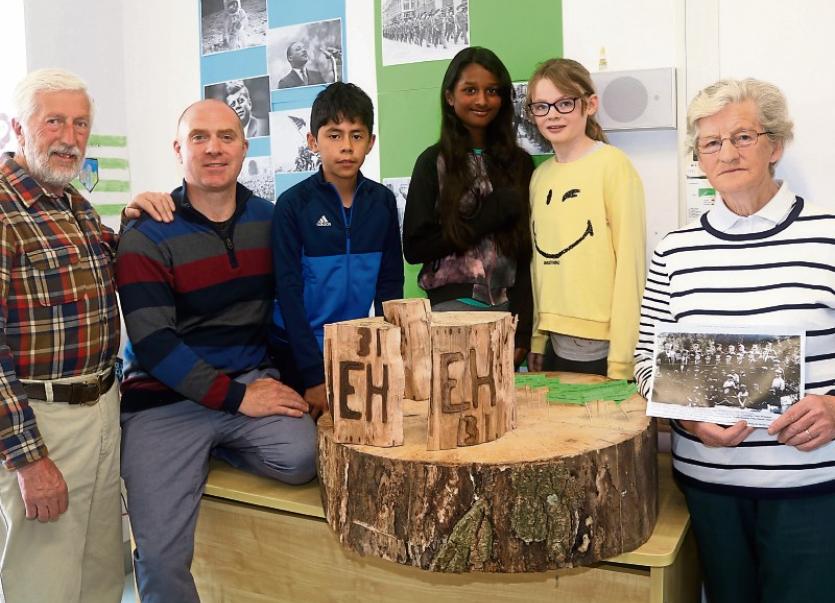 A LUCKY strike of an axe has accidentally led to the discovery of initials carved almost 90 years ago in a 131-year-old tree on the grounds of Limerick Educate Together National School.

Two initials, carved in 1931, have been discovered at the school’s grounds in Mungret, as the tree was being removed for health and safety reasons.

“It was pure luck due to the way the axe fell that it was all revealed,” teacher Peter Sadlier said.

“It's a little bit of graffiti in time and you can run your fingers along the exact groves that were carved in.”

Each year a tree grows, an extra ring grows on the outside so all of the prior years are buried inside. In 1931, two people carved their initials and for every year afterwards, the initials were buried.

“So, added Peter, “when the tree was cut down, the great big rings were left and one of them was broken with an axe. It just happened to strike the tree on the spot that revealed these carvings.

“We counted back to when the tree started to grow and it was 1887. Its spanned across three centuries.”

The discovery of the carvings has inspired a local history project led by students Patricia Valarkodi, Isabelle Binchy and Luke McMullen who worked with historian Nessan O’Donoghue on the project.

The students’ project has led them to make contact with Teresa Hayes, whose family farmed the land in the past and whose late father-in-law and late husband’s initials are a very close match.

The students have also accessed roll book records of both the boys and girls schools on their hunt to find students with matching initials and have discovered a list of pupils who may have signed the tree in 1931.

When the Jesuits founded Mungret College, they planted 4,000 trees which are now the huge trees in the new Mungret park, Mr Sadlier said.

“When our school moved into our new building we planted 400 trees in conjunction with the Tiny Forest Project and also the Trees on the Land initiative. We hope that in 200 years time our trees will be as impressive.”