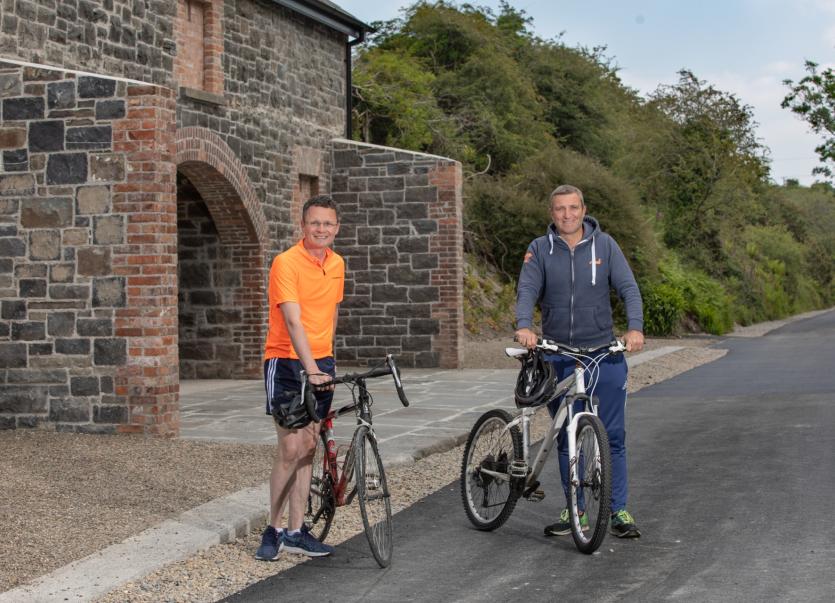 THEY may be political rivals but Limerick’s two government ministers - Patrick O’Donovan and Niall Collins - took to the new Limerick Greenway together this week to mark the completion of a €5m upgrade.

Work on the project began last year and the upgraded Greenway will open to the public next week ahead of an official opening later in the year.

Minister of State Patrick O’Donovan says he's delighted to see the work completed on the Greenway, which runs from Rathkeale to the Kerry border.

“This is a huge investment by the Government here in County Limerick and will form part of a much bigger Greenway that will link Limerick through to Kerry and onto the sea at Fenit. It will be a massive local amenity and a tourism attraction here in the area. Having secured the completion of major parts of the Old Railway like the Station Houses at Barnagh, and Ardagh, the Tunnel at Barnagh and the Viaduct at Garryduff, with Government funding, it has made the Greenway a major piece of infrastructure here in Limerick," he said.

Minister of State Niall Collins added: “This facility and attraction is of a quality and scale similar to Ireland's well known greenways in Waterford known locally as Déise Greenway and The Great Western Greenway in Mayor. Apart from being a significant resource for people here locally in West Limerick, it will also serve as a significant driver in attracting and harnessing tourism potential for West Limerick."

As well as linking to North Kerry there is also plans to link the Limerick Greenway to Limerick city and into East Clare and Killaloe.

"For my own part as a local minister I was glad to be involved in delivering this significant investment into the heart of rural West Limerick,” said Deputy Collins.

Both Ministers committed themselves to working to further developing the Greenway in Limerick and to enhancing the offering of the amenity into the future.

They have jointly pointed out that without the €5million in Government funding the project would not have been able to reach its current level.

Details of next week's opening will be confirmed in the coming days.